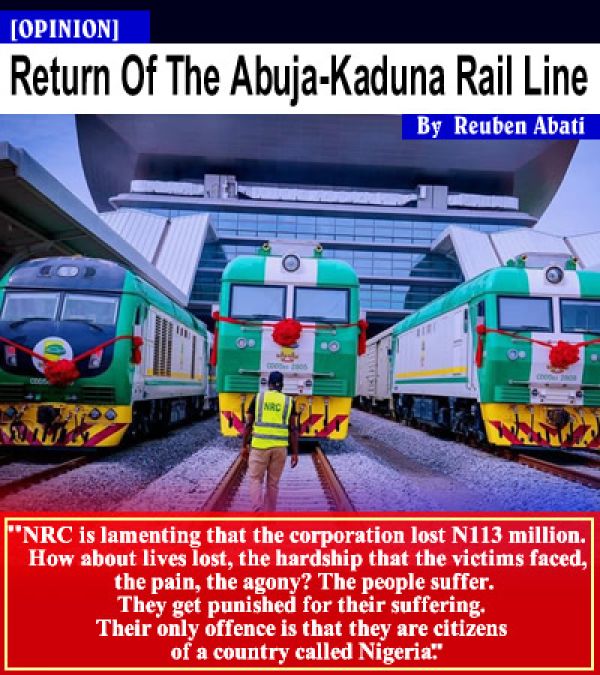 On March 28, 2022, a Kaduna bound train from Abuja, was attacked at a place called Katari in Kaduna State around 7: 45 pm. As is the case with many things in Nigeria where documentation is poor and students are just about to start learning history again after more than 10 years of the subject being excluded from the curriculum, till date nobody can give the exact figure of the number of passengers on that ill-fated train. What we all know is that it was attacked by rampaging bandits and terrorists, who had rigged up the train line with explosives, and who attacked the train, riding motorcycles and bearing dangerous weapons. The train was less than 20 minutes to its Rigasa station destination. The terrorists opened fire on the hapless travellers. More than eight persons were killed on the spot. About 62 persons were abducted.

Over 20 persons were injured. It was the beginning of a long nightmare involving negotiations with the abductors, the agony of distraught families, and a sad exposure of the vulnerability of the average Nigerian. The victims fell within a broad age and health range: young children, family members, the infirm, the elderly and the aged, including persons who were on various kinds of medication from which they had been cut off simply because they live in a country where insecurity is a problem and human lives have lost value. Those who died included Chinelo Megafu, a young medical doctor, Amin Mahmoud, an APC youth leader and Musa Lawal-Ozigi, secretary-general of the Trade Union Congress. Family relations of the affected persons were thrown into agony. As the Federal Government of Nigeria insisted that it was not prepared to negotiate with terrorists or pay ransom, families cried to high heavens. A few Samaritans led by Sheik Ahmad Gumi, Tukur Mamu, Professor Usman Yusuf and others stepped in to help, even if they created controversies of their own in the process. In the end, the abducted persons were released in batches on April 6, June 11, July 9, July 25, August 10, August 19, and the final 23 regained their freedom on October 6.  The Federal Government has tried to claim credit for ensuring the release of the last batch of abducted persons, but what is worth remembering is the needless loss of lives, and the general insecurity in the land which must be addressed - government has the primary responsibility to protect the people.

Following the attack of March 28, the Nigeria Railway Corporation (NRC) announced the suspension of services on the Abuja-Kaduna route to give time for the rail line that had been damaged in parts to be fixed. Two weeks ago, it was further announced that the rail line would now be re-opened for operations.  The Minister of Transportation, Muazu Sambo, during an inspection tour of the Abuja station said the train service was originally scheduled to resume by November 28 but that within a week, normal service along the route would re-commence.  Minister Sambo was quoted as saying that he had vowed that the trains will not return on that route until the last abducted person was released and that he was happy he had been able to keep that promise. Muazu became Minister of Transportation in July 2022. He only needs to be reminded that in fact before he was posted to the Ministry of Transportation, the Federal Government had tried to re-open that route by May 23. The attempt was greeted by public outcry. It was generally agreed that the government was being callous and insensitive, seeking to sell train tickets while the abducted persons were still in captivity. Affected family members threatened to picket train stations. At the time, Fidet Okhiria, Managing Director of the NRC claimed that the corporation was under pressure to resume operations. Nigerians refused. NRC was forced to change its plan. Now, yesterday, the trains returned along that route.

Mr. Sambo, the Minister in charge, says the NRC is 90% ready. Is the NRC ready? Can the people trust its managers? The Minister further claims that lessons have been learnt. Is he sure that indeed lessons have been learnt? What lessons exactly, if we may ask? Minister Sambo has said a lot of sweet things to rebuild public confidence and encourage people to travel again by rail between Abuja and Kaduna. But how many people will summon the courage to trust the NRC and government? When the first train left the Abuja station at 10 am yesterday, after eight months of inactivity on that route, the passengers were few. People have obviously learnt to be cautious and watchful. We have been told that there would be increased security along the rail line and inside the coaches and that some of the security men would be in mufti. The Inspector General of Police, Usman Baba has to that effect deployed police men, working with other armed personnel, drawn from the Police Mobile Force, K-9, Force Intelligence Bureau, Railway Police Command and the Explosive Ordinance Unit to protect lives and property along that route. But for how long will the security agencies sustain this? And where is the Civil Defence Corps whose primary responsibility is to protect national assets and infrastructure? Why are they not part of the arrangements? The sloppiness of our security operatives has been a major part of the security challenge in Nigeria. Even if the Abuja-Kaduna route is protected, what happens to other railway routes across the country? There have been reports for example of the vandalism of rail tracks in parts of the country, the most vandalized route being the 157-kilometres Lagos-Ibadan rail line. Apart from deploying armed personnel to protect the rail lines and the award of jobs to security contractors, many Nigerians would like to know if there is an electronic surveillance system in place to protect the rail lines across the country. Security in the 21st Century does not simply mean uniformed personnel. In April, the then Minister of Transportation, Rotimi Amaechi had disclosed that a proposal for the procurement of a N3.7 billion security surveillance solution was taken before the Federal Executive Council but this was rejected at the Council meeting of September 24, 2021. Questions were reportedly raised about the capacity of the recommended firm for the project. So, what has happened since then? An electronic surveillance system would definitely enhance whatever security measures the Federal Government wants to put in place.

The Minister of Transportation also says as part of new measures to be introduced, that train passengers would have to produce their phone numbers, and National Identification Number (NIN). Are they also going to ask for birth and marriage certificates? The proper identification of passengers should prevent the kind of confusion that occurred in March. The NRC had no proper manifest at the time! Till date the number of passengers on that Abuja-Kaduna train remains a matter of guess-work! Whatever documentation the NRC introduces this time around, every effort should be made to avoid unnecessary bureaucracy that could expose passengers to avoidable hardship. The bigger thing to worry about is the endemic corruption in the operations of the Railway Corporation. And let the point be made that the bandits who attacked the train in March were not passengers. They attacked the train along the route. There is no point treating every passenger like a potential criminal.

We have also been told that there would be no night trains.  This is simple common sense. Nigeria is not safe during the day, not to talk of night time. In broad daylight, people get kidnapped, and it is worse during festive seasons when too many bandits become more desperate. The March 28 train attack occurred around 7:45 pm, forcing many people to advise against night train travels. It is in order that the Federal Government has taken the people’s suggestion in this regard. It is all such a pity though. Every means of transportation in this country has become so expensive and risky. The roads are bad, the waterways are dangerous, air travel is costly and even the trains cannot be relied upon. A country of over 200 million needs an effective public transportation system and this must be a major issue for whoever wants to lead Nigeria going forward. In some countries, public transportation is considered so important, there are Ministries of Railways as in India, China, Japan, Bangladesh, Canada and New Zealand.

According to the NRC, the Federal Government lost N113 million due to the suspension of the Abuja-Kaduna train services for over eight months. In another account, the figure was put at N6.6 billion. What has now been decided in typical Nigerian fashion, is that fares would be increased. People died. Families lost their loved ones. Persons were killed in captivity. On one occasion, the bandits showed their victims being flogged.  They threatened to kill and maim. One of the kidnapped persons, Dr. Mustapha Imam is an Associate Professor at the Usman Dan Fodiyo University, Sokoto. He came home from India to give back to his country and share knowledge. He spent four months in captivity. When he was eventually released, he burst into tears. And now, NRC is lamenting that the corporation lost N113 million. How about lives lost, the hardship that the victims faced, the pain, the agony? The people suffer. They get punished for their suffering. Their only offence is that they are citizens of a country called Nigeria. Fares on the Abuja-Kaduna route would now be N9, 000 for 24-seater coaches, with immediate effect.  Empathy, security, and efficiency should be more important considerations for the Federal Government, not profit and greed.