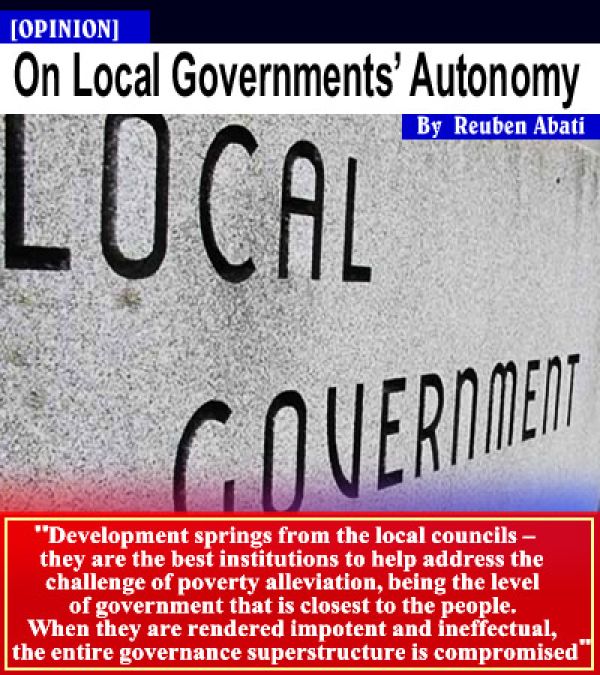 President Muhammadu Buhari hit the nail squarely on the head last Thursday, when he told members of the Senior Executive Course No 44 (2022) of the National Institute for Policy and Strategic Studies (NIPPS), Kuru that state Governors are stealing funds meant for Local Governments. The President’s assertion came about a day after the Minister for Budget and National Planning, Clement Agba had accused state Governors of being responsible for the high level of poverty among Nigerians, the majority of whom (72%) live in rural areas, and had been neglected. I felt the Minister of State was grandstanding and fishing for scapegoats.

The simple response to him is that both the Federal and other levels of government continue to fail the people, and that the crisis is that of leadership. But the President’s position on the financial autonomy of local governments is most deserving of further emphasis. One of the many good things that the present administration has done in the area of reform includes the push for the fiscal autonomy of the judiciary and local governments, both of which have been stoutly resisted by vested interests.  In May 2020, President Buhari signed Executive Order 10 to enforce the financial autonomy of the states’ judiciary and legislature. The States raised objections and went to court. In February 2022, by a majority of six to seven, the apex court ruled that the controversial Executive Order 10 was in conflict with the provisions of the 1999 Constitution with regard to the powers of each arm of government. The President was adjudged to have acted ultra vires.  The Order was an administrative directive that monies meant for the judiciary should be sent directly to their leadership without state governors pretending to manage the funds on behalf of both the judiciary and the state legislatures, while stealing part of same. There was yet another matter. In 2019, the Nigerian Financial. Intelligence Unit had issued guidelines with regard to local governments to the effect that not more than N500, 000 can be withdrawn daily, and that state governments must not tamper with local council funds, and can only act within the purview of the law as transit points.  The state governments went to court. But the Federal High Court in Abuja presided over by Justice Inyang Ekwo ruled in May 2022, ruled that the NFIU guidelines were in order to promote transparency and that the plaintiffs (the 36 state governments) had no case. The Court found that the NFIU within its enabling Act had powers to provide guidelines. It was the second time that a court of law would decline the attempt by state governments to resist NFIU guidelines.

The contentious issue is Section 162 (5), (6), (7) and (8) of the 1999 Constitution.  Section 162 (6) specifically creates “the State Joint Local Government Account”, and the subsequent amplifications as cited but this has been subjected to so much abuse with state governments and governors turning into supervisors and overlords of the local governments. All the 774 Local Governments in the 1999 Constitution are no better than appendages of state governments. Local government Chairmen are treated like aides of the Governors. The states rely on Section 162 (6) to collect monies due to the councils, and after charging administrative fees decide unilaterally on what they think the boys in the local governments should get. What is sent to them is barely enough to pay salaries, with some small change for the Chairmen and Councillors who by the way are so ignorant and incompetent, they are happy to collect crumbs. They are part of the problem! In March 2022, the National Assembly passed a bill to abolish Section 162 (6) of the 1999 Constitution, but for the bill to become law, it has to be passed by 24 Houses of Assembly. The Governors would not allow that to happen. Every Governor seeks to control the judiciary, the legislature and the local governments. Ours is a democracy of dictators. At some point, the State Joint Local Government Account has to be deleted from the Nigerian Constitution to provide a constitutional safety valve for the third tier of government.

Development springs from the local councils – they are the best institutions to help address the challenge of poverty alleviation, being the level of government that is closest to the people. When they are rendered impotent and ineffectual, the entire governance superstructure is compromised. However, no one should be surprised that some Governors have responded sharply to President Buhari’s latest attempt to put them on the spot.  Benue state Governor, Samuel Ortom, David Umahi of Ebonyi State, Governor Abdulrahman Abdulrazaq of Kwara state, Simon Lalong of Plateau State, Dapo Abiodun of Ogun state, and Nyesom Wike of Rivers State have all come forward to protest that they do not steal local government funds. President Buhari cited the specific example of one state Governor whom he refused to name. Whoever that Governor is, he would know himself. This is why every governor must speak up, otherwise we would be right to assume that all the Governors that are keeping quiet are the guilty ones. And that President Buhari knows what he is talking about. Members of the National Union of Local Government Employees (NULGE) were quick to support the President’s assertions. They should go a step further and name the thieving Governors and states that they know. The Supreme Court may have made a technical point about the Constitution but the President can give effect to his own words by prevailing on states controlled by his own party, and they are currently in the majority, to act with integrity and eschew the theft of local council funds. When the time is ripe, Section 162 of the 1999 Constitution should be amended accordingly to put a permanent end to the mischief of the state governments.