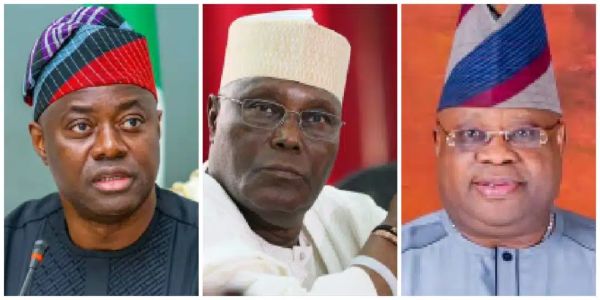 The presidential candidate of the Peoples Democratic Party (PDP), Atiku Abubakar, may have resolved to adopt the Governor of Osun State, Ademola Adeleke, as the South West leader of the main opposition party.

A highly placed chieftain of the party that spoke with Daily Sun said Atiku who is not on good terms with the G-5 governors may soon dump Makinde as leader of the party in the South-West.

The source disclosed that the PDP hierarchy led by the National Chairman of the party, Iyorchia Ayu is in support of Atiku recognising Adeleke as the leader of the South-West.

According to the source, Atiku’s camp regards Governor Adeleke as a ready and trusted ally of the PDP presidential candidate.

The source said, “Governor Adeleke has been working with Atiku’s supporters even before he won his presidential ticket. Many PDP members are aware that in the build-up to the Osun election, Atiku gave a lot of support to Adeleke.

“Turaki Adamawa was extremely happy at the outcome of the Osun election because it was a morale booster to members of the PDP ahead of next year’s general election.”

The speculation comes even as there are indications that Atiku may meet with the G5 governors this week.