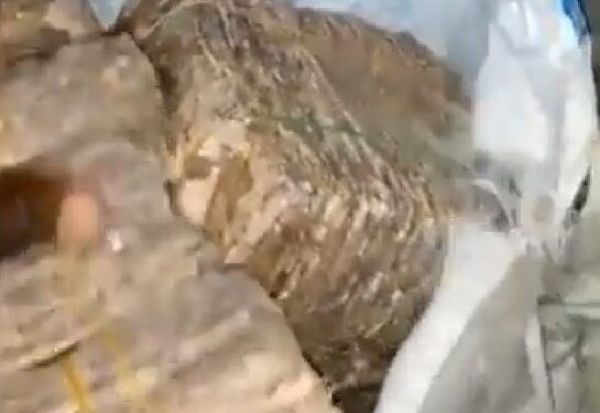 In a video making rounds on social media, bags of damaged naira notes were uncovered at a warehouse in an unknown location at the time of this publication.

The Nigerian currency was stashed in multiple bags for a long period in humid condition leading to its deterioration and decay.

The individuals seen in the video examined each bag with the hopes of seeing untampered notes, but all were already bad.

Meanwhile, money outside the banking system added N108.67billion to N2.84 trillion in October 2022 from N2.73 trillion in September, CBN’s money and credit statistics have revealed.

According to the apex bank’s data, currency outside the banks appreciated by 11.07 per cent Year-on-Year (YoY) from N2.54 trillion reported in corresponding period of 2021.

The money and credit statistics revealed that currency outside banks hit the highest record of N2.84 trillion in October. While defending its decision to redesign the Naira, the apex bank in October said some individuals were stockpiling huge amounts of cash outside the banking system.

CBN Governor, Godwin Emefiele, had in a statement explained that “Significant hoarding of banknotes by members of the public, with statistics showing that over 85 per cent of currency in circulation are outside the vaults of commercial banks.

“To be more specific, as at the end of September 2022, available data at the CBN indicate that N2.73 trillion out of the N3.23 trillion currency in circulation, was outside the vaults of Commercial Banks across the country; and supposedly held by the public.

“Evidently, currency in circulation has more than doubled since 2015; rising from N1.46 trillion in December 2015 to N3.23 trillion in September 2022. This is a worrisome trend that cannot be allowed to continue.”