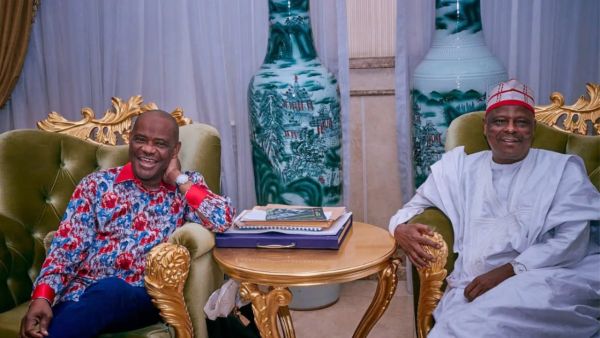 Nyesom Wike, governor of Rivers, has promised to give Rabiu Kwankwaso, presidential candidate of the New Nigeria Peoples Party (NNPP), “logistics support” for his campaign in the state.

Wike made the promise on Monday at the inauguration of roads in Emohua LGA of the state.

The Rivers governor’s pledge comes days after he made a similar promise to Peter Obi, presidential candidate of the Labour Party (LP).

Wike, however, asked Kwankwaso to  “remember” Rivers if he wins the 2023 presidential election.

“You’re a man of integrity. Unfortunately, we are not in the same party, but God will help at the appropriate time,” Wike told Kwankwaso.

“I said it to Peter Obi when he came, and I want to tell you now: If you are coming to campaign here, I’ll give you the logistics support for you to campaign.

“I am not afraid to say I will give you all the logistics support. You are selling yourself to Nigerians based on what you can do.

“We of integrity group will continue to support whatever is right — whoever will help this country. So, see Rivers state as your own. When you win too, remember us.”

Also, in what appeared to be a reference to to Iyorchia Ayu, national chairman of the Peoples Democratic Party (PDP) who was a former senate president, Wike said the party’s leadership didn’t take the necessary measures to prevent Kwankwaso from leaving the PDP.

“When you wanted to leave PDP, I came to your house in Abuja. I said, ‘Sir, don’t leave the party’. I pleaded with you; I came two times,” Wike said.

“I said ‘no; he is an asset to the party in Kano state. Kano is very important for our party. Therefore, whatever it takes, let’s keep him; let’s manage him’.

“They said ‘no, let him go.’ I said ‘the more, the merrier; we are an opposition party. We cannot continue to drive our people away. Whoever is angry, lets keep him’.”