Why is Yul different from your other children? – Pete Edochie quizzed, he responds 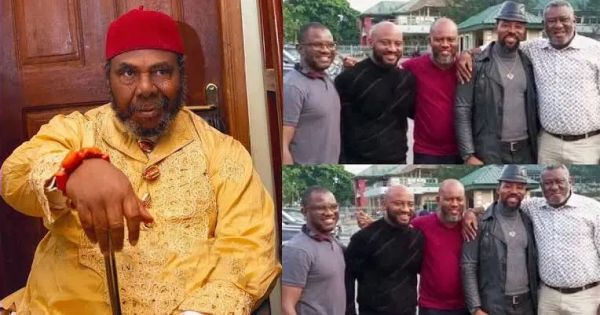 Nollywood Veteran, Pete Edochie, recently spoke about his children when he granted an interview with Vanguard News.

The renowned actor who got married to Josephine Edochie when he was 22 years old, have six children together, with two of them following in their father’s acting footsteps.

Recall that Yul, who is also an actor, shook the Nigerian social media space with the news of him marrying an actress, Judy Austin, as a second wife, despite his first wife, May, being by his side for years before his eventual fame.

During the interview, Pete Edochie, talked about how he feels regarding the scandal, and specifically answered question on why Yul is so different from his other children.

“He’s into show business and he tries to create controversies around himself. That’s why he has a lot of followers on social media.”

The interviewer continued: But why does it seems Yul is a child after your heart?

“All my children are after my heart. Whatever they do I am still their father, and I am very close to all of them. I don’t have a favorite one. And I didn’t raise them like that. Whatever you find in my house is accessible to all of them .

“I don’t contest their choices with them. If any one of them meets a girl and he’s in love with her and he wants to marry her, let that person go ahead and do so. I gave them the necessary education they require to stand on their own. I bought a car for each one of them when they graduated from the university.”