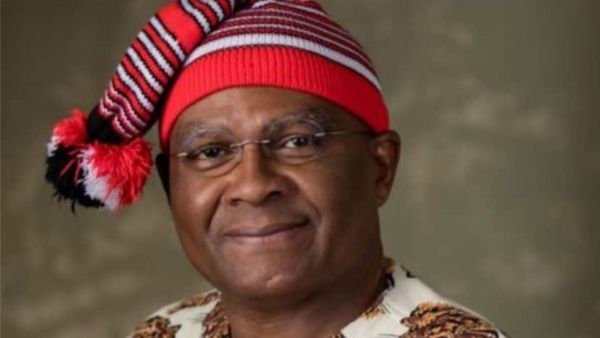 Former Enugu state governor, Sen. Chimaroke Nnamani, has described the presidential candidate of the All Progressive Congress (APC),  Asiwaju Ahmed Tinubu, as a transformational mentor as opposed to a godfather.

Nnamani who inferred that he finds it difficult to stop talking about his former colleague, noted that Tinubu’s unique mentoring style especially during his time as governor of Lagos State from 1999- 2007, was largely responsible for the transformation the state has witnessed ever since.

The Ex-Enugu State Governor who currently represents Enugu State in the Senate, on the platform of the Peoples Democratic Party, said this in a statement he made public, in Abuja, on Wednesday.

He described  Tinubu  as a great mentor who has consistency guided numerous mentees from various states, from political boyhood to political adulthood in his capacity as a political mentor.

Nnamani noted that Tinubu has repeatedly proven himself to be a professional politician and the greatest political leader and mentor; who built the necessary bridges, paid his dues, and nurtured political heavyweights.

“A successful leader, according to Thomas Paine, is one who understands when to take the initiative, follow others  and step aside. Successful strategic plans for the present and future are created by competent leaders who build a shared vision for the future, they discuss how to get what is required while also taking into account what is desired.

“A competent leader develops support for their plans in order to involve people and groups in the decision-making and policy-enactment processes.

“Similar to how different organizations require different kinds of leaders tailored to their needs, local, state, and federal governments require political leaders who can translate divergent viewpoints and conflicting interests into laws and practices that to advance equality and opportunity for all.

“People are believed to follow a leader who will take them where they want to go, but a competent leader will also take them to where they should go. “

Nnamani further said, “I can’t help but feel that when Tinubu  and his Transition Working Group began what will be remembered as Nigeria’s largest political reform, which elevated Lagos State to one of the biggest economic centers in Africa, the majority of residents of Lagos State did not envision the city as it is today after living through three decades of military rule, during which they witnessed first hand a crumbling health system, collapsing school buildings, poor social services, and the rest.

“The city-boy substantially enhanced the lives of individuals who reside in Lagos State with his visionary reforms in the health, school, justice, works, and infrastructure sectors, which we have reviewed in the past weeks.

“Tinubu has guided numerous mentees from various states from political boyhood to political adulthood in his capacity as a political mentor.

“ A trait transformational leaders like Tinubu and the class of 1999 governors have. Tinubu mentees have gone on to hold various leadership positions in Nigeria.

“But we cannot discuss some of his mentees who he has been  nurtured from political boyhood to adulthood without mentioning our very own Anambra Son, Ben Akabueze, whom Tinubu influenced his  appointment as the commissioner for economic planning and budget in Lagos state after seeing his achievements as the CEO of NAL Bank Plc, (now Sterling Bank Plc).

“Ben Akabueze, a well-known chartered accountant through Tinubu rose through the ranks to become the Director General of the Federal Republic of Nigeria’s Budget Office.

“Similarly, Babatunde Raji Fashola, SAN, who was Tinubu’s chief of staff, before serving as Lagos State governor, is currently the Minister for Works and Housing, while the current governor of Lagos State  Babajide Sanwo-Olu, served as Tinubu’s commissioner for commerce.

“Tinubu’s first Chief of Staff and Commissioner of Lagos state then, Alhaji Lai Mohammed from Kwara state is currently serving as Minister for Information and Culture.

“While The Right Honorable Femi Gbajabiamila, Current Speaker of the House of Representatives, was first elected to the House in 2003 courtesy of Tinubu.

He explained that while leaders in comfortable conditions offer an even easier life whether they can provide it or not, revolutionary situations like the fight for Nigeria’s democracy prior to 1999 forged exceptional leaders like Tinubu and many others who demand great work ethics, confidence and ‘can do spirit’ .

Nnamani equally noted that because  of Tinubu’s mentoring philosophy and motivation to finding the best brains from wherever to complete the required job, Lagos State is what it is today.

He said, “In today’s political sphere, our inability to distinguish between confidence and competence, our attraction to charismatic people, and our inability to withstand the allure of narcissistic people have led several nations to elect individuals with no background in politics to the highest office in their various countries, thereby turning a bad situation  worse.”

Nnamani opined that Nigeria’s current dispensation calls for ready and experienced hands like Tinubu and  not beginners  to lead the nation to greater heights.