West Ham United will look to make it four Premier League wins on the bounce when they host Leeds United at the London Stadium on Sunday.

The Hammers have exceeded expectations so far this season and find themselves fourth in the table, ahead of the likes of Manchester United, Arsenal and Tottenham Hotspur.
They enjoyed a comfortable 2-0 victory over relegation-threatened Norwich City in midweek, thanks to a brace from Jarrod Bowen.

Having dumped Leeds United out of the FA Cup third round last weekend and in a good run of form, David Moyes and his side will be confident ahead of Sunday’s fixture.

Tomas Soucek and Mark Noble missed the game against Norwich due to illness and injury respectively. Both have an outside chance to play against Leeds United.

Ryan Fredericks is also out for an unspecified reason, while Said Benrahma is away for the AFCON.

Lukasz Fabianski kept a clean sheet against Norwich City and will hope for another one against Leeds United on Sunday. He should keep his place in the West Ham United lineup.

With Angelo Ogbonna and Kurt Zouma out injured, Craig Dawson and Issa Diop have deputised well but there remains a lot of room for improvement. The centre-back duo will need to be at their best to keep the Leeds United attack at bay on Sunday. 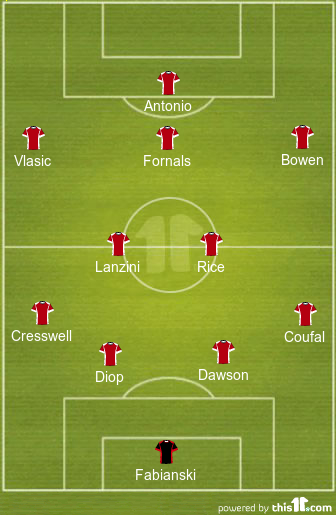 Full-backs Vladimir Coufal and Aaron Cresswell will look to exploit spaces in wide areas and cause the Whites’ backline problems.

If either Tomas Soucek or Mark Noble don’t recover in time, Moyes is likely to go with the central midfield pairing of Declan Rice and Manuel Lanzini.

Rice and Lanzini started in the engine room against Norwich, with the former controlling the game and allowing the latter to join attacks as much as he can. However, against Leeds, they will have to be more compact and disciplined in midfield.

Pablo Fornals is the player that links the midfield with attack, making him such a crucial cog in David Moyes’ system. The Spaniard is a certainty to start in his preferred No.10 role in the West Ham United lineup.

Jarrod Bowen, one of the Hammers’ best players this season, will start on the right and will aim to produce another match-winning performance as he did against Norwich City.

Nikola Vlasic is expected to start on the left flank, with Michail Antonio tasked to lead the West Ham attack again.

Andriy Yarmolenko and Alex Kral will be on the bench providing options for Moyes to bring on in the later stages of the game.

[OPINION] ‘I Want to Be a Party Delegate’ - Olusegun Adeniyi

Dele Momodu: I can’t compete financially with Wike or Atiku — but I have my strategy

Why I dumped PDP, withdrew from Presidential race – Peter Obi

Colleges of Education lecturers give 21-day strike notice to FG

17 Coalition Ask Peter Obi To Dump PDP For Another Party

This is what divorce looks like, Korra Obidi laments

Okorocha to remain in EFCC custody till May 30

Lagos Pupil Vomits, Dies After Being Flogged By Teacher Over Homework

Why I lost PDP primary in Kogi - Dino Melaye

Why we arrested Rochas Okorocha, EFCC opens up

120 hours after, FAAN fails to uncover identity of mangled body

Presidency: All eyes on Buhari as APC weighs options