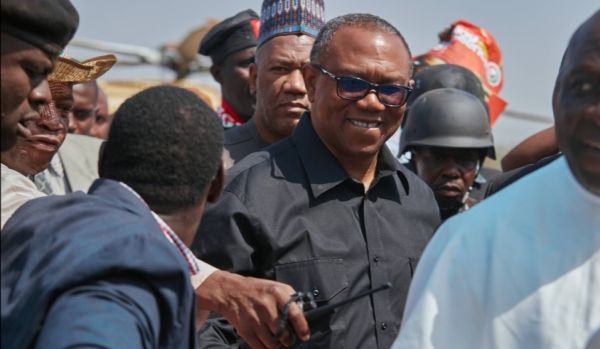 A member of the All Progressives Congress (APC) Board of Trustees (BoT) and the national caucus member from Abia State, Ochiagha Benjamin Apugo, has dumped the presidential candidate of his party, Asiwaju Bola Ahmed Tinubu.

In a statement to journalists in Abuja on Sunday, the elder statesman declared his support for the presidential candidate of the Labour Party (LP), Peter Obi, and the party’s governorship candidate, Alex Otti, in the forthcoming general election.

While distancing himself from the governorship candidate of the APC in Abia State, Ikechi Emenike, Apugo said he would be backing individuals with a proven track record rather than any political party in next month’s general election.

He disclosed that he told Emenike would lose the forthcoming election both at the state and national level during a courtesy visit to his residence.

He said: “Emenike and his team paid me a courtesy visit as a chieftain of the party to inform me of his governorship ambition as well as the proposed visit of the APC presidential candidate, Bola Ahmed Tinubu, to Umuahia, Abia State.

“I emphatically told Emenike that the APC would lose both the Abia governorship and presidential elections, and restated my uncompromising support for Otti and Obi.”

“APC will fail woefully in Abia State. PDP is already dead. I am supporting Otti. I didn’t endorse him (Emenike). I told him that APC will not win because there is nothing to show APC people. So, forget about endorsement,” he added.

On why he is backing Obi or Tinubu, the APC noted that he has always associated with people of high moral standing and integrity, hence his support for Otti and the Labour Party presidential candidate.

Apugo maintained that both the APC and the PDP have failed Abians and should be roundly rejected.

He insisted that Otti was the only outstanding personality in the Abia governorship race with proven capacity and passion to develop the state. He added that he was not engaging in anti-party activities.

Apugo said, ”What is anti-party? What I am telling you is the correct thing. They haven’t done anything here. I am saying it with annoyance. With the position that I held in APC, nothing. I am not talking about myself. I have not gotten even one contract from them. No employment for one single person since eight years.

“So, what are you talking about anti-party? They know that what I am talking is the correct thing. They have not done anything to my people here. They didn’t do one single thing here in my home town which is the capital of Abia State. No federal presence.“