One of the housemates in the most popular Africa’s reality television show, #BBNaijaS7 is a 26-year-old England-based Segun Daniel Olusemo popularly known as Shegzz.

Shegzz is also an actor and professional footballer among the housemates in the #BBNaijaS7 themed ‘Level Up’ which began on Saturday.

He asserted that that he thinks it is important to settle down with a partner one genuinely connects with than going for the vibes.

According to #BBNaija’s Shegzz, “I think it’s important to settle down with someone you genuinely connect with and not just for vibes.”

Revealing his profile, after sustaining an injury last year, he started acting again and recently scored a role in a production directed by Tola Odunsi. 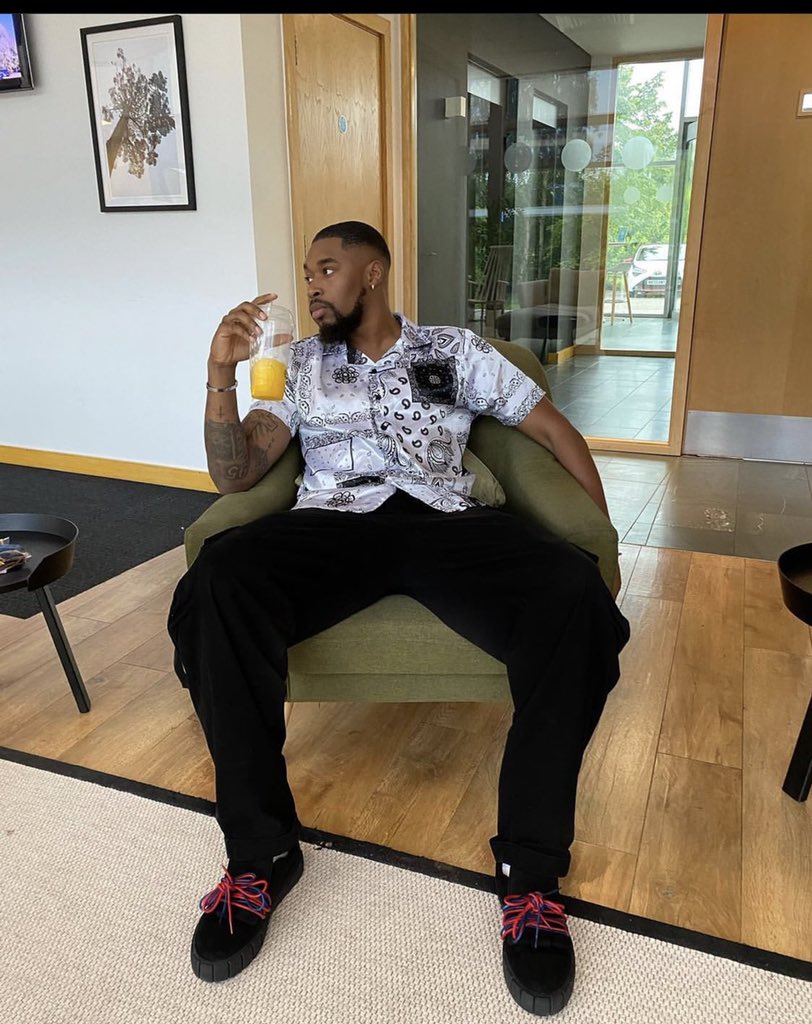 Shegzz said he is a hard worker as well as a smart worker, and believes it is important to be both.
He also revealed that it is a good thing to be a talkative when needed, but also a good listener, as he considers himself down to earth, relatable, and ambitious.

Shegzz is currently single, loves relationships, but believes it is pertinent to find the right person. “I think it’s important to settle down with someone you genuinely connect with and not just for vibes,” he said.

Speaking on his participation on #BBNaija, Sheggz believes he has a lot of skills to show the world.

“Nigerians have talent, we have swag, we have vibes, we’re smart, we’re ambitious and to be honest, we’re all over the world smashing goals and achieving,” said Shegzz.

Chichi and Bella, BBNaija season seven housemates, have clashed over a dance contest put together by their colleagues in the house.

The housemates had organised a dance session as part of efforts to further strengthen their bond while dividing themselves into two teams.

Everyone was asked to pick their preferred team for the exercise.

Drama, however, started when Chichi, who was not present during the selection process, argued that one team had more dancers.

The stripper had demanded that the teams should be reshuffled in order to achieve a balance.

But Bella countered the idea and insisted that the teams should not be reshuffled.

Rankled by the objection, Chichi confronted her and asked why she was “shouting like a market woman”.

The situation escalated as both women engaged in a heated war of words with Bella referring to Chichi as “stupid”.

Chichi also fired back, warning “before you try me, try crack.”

The duo were among the housemates unveiled on Sunday.

This makes it the first clash so far in the seventh edition of the show which started on Saturday.

The winner of this year’s edition, titled ‘Level Up’, will go home with a grand prize of 100 million — the highest ever since the inception of BBNaija.

The reality star said this in an interview with  with Nigerian Journalist Chude Jideonwo, Boma, who has being under heavy backlash for his illicit affair with his married colleague, said he has kissed and romanced people’s wives and girlfriends in movies.

The self acclaimed “okra President” said, “I've been on set and I've done the same actions or even worse than that. Not sex because I didn't have sex with Tega, but I've kissed, I've romanced people, I've played romantic scenes with people's wives and people's girlfriends or whoever they were. I'm not the casting director. I didn't choose who to be my partner.

Bro I won't lie to you it was a show. That's someone that asked me when I left the show without me even knowing what was going on, we are all going back to our families. I'm going back to my girl. Oh yes, I have a girlfriend and nobody still knows, how private can one be?”

During the first launch of the reality show on Sunday, the host, Ebuka Obi-Uchendu announced that there will be twist and turns in the BBNaija 2021 Shine Ya Eye Edition.

The first twist was announced on Sunday during the second launch of the reality show, when the host announced to housemates that two among the twenty-two housemates are wild cards.

The responsibility of the housemates is to figure out who the fake housemates are in order to be evicted.

Big brother revealed the wild cards to viewers during the diary session on Thursday by 3:00pm, that the  ‘wildcards’ in Biggie's house are Maria and Pere.

Wildcards are fake housemates to go about their day in the house without the housemates having a clue and  to provide entertainment and serve as pawns of Big Brother in the House.

BBNaija 2021: I miss the feeling of being in love and everything that comes with it - Jackie B

One of the highlights of Day four in the Big Brother Naija Shine Ya Eye house was the heartbreak discussions among housemates.

In a small circle, Nini, Pere, Arin, Boma and Beatrice, talked about their first heartbreak and Pere revealed that he had heartbreak three times.

when Jackie B and Pere sat down to have a conversation, the two spoke about their past relationships but Jackie seemed to have taken over a greater share of the conversation.

She revealed to Pere and that she has been heartbroken before, so she hasn’t really been in love again with all her heart. However, she has been in several relationships but her feelings for all those relationships haven’t been as intense as it used to be before someone took her for a fool.

She added that as of now, she is willing and hoping to fall in love all over again no matter the outcome. Stating that she misses the feeling of being in love and everything that comes with it.

The duo, on Friday night, shared videos on their Instagram stories with the tag “We are good”.

Recall that the two ex-housemates had altercations during the ‘lockdown’ edition which led to Erica’s disqualification.

This is the first time both former BBNaija candidates will be seen smiling at each other since their infamous feud during the Lockdown season in 2020.

Recall that Erica was infuriated on the heels of the question Ebuka asked Laycon on some of the private discussions he’s had with his friends about Erica.

Their feud did not end after the show ended. It was still obvious during their reunion show, when Erica said she doesn’t care about Laycon, but now the duo have now reconciled their differences.

The video of them spotted hanging out together on Friday has since gone viral on all social media platforms, generating reactions from their fans and haters alike.

The different episodes of the Big Brother Naija Reunion, Lockdown edition have given viewers different experiences among fellow housemates.

We have seen the love triangle, octagon, square, circle between Wathoni, Prince, Tolani Baj and Dorathy.

We’ve seen Dorathy, Brighto and Wathoni, then we have Ka3na and Praise.

Why is Wathoni all over the place; jumping from one love circle to another?

The day 5 episode featured Kiddwaya’s playful moments with Wathoni and Nengi in the house, and also kaisha and Neo’s scores to settle.

The underlining thing in tonight’s episode, was not just about the triangles; it was about every house mate being served.

Before Kiddwaya started anything in the house with Erica, there was Wathoni and Nengi in the picture.

KIddwaya is literally in every woman’s corner in the house, either seriously or playfully.

However, Erica was the only person in the house he usually gives serious attention. But when it comes to other women, he was always flirtatious.

Before the Truth or Dare game in the house, Kiddwaya has already being flirting with Wathoni.

Kidwaya made flirtatious statement about Wathoni’s body in the BBN house, how she looks like a model and he could literally keep Wathoni and paint her naked in his house and then spray her with money.

Conversely, Kid said to Nengi that he would buy her land, he will buy her diamonds…

In one of the Saturday’s night party in the house when Nengi and Kiddwaya was seen in the bathroom and Ozo and Neo badged in on them; the scene triggered a lot of speculations to Neo, Ozo and the viewers.

Some said that Kid and Nengi had sex in the bathroom, another said Nengi wanted Kid to help her out with her zip, but when the show host fielded questions to Nengi and Kiddwaya about the incident in bathroom; they both claimed amnesia.

According to Wathoni, “Kid is a Community Boy.”

“I feel like he was trying to be a playboy or a badguy,” she explains.

Kiddwaya saw Wathoni’s choice of words as her own opinion of him.

BBN Reunion Update: I have men in my palms - Tolani Baj

Nigerian media personality and content creator, Tolani Baj declared that she has men in her palms.

The ex-house mate of the Big Brothers Naija Lockdown season said this during a heated argument during the day 3 of the reunion show about pyramids, fights and friendship while in the BB Naija house.

What first started as a Prince and Nengi ship led to an octagon-shaped entanglement involving Prince, Nengi, Dorathy, Tolanibaj, Neo and Vee. Tolanibaj and Vee also address their hollow friendship in this episode.

She said, “With Prince, I liked him at a time, I felt like he was attractive, we had a good conversation so we had a conversation in the garden and he was like he was ready to be done with the triangle what not and it’s me that he wants and I remember letting him know that I didn’t believe him at a time because Nengi had rejected him that’s why he came to me and I said what I said.

“I have said multiple times that I am not a second option but he tried to convince me, gaslight me like it’s you that I want and honestly, I regret getting into that entanglement, because it has cause nothing but embarrassment; from social media, from his family members, and embarrassment online.

“Prince was mostly saying that we are not going to be friends that this relationship must work and they are trying to portray me as being desperate.

“I don’t struggle to get men’s attention; I have men in my palms.

“The agenda of Tolani Baj being desperate please dead it, because I know who I am.”