In a 2018 interview, Peter Obi said he invested $20 million in International Breweries on behalf of Anambra state as a governor.

Obi’s claim was in response to questions on economic development, Anambra politics and his presidential ambition.

“… Anambra state is the single-highest shareholder in that facility. I invested in it, over $20 million,” Obi had said.

“It is worth almost $100 [million] today. That’s what government should do.”

TheCable had previously fact-checked some of the claims.

Chukwuma Soludo, governor of Anambra, also debunked a recent statement ascribed to him regarding the investment.

International Breweries (IB) Plc is a subsidiary of the world’s largest brewer, Anheuser-Busch InBev (AB InBev) — a multinational drink and brewing giant based in Leuven, Belgium.

In its 2021 audited financial statement, the company said it holds 43 percent economic interest in International Breweries Plc, a publicly listed company in Nigeria.

According to a report by The Nation, AB InBev merged its Nigerian operations under a single corporate entity in 2017. It had three indirect Nigerian subsidiaries — International Breweries Plc, Intafact Beverages Limited and Pabod Breweries Limited. SABMiller Nigeria Holdings BV — another subsidiary of AB InBev — was also a major stakeholder in Intafact and Pabod.

In a statement made available to TheCable on Tuesday, Ifeatu Onejeme, Anambra’s commissioner of finance, confirmed that Peter Obi’s administration invested the sum of N1,955,535,247.00 (an equivalent of approximately $12,616,356.43 at the then average CBN exchange rate of N155.00/$1) in Intafact Beverages Limited, a green-field brewery set up in Onitsha by SABMiller Breweries of South Africa in 2012. 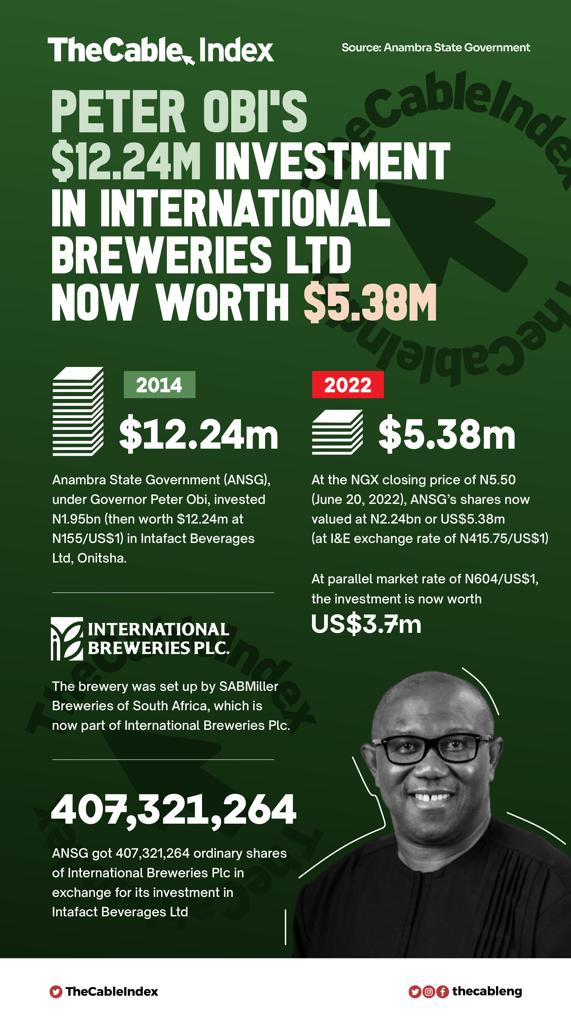 Checks by TheCable showed that International Breweries has two major shareholders with stakes above 5 percent. The highest shareholder is AB INBEV Nigeria Holdings BV with 72.03 percent followed by Brauhaase International Management GMBH with 8.85 percent. These details are contained in the company’s financial report dated March 2022.

Further checks showed that these individuals/ special purpose vehicles (a subsidiary company that is formed to undertake a specific business purpose) are part of the company’s minority stakeholders. They include:

According to its financial records, International Breweries Plc returned negative bottom-line figures in the last three years. These are mainly due to high operational costs, FX fluctuations and supply chain constraints.

Katsina Shuts Over 60 Clinics Over Insecurity

After being found having an affair, cheating wife forced to carry her husband through the streets.

EPL: He’s better – Pennant tells Chelsea who to sign instead of Sterling