Portugal was too much to handle - says Switzerland’s coach 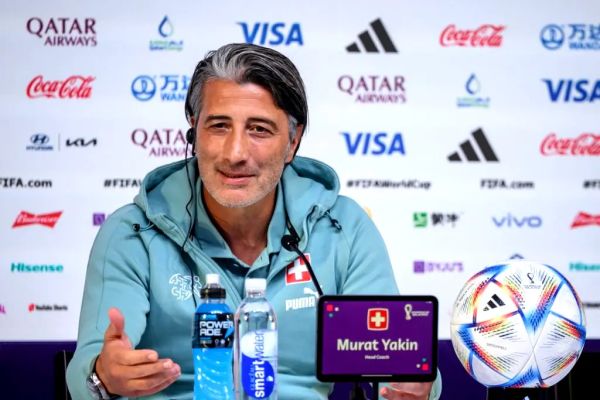 Switzerland’s coach Murat Yakin attends a press conference in Doha on December 5, 2022, on the eve of the Qatar 2022 World Cup Round of 16 football match between Portugal and Switzerland. (Photo by Fabrice COFFRINI / AFP)

Switzerland coach Murat Yakin said his team had simply been beaten by a better side after Tuesday’s 6-1 hammering at the hands of Portugal in the World Cup last 16.

“Our opponent today was better, faster, more offensive and our plan didn’t work out and we have to accept that,” Yakin told a news conference.

“We had great plans, we wanted to make history, we showed great football in the group stage and now we faced a opponent, a better opponent, but we can still be proud of what we have achieved here.

“We are seeing that the great teams are advancing here, some were able to rest players and then they had freshness. We were lacking that freshness,” he said.

The Switzerland coach said that defender Fabian Schar, who had to be replaced at half-time had been struggling with his breath.

Asked about his future Yakin said it was not time for over-reactions.

“We lost a game today and that doesn’t mean we have to be too pessmistic and criticise everything,” he said.

“We showed great spirit and had great plans today, we have to just accept that the opponent was better and had more strength and we have to put that behind us and look forward,” he added.