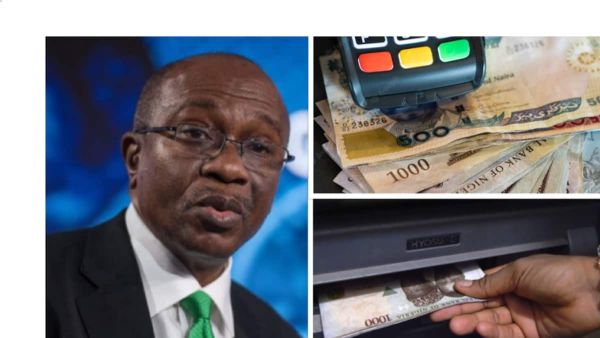 Fearing the consequences of the Central Bank of Nigeria’s cash withdrawal limit of N100,000 per week on their lifestyle and campaign, some politicians in the country have raised objections to the policy, with the Senate resolving to critically interrogate the policy next week.

Opposition to the planned N100, 000 withdrawal limit per person per week came through an attempted motion by Senator Philip Aduda (PDP FCT) during Senate plenary yesterday.

Senator Aduda, in the aborted motion, sought for debate from all senators on the planned policy before the President of the Senate, Ahmad Lawan intercepted him, saying it was too early to debate the policy.

However, Lawan in stopping him said: “As good as the cashless policy may be, it shouldn’t be jumped at, at once. The way CBN is going about the policy, many Nigerians would be cut off and that won’t be accepted.

“Motion on the policy will be thoroughly debated in Senate on Tuesday next week after adequate information has been gotten on it.

“Before Tuesday next week, our committee on Banking, Insurance and other Financial Institutions mandated to screen the re-appointed deputy governors of Central Bank should focus its questions on the planned policy.

“The CBN deputy governors must be thoroughly drilled on the policy after which extensive debate on it will be made by senators on Tuesday next week”, he said.

The Senate has also threatened 100 federal government-owned agencies with zero budget allocation in 2023 for not honouring invitations from its Committee on Public Accounts for explanations on service-wide vote expenditure from 2017 to 2021.

This development is sequel to complaints lodged against them by the chairman, Senate Committee on Public Accounts, Mathew Urhoghide (PDP, Edo South).

Urhoghide had, through Orders 42 and 95 of the Senate Standing Rules, complained about the alleged recalcitrance of heads of the affected agencies to honour invitations sent to them by his committee for appearance before it for explanations on service-wide vote given to them by the Presidency, totalling N1.9trillion.

Service-wide vote, according to him, is extra budgetary spending made to fill shortfalls in capital and recurrent expenditure which are not audited by the auditor-general of the federation (AuGF) and not known to various standing committees of the National Assembly.

Urhoghide, who hinged his complaints on provisions of sections 62, 88 and 89 of the 1999 Constitution (as amended), said heads of the affected agencies failed to honour several invitations sent to them to make required explanations on service-wide vote spending from 2017 to 2021.

He said the affected agencies were also those who refused to appear before the committee to answer queries slammed on them by the AuGF over alleged financial infractions.

“Mr President, heads of agencies totalling about 100, indicted in various reports forwarded to the Public Accounts Committee by the Office of Accountant General of the Federation on disbursements and spending of Service-wide Vote from 2017 to 2021, in line with provisions of sections 62, 88 and 89 of the 1999 Constitution, have repeatedly failed to appear before us.

“This, to us, is against the constitution and policy of accountability and transparency of the federal government.

“I crave your indulgence that we invite through your order, either by way of warrant of arrest or anything, so that these agencies can come, that we can complete our report and submit to this Senate,” he said.

Peeved by the submission, Senate President Ahmad Lawan requested the list of the affected agencies, read them out to all Senators and ordered that they appear before the committee within one week or risk zero budget allocation capital expenditure in 2023.

“Your point of order is sustained fully, completely, and totally sustained; you are right to bring to the plenary your grievances. Reading this list at plenary gives the agencies opportunity to now know if they were not aware before – for those that may claim ignorance – and I am taking the opportunity here to advise that in the next one week if the name of any agency is here, that agency should reach the committee on public account of the Senate to sort out when the agency would appear before the committee.

“If there is no communication whatsoever and no cogent and verifiable reason is given, we will slash the budget of the agencies as far as the capital component is concerned.

“Heads of the affected agencies must take this very seriously because any serving public officer must be ready to render account on public funds and if not ready to do so, should quit since nobody should be above the law “, he said.

Other affected agencies aside the ones earlier mentioned are: Office Of the Accountant General of the Federation, Federal Ministry of Interior, Budget Office of the Federation, Nigeria Bulk Electricity Trading Plc , Ministry of Foreign Affairs, National Emergency Management Agency , National Commission for Refugees, Migrants and Internally Displaced Persons, Nigeria Security and Civil Defence Corps, Ministry of Defence and Office of the Special Assistant to the President on Niger Delta Affair s.

Meanwhile, the Conference of Nigeria Political Parties (CNPP) has said that critics of the new cash withdrawal limits imposed by the CBN are missing the point on the key gains of the policy, especially ahead of the 2023 general election.

In a statement signed by its secretary general, Chief Willy Ezugwu, the CNPP stated that Nigerians are suffering today because of bad governance and every sacrifice towards getting the right leadership into offices from 2023 is worth it.

According to the CNPP, any process that will minimise the domination of the Nigerian political space by moneybags and corrupt politicians is worth whatever sacrifices by the ordinary citizens, who bear the brunt of bad governance the most.

“Secondly, information available in public domain shows how several millions, if not billions, of naira notes got mutilated and became of no use where the country’s thieving leaders stashed the cash, thereby denying the economy, especially the banks, the liquidity for productive enterprise,” it said.

The CNPP added that poor fiscal policies in the country over the years resulted from having the wrong persons in public offices due to electoral processes that abhorred level playing ground.

“Therefore, the CBN should be commended, rather than criticised, for the fresh cash withdrawal limits.

Mr. Godwin Emefiele as the CBN governor is unarguably the hero of Nigerian democracy and champion of good governance by virtue of the twin policies of redesigning of the naira notes and the reviewed cash withdrawal limits, with a perfect timing of the dates for implementation,” it stated.

The CNPP urged the President Muhammadu Buhari administration, and by extension, all security agencies and anti-graft bodies to act swiftly to ensure that no politician or highly placed individual influences banks to circumvent the cash withdrawal policy.

“We also call on all well-meaning Nigerians to support the CBN policy on cash control as part of efforts to secure the future of the country, particularly ahead of the 2023 general elections,” the CNPP stated.