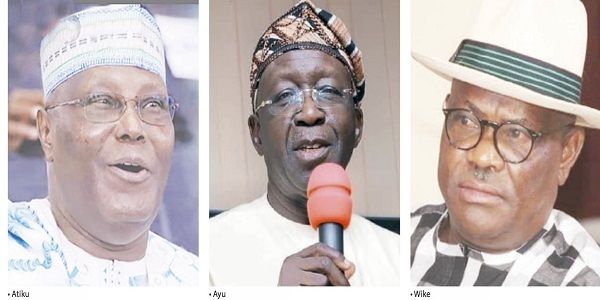 The party called an emergency meeting after Wike and his loyalists withdrew from the party’s presidential campaign council.

However, the decision on Wike’s camp will be made public following the PDP leadership meeting today.

Following a meeting at Wike’s private residence in Port Harcourt, Rivers State, on Wednesday morning, the Wike camp announced their intention not to withdraw from the campaign council, which was scheduled for inauguration next Wednesday.

They insisted that Chairman, Iyorchia Ayu must resign from office and his position zoned to South for balance, justice, and equity.

In the sequel to the development, the PDP leadership went into a marathon meeting to determine what decision to take on the actions of the Wike camp.

“As a party, we need to take a firm position to rebuild and rebrand our party. We have been in a marathon meeting since morning (Wednesday). But one thing is clear, no one has rejected our presidential candidate; that is very important. The meeting will continue tomorrow (today) and after the meeting, we will make our position clear.”

Meanwhile, the PDP’s Presidential candidate, Atiku Abubakar on Wednesday told Governor Nyesom Wike and his group that Iyorchia Ayu will not resign.

Atiku, in a statement, said: “On the calls for the resignation or removal from office of our national chairman, however, I must reiterate what I have said severally in public and in private; the decision for Dr. Iyorchia Ayu to resign from office is personal to Dr. Ayu and, neither I nor anyone else can make that decision for him.”

Atiku said he is a committed democrat and firm believer in the rule of law and democratic tenets and that everything must be done in line with the party’s constitution.

“As to the calls for the removal of Dr. Ayu from office, however, I will state that, as a committed democrat and firm believer in the rule of law and democratic tenets, and our party being one set up, organised and regulated by law and our constitution, it is my absolute belief that every thing that we do in our party must be done in accordance with, and conformity to, the law and our constitution,” he said.

Atiku insisted that if Ayu is removed from office, it must be done in accordance with the laws of the party.

In his words: “If Dr. Ayu is to be removed from office, it must be done in accordance with the laws that set out the basis for such removal.

“In any event, you will all recall that the very body that is empowered by law to initiate this removal from office, has already passed a vote of confidence in him.”

A member of the PDP National Working Committee, Timothy Osadolor, also carpeted Wike for holding on to his grudges for too long.

He warned that his ego might be his undoing.

Osadolor said the call for Ayu’s sacking was a plot to sabotage the party’s chances in the 2023 elections.

He stated, “The situation is being taken too far; Wike is crying too much for a mature person. I don’t know why Wike with all the experiences he had achieved in life cannot get over the loss of the primary. Ego is good but ego to some candidates can lead to destruction.’’

The NWC member further stated, “Why did you want to bring down the house because of your interest? Calling for the sacking of Iyorchia Ayu and supporters at his whims is not possible which he knows is not possible at this time and is not even what he wants.

“I believe calling for the sacking of Iyorchia Ayu is to sabotage the general elections and I believe he is already manifesting in his actions.”