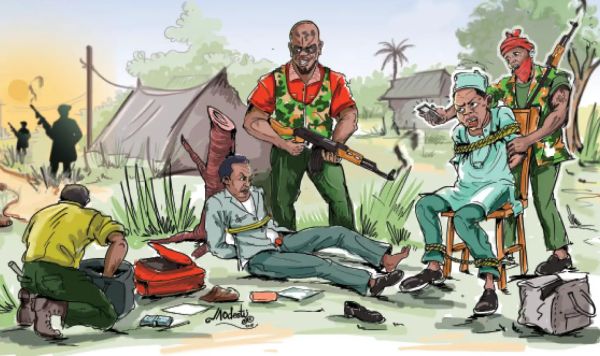 Gunmen who kidnapped three persons in Fulani settlements near Iwo town, Osun State, have reportedly told families of the victims to pay ransom in dollars.

WITHIN NIGERIA had reported that gunmen kidnapped the victims after invading the community at about 10 pm last Friday.

According to PUNCH, one of the victims, Adams Ojonla, has regained his freedom after the abductors ran into some hunters around the Papa area of Iwo on Monday.

During the encounter at Papa, the abductors were said to have engaged the hunters in a gun battle, during which Ojonla was abandoned.

PUNCH reported that the abductors told the families of the remaining victims during negotiation to pay the ransom in dollars.

A source said, “They contacted the families of those abducted late on Sunday. They initially asked for N5m for each one of them. But today (Monday), they reduced the sum to N4m for each of the two people in their custody.

“Police operatives and hunters are on the trail of the perpetrators. One person has been rescued, but two are still being held.”

The state police spokesperson, Yemisi Opalola, said, “One person has been rescued. But a search-and-rescue operation is still on to free others.”