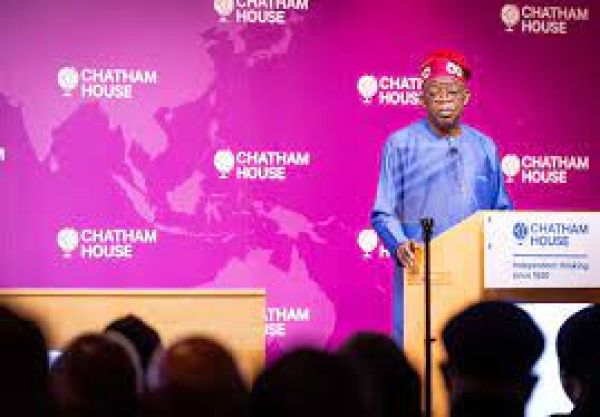 Signs that the presidential candidate of the All Progressives Congress (APC), Bola Ahmed Tinubu, will run a government by proxy if elected, emerged at his outing at Chatham House in London. Tinubu, who has made a tradition of avoiding public speaking events in the run-up to the February 2023 elections, jettisoned the Arise Television townhall meeting organised for the major presidential contenders on Sunday, December 4, 2022. It was the latest in Tinubu’s non-appearance at similar engagements since he won the presidential ticket of his party last June.

Last August, Tinubu was conspicuously absent at the annual conference of the Nigerian Bar Association (NBA). Presidential candidate of the Peoples’ Democratic Party (PDP), Atiku Abubakar, and the candidate of the Labour Party (LP), Peter Obi, honoured the invite at the conference held in Lagos. Tinubu’s running mate, Kashim Shettima, stood in for him. In September, Tinubu was again absent when presidential candidates of all the political parties endorsed the 2023 election peace pact. The National Peace Committee (NPC), organisers of the peace pact, is chaired by Abdulsalam Abubakar, a former military head of state. Tinubu was again represented at the event by his running mate, Shettima, at a process that the PDP presidential candidate, Atiku, also attended in person. Obi, the candidate of the Labour Party (LP) and Rabiu Musa Kwankwaso of the New Nigeria Peoples’ Party (NNPP), were also present.

In what has become his trademark, Tinubu shunned an earlier townhall meeting also convened by Arise Television in early November, where Atiku was represented by Arthur Ifeanyi Okowa, his running mate. On the eve of yesterday’s second edition of the Arise Television, Tinubu jetted out to London, supposedly to headline an engagement on Nigeria’s political process. This was by way of addressing the British Royal Institute. He was supposed to have focused on the 2023 general elections, with specific regards to national security, economic and foreign policy imperatives. Director, media and publicity of the APC-Tinubu/Shettima Campaign Organisation, Bayo Onanuga, had previously said his principal “would not be blackmailed into attending the event”.

Atiku, Kwankwaso and Obi dutifully attended the interview programme, which was simultaneously transmitted to the world from both the Lagos and Abuja studios of the organisers, anchored by Charles Aniagolu and Adesuwa Omoruan. The attendees addressed issues related to poverty alleviation and the holistic re-engineering of critical education, healthcare and human capital development. In what was a temperate and convivial ambience, Atiku who is rigorously grounded in both the public and private sectors promised to remove red-tapism and block wastage in government if elected. “Overheads” and “recurrent expenditures” which are often blurry and opaque, constitute major drainages to public resources, emasculating appropriations for actual socio-economic growth.

The “question and answer” session which followed Tinubu’s address, however, visibly exposed Tinubu’s suspect capacity in one-on-one dialogue. In a visibly striking pattern which amplified this possibility, Tinubu severally called up members of his entourage to answer the questions posed to him. He had on his delegation the speaker of the House of Representatives, Femi Gbajabiamila; Kaduna state governor, Nasir el-Rufai and his Jigawa and Cross River counterparts, Abubakar Badaru, and Ben Ayade. Former Ekiti state chief executive, Kayode Fayemi, was also present.

There were also Dele Alake, a seasoned media practitioner and Wale Edun, a top player in the economic and financial sector. Both served as commissioners in Tinubu’s state executive council, when he was governor of Lagos state between 1999 and 2007. Tinubu variously called out El Rufai, Ayade, Alake and Edun to answer questions directed at him. The outsourcing of the questions was a watershed in political engagements anywhere. The world has taken due cognisance of our leadership recruitment prototype, at the topmost echelons in Nigeria.

Back in 2015, Buhari, despite his well-established communicative deficiencies, never reassigned questions directed at him. How he has outsourced authority during his term in office will constitute another discussion. It would have indeed been more dignifying for Tinubu to have attended the Arise Television townhall meeting in Lagos. Any of the governors who travelled with him would have done a better job of the delivery of the address which was well written by the way. Tinubu and his party owe Nigeria and the international community profound apologies. The much-publicised Chatham House appearance was a massive disaster.

Tinubu’s appearances on the soapbox across the country since the flag-off of campaigns have been characterised by concerning verbal gaffes and wobbly coordination. When he is not calling Delta state “Niger Delta state,” he is offering prayers for the success of the main opposition party, PDP. While on a recent campaign visit to Bayelsa state, the APC flagbearer struggled to pronounce the words “recreate” and “technological”. Out there at the *Chatham* outing, even when he had the dais all to himself, Tinubu stuttered in instances, including having difficulties with an expression as straightforward as “co-contestants”. These serial blunderings have inspired several social media skits and videos highlighting the worrying cognitive challenges of the APC candidate.

The obvious plan of the APC is to paper up, cover up in glass, gloss and foist on Nigerians, a president with such worrying vitals. Or else, why the Tom and Jerry roulette about a man who intends to superintend over the lives and affairs of Africa’s most populous country remain eternally shrouded in mystery? This is even though Nigeria is yet to recover from the long years of the locusts of the Muhammadu Buhari catastrophe, which has subsisted since 2015. A man who survives drowning is more circumspect when he sees a large body of water. Nigerians must be circumspect and resist the installation of another “royal president” who will oscillate between the comfy cocoon of the presidential villa and the world-class medical facilities of Europe and America. We cannot go to the Saturday, February 25, 2023 polls blindfolded, the way we did in 2015. We cannot afford another president who will be a serial medical tourist, logging 225 days of our collective life and existence. A very popular Yoruba adage tells us that even as we shed tears, our eyes are not blind to goings on around us.

Tinubu’s managers and handlers owe Nigeria the obligation of allowing us to engage with the man who aspires to make presidential broadcasts to us, post-May 29, 2023. Nigerians must prevail on Tinubu to talk to us, face-to-face like Atiku, his principal challenger, who is ever enthusiastic to reassure Nigerians how we can collectively rebuild our crumbled national edifice. The title of the very incisive book: ‘This House Has Fallen: Nigeria In Crisis’ by the German author, Karl Maeir, cannot be more apposite. Nigeria doesn’t need a masquerade as a leader. We need a tested Atiku Abubakar who can very ably provide full-steam leadership straight out of Eagle Square, Monday, May 29, 2023.