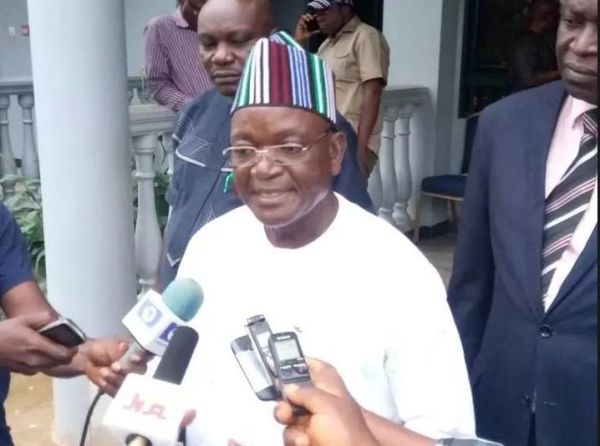 Just when you think you have seen it all in Nigeria’s deepening leadership rot, something worse pops up. Governor Samuel Ortom of Benue State has taken how leadership underdeveloped Nigeria to a new low. Ortom while reveling with the other dissident PDP governors he hosted in Benue over the weekend said he will never vote for a Fulani man to become President of Nigeria.

This is the most unfortunate ethnic profiling to come from a sitting governor in recent times. In case you missed the vituperation in question, his words: “Anybody supporting Atiku in Benue is an enemy of the state. I will never support a Fulani man to become president.…”

Before dealing with the dangers of ethnic profiling by political leaders, a few questions at the heart of the PDP crisis need to be raised. Is Ortom saying that his group is after stopping Atiku from becoming president or forcing Ayu to step down so that South could produce the chairman of the PDP? Hasn’t Ortom outburst revealed the group’s actual intent? Doesn’t it mean that even if Ayu steps down today and the chair moves South, Ortom and his group would still work against Atiku becoming president? Why was Ortom so sure a Fulani would not pick the PDP ticket when he guided the PDP zoning committee to recommend that the PDP presidential ticket be thrown open to the whole country despite the express provision of the party constitution to the contrary? Are the four presidential aspirants who gunned for the PDP ticket from the North, not all Fulani, namely: Atiku Abubakar, Bukola Saraki, Bala Mohammed, and Aminu Tambuwal? Even Hayatu-Deen who stepped down before the PDP primary is also a Fulani. So, what was Ortom thinking then? A marabout had told them the ticket was for Wike?

What Ortom’s careless comment means is that the herdsmen who have engaged in deadly conflict with farmers represent the entire Fulani ethnic group and carry out their nefarious activities with the prompting and approval of the Fulani in Nigeria. This cannot be true and for a governor to tar the entire ethnic group with the same brush is not the stuff statesmen are known for.

National leaders ought to be statesmen. Real leaders are strong men and women who bring sides together and not those who create voids separating the people they lead. Such leadership failure which Ortom just exemplified is what has kept Nigeria on her knees since independence, breeding unprecedented disunity among Nigerians that has peaked today.

Ethnic profiling has ripped Nigeria and some other nations apart. It was the ethnic profiling of Ndigbo in Nigeria following the first military coup that led to Nigeria-Biafra civil war. The Civil War (6 July 1967 – 15 January 1970), war was fought between Nigeria and the Republic of Biafra, which declared its independence from Nigeria in 1967 because its leadership felt its people could no longer coexist with the rest of the country. Immediate causes of the war in 1967 included a military coup, a counter-coup, and anti-Igbo pogroms caused by ethnic profiling of the coup in Northern Nigeria. The profiling rewrote the history to be: A group of Igbo officers formed a conspiracy to overthrow the government of Sir Abubakar Tafawa Balewa to foist Igbo hegemony. This lie has been sustained to this day and has continued to inhibit the progress of the Igbo ethnic group.

Ortom should also remember Rwanda and how that nation walked the rivers of blood that paved and watered the road to Kigali. It was yet another classic case of ethnic profiling. The Rwanda genocide was started by Hutu nationalists in 1994 in the capital of Kigali through reckless ethnic profiling. The genocide it sparked spread throughout the country with shocking speed and brutality, as ordinary citizens were incited by local and Hutu government officials to take up arms against their neighbors.

The genocide was conceived by extremist elements of Rwanda’s majority Hutu population who planned to kill the minority Tutsi population and anyone who opposed those genocidal intentions, spurred on by propaganda from various media outlets.

Is this what Ortom wants for Nigeria with his ethnic profiling?

Ortom and those cheering him should also be told that when the chips are down, the world does not usually care. The UN did not care when Biafrans were being massacred. Two million Biafrans died, and women and children starved to death while the world watched.

And When Rwanda happened; official sources said the UN’s inaction stemmed from its desire not to get involved in a potentially-risky operation for public relations that could damage the prospects for future peace-building operations. Should Nigeria melt down, Ortom and his cohorts should not expect anything different from the world that has abandoned Ukraine to her fate as thousands perish in her ongoing war with Russia.

There is no doubt that the herdsmen-farmers conflict has worsened since 2015 when the APC came to power at the center and Benue has been on the receiving end mostly. Yet, it will still be wrong for a sitting governor to publicly state that the killings are a Fulani ethnic agenda. Atiku Abubakar is not a herdsman and does not own cattle or condone the atrocious actions of the herdsmen.

Ortom knows that there are non-state actors and criminals in all regions of the country, involved in one form of violent conflict or the other. We have Boko Haram terrorists in the North East; Bandit terrorists in the North West; UGM in the South East; OPC in the South West; Niger Delta militancy in the South-South and so on. Yet, nobody is saying he or she would not vote for a presidential candidate from those areas of the country for the reason of the violent conflicts that have taken root there.

It is also important to point out how the poor leadership of the current crop of governors has contributed to the terrible state of the nation and its insecurity. Apart from the extremely poor governance record of Ortom, the governor who has stockpiled the largest salary and pension arrears, Ortom forming the Benue Volunteer Guards, BVG, a security outfit, is yet another aberration.

Any outfit set up to carry out police functions in Nigeria is an affront to the nation’s constitution, which expressly states that there shall be only one Police Force in Nigeria (see Section 214 of the 1999 Constitution). What Ortom and other governors ought to do is come together and push their federal and state legislators to constitutionally create State Police and Community Police through alteration of that section of the Constitution. This is the only way to legally and realistically give the States the power to deal with policing and security challenges through proper recruitment, proper training, and proper arming of such outfits, which cannot happen under the current constitutional arrangement.

But rather than follow this lawful pathway, some governors like Ortom prefer to create amorphous security outfits that they arm and deploy to hound their political opponents thereby creating a worse state of insecurity in their States. Pursuing State Police and Community Police through the constitutional process would have been Ortom’s enduring legacy since he has abysmally failed in the area of governance.

The essence of Ortom’s vituperation should not be lost on anybody. He was loud and clear: Ortom, Wike, and the others are after Atiku, not Ayu, whom they earlier presented as a smokescreen to shield their actual target.