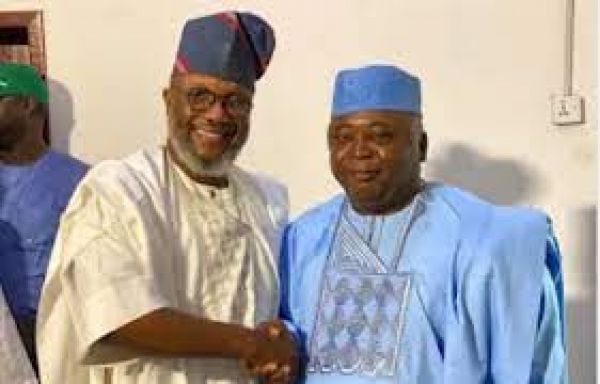 The Ogun State chapter of the opposition Peoples Democratic Party (PDP) is in the news again for the wrong reason. This time, it is about the hoopla surrounding the illegal signing of documents formalising the sharing of public positions between the governorship candidate of the party in the coming 2023 general elections, Hon. Oladipupo Olatunde Adebutu, and his running mate, Hon. AbdulKabir Akinlade.
The deal, which ostensibly depicts desperation for power, has since thrown the conventional and social media platforms into frenzied reactions. Without giving a hoot to the state of the common patrimony, the leaked document exposed how the two candidates had callously and irresponsibly appropriated almost everything belonging to the people even when they were not sure of winning the election.

At a time of institutional meltdown like this, anything can happen especially in a party that has an uncanny capacity for irrationalities. We have all watched with disdain the distasteful disagreement among the key stakeholders in the party at the centre over the power-sharing, and very lately too, the shocking revelation of corruption which is now weighing heavily on the neck of its National Chairman, Iyorchia Ayu. Like a gargantuan purulent sore or festering corpse abandoned by close relations, the PDP has become a public health hazard in Nigeria. And no doctor can heal it because its foundation is built on the principles and ideology of looting. A party founded on the tradition of sharing and looting can never survive an ideal politics of good governance.
By being unable to put its house in order, by playing politics with its own constitution, the PDP at all levels has shown itself as a party that cannot be trusted with power. They had done it before; they failed to meet the aspiration of the people. When it became clear to them that they could not survive the removal of the feeding bottle from their mouths, they practically went down on their knees begging the people for forgiveness.

Even at that, it has now become obvious from the unfolding drama that no lesson has been learned. Governor Nyesom Wike of Rivers State, in a moment of eccentricity, had cautioned the presidential candidate of the party, Atiku Abubakar, on the consequences of taking the people for granted for too long, urging the party hierarchy to return to the path of justice. But, as they say, when a crisis has reached a stage of self-destruction, the brain ceases to work.

The PDP in Ogun State is at a stage of self-annihilation by watching its standard bearers condescending to a ridiculous level of concocting and signing an illegal document on how to share the commonwealth of the people in broad daylight. One thing they have failed to realise is that Ogun State is no longer a place for political charlatans. In the last three and a half years of the present administration, Governor Dapo Abiodun has practically and successfully laid a benchmark for good governance.

The least one would have expected from a party that is angling to take over the reign of power from the incumbent governor is a programme of action that is not only unbeatable but also implementable. That way, the electorate would be able to weigh the better option. But unfortunately, that was not the thinking of the state compradors when they sat down to concoct the document that has now thrown spanners in the wheel of their progress. No blueprint on the socio-economic problems, infrastructural development, healthcare delivery system, insecurity, education as well as other myriads of challenges confronting the state in a period of global economic meltdown.  All they care about is winning the election by default. Need they be told that Ogun State with its sophistry, educated and enlightened citizenry has gone far beyond that level of pettiness?

Thanks to the eagle eyes of the Whistleblowers who alerted the people of the evil plot even before it was hatched. Never again will the state fall back into the abyss of the immediate past era of impunity and executive recklessness when things were done without recourse to the people’s feelings, emotions, and sensibility.

Eyes are now open more than ever before. Therefore, there can be no more room for any form of arbitrariness, greed, or avarice. With campaign activities now effectively on, what the electorate will want to see in the candidates who would be going round every nook and cranny of the state canvassing for votes is their antecedent and what they are bringing to the table for the good governance of the state; after all, periodic election and the ultimate power transition is to ensure responsible and accountable governance. Accountability is a key requirement of good governance as a fulcrum of democracy. Good governance is the process of measuring how elected office holders conduct public affairs and manage public resources and guarantee the realization of human rights in a manner essentially free of abuse and corruption and with due regard for the rule of law. In its wider scope, good governance includes identifying a vision, developing a strategy, selecting and supporting leadership to deliver that strategy, assurance that progress is being made, stewardship of resources, and the guardianship of quality and safety-all done to the highest standards of probity and transparency.

For us in Ogun State, the ideology of godfatherism is no longer fashionable. So also the idea of surrogacy by those who want to control the levers of power has irretrievably crumbled. It is an open secret that the immediate past Governor Ibikunle Amosun is privy to some of the underhand dealings involving Akinlade and his cohorts in their desperation for power. While playing the ostrich, masquerading as a dedicated supporter of the presidential candidate of the All Progressives Congress (APC), Asiwaju Bola Ahmed Tinubu, at the same time, he deploys some of his surrogates to the opposition party to undermine the re-election bid of Governor Abiodun. But in doing so, Akinlade took his desperation for power a notch higher, signing a deal for sharing the proverbial national cake he had never been a part of its baking in the first balance. For most stakeholders in the state, that was the highest level of disingenuous. Yes, queer and strange, indeed.

In a quick rebuttal of his alleged involvement in the shady deals signed by Senator Ibikunle Amosun (SIA) Media Office to ward off the shame and embarrassment it has caused, Amosun exonerated himself, saying the report linking him to the PDP was aimed at discrediting his hard-earned reputation.

His words: “The attention of Senator Ibikunle Amosun has been drawn to media reports, claiming that he has entered into a political deal with the Peoples Democratic Party (PDP) in Ogun State and Hon Oladipo Adebutu.

“We wish to state that the report is false and malicious. Senator Amosun has no agreement with either Hon Oladipo Adebutu or the PDP in Ogun State.

“This story is nothing more than mischief to mislead the public and discredit the hard-earned reputation of the former governor of Ogun State.

“We have stated before and wish to state once again, categorically, without any fear of contradiction that, Senator Ibikunle Amosun, has nothing to do with the PDP in Ogun State. And he is not a party to any alliance formed with anyone or group of persons in the party.”

The rest is left to the members of the public to discern the truth and genuineness of the disclaimer knowing the intrigues that culminated in the exit of Akinlade from the APC.

With or without his involvement in the illegal power-sharing deals, the desperate ambition by Adebutu and Akinlade to govern the state by default has already run a full circle with Tuesday’s (September 27) judgement of the Federal High Court in Abeokuta which nullified all Ogun PDP held on the 25th of May, 2022.

Hon. Justice O.O Oguntoyinbo, Tuesday, who delivered the judgment, ordered that the party should immediately conduct of fresh governorship primaries within 14 days using the INEC-certified delegates list to accommodate all interests/groups. It also barred the electoral umpire from recognizing Ladi Adebutu as Ogun state PDP governorship candidate for the coming 2023 general elections.

By this judgment, Otunba Jimi Adebisi Lawal (JAL) has won but the PDP is in a dilemma. The State Chairman of the party, Hon. Sikirulah Ogundele, in his reaction to the court’s verdicts, said the party would study all the judgments and take the appropriate line of action based on the advice of its legal team.

Whichever way the pendulum eventually swings, the fact is that Adebutu and Akinlade have by their action inadvertently cast a tragic pall over the capacity of the PDP to deliver on its promise to provide good governance. And it speaks to the imperative of the need by the electorate to scrutinize candidates who will be parading the streets to seek their votes. It suffices to say that a party that flouts its internal rules of engagement cannot be trusted with power.

It is not by mere coincidence that the PDP at the state and national level has been so enmeshed in the battle of wits. From the outset, it was never conceived as a genuine political party with the interest of the masses. It was created to serve the interest of a few power mongers.  And until those who control the levers of power return to the principles of service and fairness to all, peace will remain ever elusive to the party.

As earlier posited, a party that is founded on the principles and ideology of looting can never survive a genuine test of integrity, which is why the ambition of Adebutu and Akinlade to govern the state has hit the rock. The same fate also awaits any other candidate angling to take over the reign of power from the incumbent Governor Abiodun with the sole aim of appropriating what belongs to the state’s people.

By playing intrigues over the sharing of public positions even when the election has not been won, Adebutu and Akinlade have wittingly or wittingly pitched themselves against the collective aspiration of the people for the rapid socio-economic and industrial transformation of the current government in Ogun State, which has been the main preoccupation of the administration of Governor Abiodun since its inception. Without necessarily gloating over the fate that has befallen the party and its flag bearer, the judgment denotes the triumph of light over darkness.