[OPINION] No Saint Among The Presidential Hopefuls! 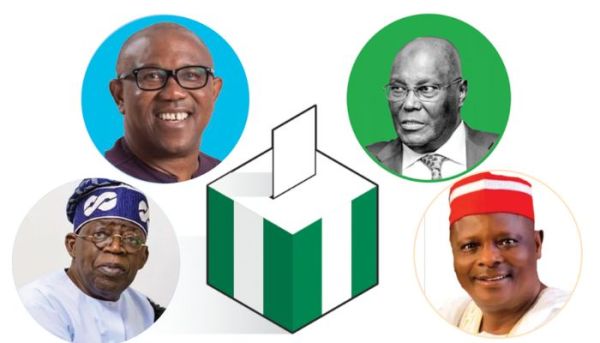 A few weeks to the 2023 general elections, the political atmosphere is heightened by accusations and counter accusations of corruption by the two leading political parties.

It was the APC that fired the first salvo. About a week ago, the Tinubu/Shettima Campaign Organization called for the arrest and prosecution of the presidential candidate of the Peoples Democratic Party (PDP) Atiku Abubakar for alleged money laundering and a breach of the penal and criminal code.

The organisation made the call during a press conference in Abuja, maintaining that Atiku does not enjoy any immunity. Addressing newsmen, the heads of media directorates of the organisation Dele Alake, Festus Keyamo, Bayo Onanuga, Femi Fani-Kayode, and Idris Mohammed, also urged Atiku to resign his candidature and apologise to Nigerians for allegedly using private accounts to siphon monies from the public treasury.

According to them, the campaign organisation will pursue legal means to seek the former vice president’s disqualification from the elections next month for alleged corruption. The development was on the heels of corruption accusations by Michael Achimugu, a former aide to Atiku. Achimugu had claimed that the PDP chieftain used the Special Purpose Vehicle scheme to take funds from an ex-Plateau State governor Joshua Dariye who was convicted for the misappropriation of the Ecological Fund. The former governor has been pardoned by President Muhammadu Buhari. While Atiku was Nigeria’s vice president from 1999 to 2007, Dariye was a governor during the same period.

On Sunday, January 22, 2023, the Atiku Campaign ‘reciprocated the APC gesture’ when the Presidential Campaign Council, PCC, of the Peoples Democratic Party, PDP, asked the National Drug Law Enforcement Agency (NDLEA), and the Economic and Financial Crimes Commission (EFCC), to arrest and prosecute the presidential candidate of the All Progressives Congress, Asiwaju Ahmed Tinubu, in order to avoid worsening Nigeria’s already bad situation. This was contained in an address read by members of the PDP PCC Strategic Communications and Media Teams, in Abuja. Members of the team include the Director of Strategic Communications, Bashorun Dele Momodu, the spokesperson of the PCC, Daniel Bwala, media adviser to the PDP presidential candidate, Atiku Abubakar, Mr Paul Ibe and the special assistant, public communications to Atiku, Phrank Shaibu among others.

Reading from a prepared text, Shaibu noted that Nigeria is in a precarious situation and any wrong decision taken in the choice of who becomes the next president could spell doom for the nation. He said, “Nigeria is battling many problems; we have banditry and terrorism ravaging many towns in the North, militants attacking oil facilities and bringing the country’s economy to its knees in the Niger Delta while secessionists are holding the South-East to ransom. “It will be a huge disaster to add state-sponsored drug trafficking to the mix.”

He explained that Tinubu’s forfeiture of $460,000 alleged to be proceeds of crime, specifically the sale and distribution of heroin to authorities in the United States, is worthy of further probe. Shaibu further said, “Nigerian law is clear. Criminal cases have no statute of limitation and can be re-opened at any time, especially for the sake of national interest. “We hereby call on the National Drug Law Enforcement Agency to immediately arrest Bola Ahmed Tinubu and prosecute him for drug trafficking. “Apart from the criminal angle to this call, there is also the national security aspect. “The world will recall what happened to Panama when Manuel Noriega, a known drug lord, became President in 1983. During his six-year rule, Panama became a narcos state as Noriega became an ally of the notorious Pablo Escobar’s Medellin cartel.”

The mudslinging between the two leading political parties is capable of overheating the polity as feared by the apex pan Yoruba socio-cultural organization, Afenifere in a statement signed by its national publicity secretary, Comrade Jare Ajayi, however it had brought to the fore the issue of corruption which had strangely been missing as talking point on the campaign train by the two big parties.

It had been the Labour Party and its presidential candidate that had been frontal in promising to fight corruption, unlike in previous elections of the APC with President Muhammadu Buhari making war against corruption the centrality of his campaigns in 2015 and 2019 respectively.

Giving the fact that Nigeria is adjudged one of the most corrupt countries in the world by Transparency International (TI) and corruption is blamed for Nigeria’s underdevelopment, anything that should bring it into focus ahead of the election is a welcome development. Not long ago, PricewaterhouseCoopers (PwC) presented a report titled, “Impact of Corruption on Nigeria’s Economy to the Vice President, Prof Yemi Osinbajo, at the Presidential Villa, Abuja. The PwC team was led by Mr Uyi Akpata, Country and Regional Senior Partner West Market Area. He said that the report centered on the ways in which corruption had impacted the Nigerian economy over time. Akpata stated that “the results of the study show that corruption in Nigeria could cost up to 37% of Gross Domestic Products (GDP) by 2030 if it’s not dealt with immediately. This cost is equated to around $1,000 per person in 2014 and nearly $2,000 per person by 2030.”

It is therefore important for the authorities concerned to investigation the various allegations that the two campaigns have thrown at each other. The allegations should not be swept under the carpet. Even the presidential candidate of the Labour Party (LP) Mr Peter Obi who had been one of the most vociferous in condemnation of corruption and has vowed to fight the hydra headed monster was listed in the Pandora Papers. The Pandora Papers is a 2021 leak nearly 12 million documents incriminating hundreds of global politicians and wealthy elite for tax avoidance and corruption. The papers detail how such individuals sheltered money in offshore accounts, shell companies, and real estate investments. Obi has however denied any wrong doing, insisting that he has broken no law, but it also shows that there is no saint among the top presidential candidates. That said, the responsibility of choosing any of these presidential candidates to become Nigeria’s president even with the allegations trailing them rests on Nigerians with permanent voters’ cards (PVCs).

It is obvious that despite all the noises none of them is likely to be stopped from participating in the election at this time, but the information available to the electorate should influence who they would want to preside over the affairs of our nation that is already crippled by corruption. The ball is in the court of Nigerian voters and their date with history is February 25.