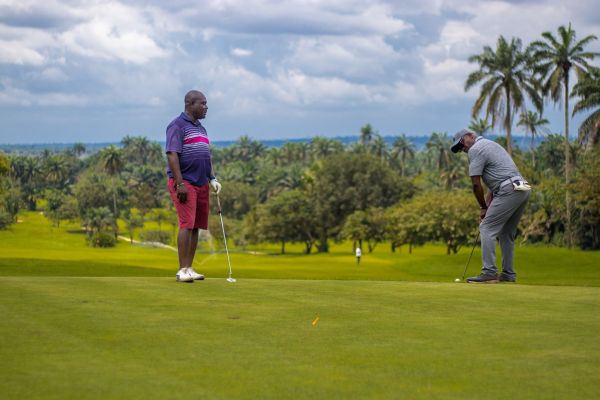 I spent two hours this Sunday morning at Ibom Golf Course watching Minister of Niger Delta, Umana Umana; Chief Victor Iyanam; Deacon Eno Efiong and Chief Franklyn Isong play. This was my first time at a golf course. I have not been particularly fascinated with this game, although many of my friends play, talk glowingly of it and try to persuade me to take it up. This morning the persuasion continued. ‘’It is both a mental and physical sport. It is a craft, and you have to learn it, practice and play to enjoy’’, the minister said, matter-of-factly.

As I walked around with them, watching and taking all in, a thought rushed through me. Who gave Gov. Victor Attah this idea? Is he a golfer? Is it the exposure he had? The iconic Ibom hotel and the golf course, established in the last year of Obong Attah in 2007 as the first major tourism facility in the state, helped to open up Akwa Ibom to the rest of the country. This facility is the first major reason visitors started flocking to the state for leisure, business and recreation. Last year, I saw old boys (and girls) of a secondary school in Jos partying at the Marina end of the hotel. I asked them why they chose the hotel for their rendezvous, and the answer was curt: "We've been hearing about this place".

That is the power of vision. Obong Attah had big ideas for the state: The airport; seaport; power turbines and the resort. Unfortunately, no governor has been able to build the seaport, as important and transformational as it is. And this brings me to the question: Why are some leaders able to do big things, and some cannot? Vision.

My mind then races down to the elections coming up soon. Which of these candidates will be able to build the seaport at Ibaka? Who has the vision, capacity and determination to bring this project to fruition? In the last 8 years, Lagos has built a city rail and Dangote has built a petrochemical complex. Akwa Ibom, whom shall we send?