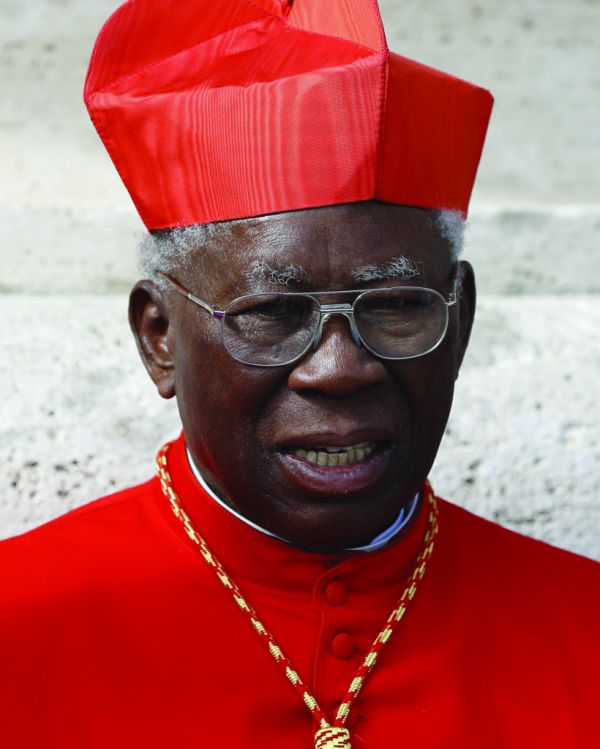 It is self-evident that Francis Arinze, Bishop and Cardinal of the Holy Mother Church, embodies the best Gospel values. No pun is intended with the caption ‘good news according to Francis’. It is but an iteration of the obvious truth. Right from childhood, when he accepted the Good News of Jesus Christ, he graciously lived by the Word and in the Spirit. He accepted and received the Gospel of Christ with wholehearted obedient surrender such that trust in divine providence measures his life. Having drunk from the fountain of grace and the eternal well of life, he iconizes the faith; indeed, his life translates the best of the Christian faith.

The primacy of God in all things is the simple parsing of Cardinal Arinze’s life. Arinze is theophoric; he is virtually reflective of Christian virtues and hopes.

Living within and beyond time, this humble servant of God dwells in the consciousness that eternity awaits. In reality, his life runs on grace. It thus generates a happy and glorious preface to Christianity in Nigeria in more ways than one. Encounter him, and you behold a true man of God. His life is a sign of contradiction, illuminating the path of people of our age across mountains and fountains. His life runs on virtues that he is ever ready to bear—with serenity, patience, inner peace, equanimity and humility—the misunderstanding, false accusations, antipathies and misdeeds meted out to him.

The primacy of God and self-abandonment in His providence constitutes the subjective motor that drives his life. Cardinal Arinze’s life in its simplicity maintains an indescribable peace of mind and doxological reach in order to capture the joy so eternal and real. He is in a constant stretch to capture the love eternal. A holy and peace-filled Prince of the Church, very intelligent and witty, his life is as inspiring as they come. He is a life- and family-defending and social justice-affirming leader due to his faith and as an expression of his love for Christ.

His filial trust in God funds the free surrender of his intellective and volitional faculties to divine providence. Thus, he approaches politics, power, money and women with Spartan discipline, legendary detachment, unimaginable prudence and absolute submission to divine providence. Some of his most recent works say it all: Radical Discipleship, God is Providence, The Holy Eucharist, Encountering Christ and Following Him, Marian Veneration: Firm Foundations, Divine Providence: God’s Design in Your Life, God’s Invisible Hand, etc. His life is a sufficient warrant to appreciate the Good News. It inspires because it is good news. It is as self-evident and straightforward as that.

Consecrated a bishop at the age of 32, he displayed an uncommon pastoral leadership and sanctity that sustained the Catholic faith during and after the Nigerian-Biafran war, being at the heart of the theatre of war. He was able to reconstruct the pastoral and administrative structures to sustain faith and hope. He accompanied the people through those difficult years, providing for their spiritual, psychological and material needs. In and through his episcopacy in Onitsha, especially during those difficult war and post-war times, it was clear that faith feeds hope. He was both a container and a conduit of grace. Without a doubt, his Episcopal ministry was a solid event of faith and a transmitter of love. On account of his hope-borne actions of the time, both the faith and the people survived. Beyond survival, both triumphed and thrived to the glory of God. And Arinze is good news!

Living in Europe these past couple of years has given me a firsthand understanding of how one person’s goodness can become the corporate gain of a people. The corporate nature of the effects of goodness is apodictic in His Eminence Francis Cardinal Arinze. Due to the ramifications of Cardinal Arinze’s integrity, encounters are easy with people of America and Eurasia. One experiences a welcome, an acceptance and a smile of goodwill immediately one associates himself either by nationality or faith with Cardinal Arinze. One directly shares in the merits of Arinze’s goodness. Verily, that’s a corporate benefit of original goodness. Cardinal Arinze is one of the best image-makers for Nigeria. He is of a similar value to Nigeria’s image as the national football team, Super Eagles. Their near competitors are Nollywood and the music industry. However, they prove to be mixed grills of the good, the bad and the ugly. Indeed, for being a Nigerian, Cardinal Arinze is one of Nigeria’s best living individual marketers and image-makers. Hence, Arinze is good news for Nigeria.

On the 1st of November 2022, His Eminence celebrated his 90th birthday, remaining that disciplined, measured, witty, holy, humble, meticulous and organized Prince of the Church. He records each Mass on a page and has never missed celebrating Mass in the last 64 years. You can predict almost accurately what Cardinal Arinze is doing by the time you are reading this piece.

For example, at 3 p.m., he is in the chapel praying; by 6.30 pm, he is praying; at 2 p.m. he is resting. His life verifies and vindicates the possibility of Christian life in our post-Christian, post-modern world. It attracts a lot of goodwill for us, his countrymen and women, and all associated with him by faith, humanity or culture. His life is good news to the poor, the confused, the rejected, the disturbed, the faithful and people of goodwill. His life is good news, and in this year of his 90th anniversary, we celebrate the gift and the goodness that is Francis Cardinal Arinze. Indeed, we celebrate the ‘good news’ according to Francis!