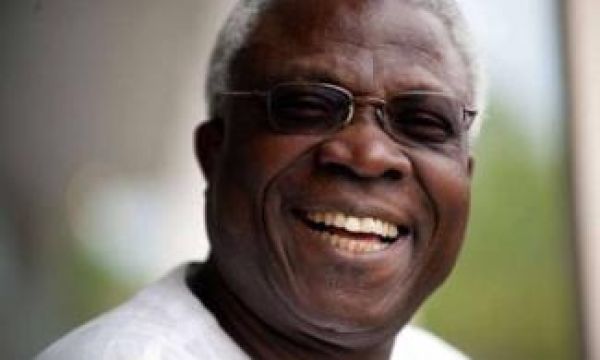 In the past two decades, we have seen an uncommonly principled professional devote his enormous talent and energy to the defence, protection, and promotion of culture and the generation and dissemination of ideas. In celebrating him, therefore, we are celebrating the best in ourselves and calling attention to the infinite possibilities of this lavishly endowed but sadly misgoverned country.

Jahman Oladejo Anikulapo one of Nigeria’s most assiduous art-and-culture activists and curators, turned 60 today. Below, with minor amendments, is my tribute to him 10 years ago upon his attainment of the age of 50.

Nigeria’s Arts and Culture community has literally declared January 2013 as The Jahman Anikulapo Month. January 16 is his birthday, and we have decided to ensure that every bird in the tree, every speck of the roadside dust, and every drop of the teeming lagoon sing with us as we troop out to mark the first 50 years of one of the most committed culture activists in our country’s history. And the past sixteen days of the month have witnessed a real cornucopia of compliments: from writers and readers, play-writers and play-goers, drummers and dancers, song-composers and singers, creative artists and art connoisseurs, music hall stars and street crooners, culture-policy wonks and culture-practice wags, fervent dreamers and flat-out realists, friends and foes of the arts. When I look at the young man for whom the bell has chimed fifty memorable times, and for whom the drums rumble so thunderously from street to street; when I wade through the flood of gists, jests, anecdotes, reminiscences, fabus of Jahman’s colleagues and contemporaries in his Baba Confuse days at the Theatre Arts Department of the University of Ibadan in the 1980s; when I put all these side by side with the generous encomiums pouring forth from those whose cultural lives have been so vitally touched by this passionately engaged maverick of a man, I cannot help wondering what exactly must be going on in his mind right now.

For the Jahman (or Oladejo as I’ve grown accustomed to calling him, teasingly) we have come to know is a culture warrior – no, a warrior for culture – an intensely motivated, doggedly driven, relentlessly inventive, remorselessly tenacious fighter with, ironically, a sometimes self-deprecating, self-effacing disposition. A true man of the theatre with an uproariously humorous mien and gravely serious inclination mixed in equal proportions, he has learnt to make us laugh at some of our grievous flaws and get deadly serious about what we have come to  regard as mere trifles. Honesty of purpose; the readiness to serve without seeking immediate reward; humility – genuine, elevating humility; that refusal to take oneself too seriously, which is one of the hallmarks of virtue – these are some of the attributes that have endeared Jahman to his throng of admirers. I still remember the day I introduced him to one of my students at the University of Ibadan, and the way young man exclaimed with a jaw-dropping curiosity: ‘Waow, so this is the same Jahman Anikulapo of The Guardian?!’ This admirer couldn’t believe that the editor of one of Nigeria’s leading Sunday papers could be so simple, so effortlessly accessible, so non-self-announcing.

Jahman is also blessed with the capacity for seeing (at times, detecting) the best and most enviable in others and going ahead to showcase it for the world to see. This is why that throng of admirers has decided to pay him back in his own coins, in a manner of speaking, by using his 50th birthday as a grand excuse for the celebration of that tirelessly gracious celebrator of other people.

But the word ‘celebration’ runs the risk of sounding showy, vain, even self-indulgent, especially in a country like ours that is so fraught with purchased adulation and vacuous veneration, a place in which a chunky part of stolen public funds is spent on prodigal laundering of the image of thieving public functionaries, with the mass media dripping with purloined publicity, and praise-singers berserk with flattery. It is precisely the attempt to find new ways of celebrating excellence, by seeking out, foregrounding, cherishing, and promoting the hidden nuggets of Nigeria’s  art and culture that powers much of Jahman’s vision and numerous activities. These were also the motivating factors for the birth of the Committee for Relevant Art (CORA) – that powerful art and culture advocacy organisation that is, without doubt, the most purposive, most consistent initiative of its kind in Nigeria today.

Yes, CORA (endowed with multiple strings just like the kora, its time-hallowed musical homophone, memory tonic in the hands of the griot). Born 2 June, 1991 under the pioneering chairmanship of the enterprising Yomi Layinka, and nurtured into vigorous maturity in the past two decades by a group of highly talented professionals, its two most visible faces are Jahman, our current celebratee, and Toyin Akinosho, a petroleum geologist by training and profession, a culture organiser and public intellectual who has committed professional apostasy and given his life to the arts. Astoundingly literate, cerebral, and cosmopolitan, Akinosho brings to cultural and literary journalism an insight, sure-footed elan, and magisterial panache that would make a professor of literary studies go green with envy. With Anikulapo and Akinosho, professional association has morphed into personal friendship (or vice versa!), and the result is as beneficial to culture activism in Nigeria as the companionship between Mike Awoyinfa and Dimgba Igwe is to print journalism.

The last 20 years have seen CORA throb us into sound and sense with its magic strings. Virtually every living Nigerian writer and artist has been a guest at or subject of its Quarterly Art Stampede, that decidedly unorthodox ‘parliamentary event’ in which burning issues in art and culture are foregrounded for fertile deliberation, while notable workers in the culture vineyard are fielded for combative interrogation and regenerative criticism. For the past two decades, CORA has stampeded lethargy and silence from the vital chambers of Nigeria’s arthouse.

The young organisation has also blossomed into fertile branches and diverse forums. Three of its many babies or off-shoots have been particularly effective. First is the Lagos Book & Art Festival (LABAF), an annual event whose goal is the aggressive promotion of a steady reading culture by bringing the book, the writer and the reading public together in a way that makes the book both attractive and desirable; and by intelligently highlighting those books whose ideas are too seminal and too purposive to be allowed to pass without illuminating deliberation. There is also the Arthouse Forum, organised on the platform of the Friends of the Arts Lagos, (FOAL, another CORA baby) deliberately focused on culture administrators and culture policy-shapers in Nigeria. And then, The Great Highlife Party, held monthly in collaboration with the O’Jez Nightclub at Surulere, Lagos, with the twin goals of restoring the significance and vitality of Highlife, ‘West Africa’s most important contribution to world music’, while celebrating ‘landmark achievements of the best on the Nigerian cultural scene’. True to its goal, this forum has brought back the inimitable melodies of Highlife, facilitated the restoration of its historic dignity and rehabilitation of some of its old, abandoned, and impoverished practitioners.

Youthful vigour, a strong, well modulated dissent, a restlessly inventive spirit, a voracious hunger for knowledge and ideas, an almost missionary capability for bringing people together, a keen ear for the music of the soul and the melody of the mind, an uncanny capacity to dream and dare – these have been CORA’s hallmark achievements in the past two decades, with the likes of Toyin Akinosho and Jahman Anikulapo at its helm. CORA has been nothing less than the Star of Nigeria’s Enlightenment; the living instance of the power of art to challenge, to connect, to restore, to conserve, to keep.

I have yet to meet another journalist of Jahman’s standing in Nigeria today with a clearer apprehension of Nigeria’s socio-political dysfunctionality, and its consequent frustration of our creative potential and decimation of our dreams. Like Matthew Arnold, the noted Victorian poet and literary theorist, Anikulapo discerned pretty early in his career the intimate, inevitable connection between culture and civilisation, enlightenment and the science of being.

Who could have forgotten the striking quality of Jahman’s articles, even in his rookie days as a journalist in The Guardian? Whether they were book reviews or theatre criticism, reports on cultural events, or general commentaries on arts and culture, his writings demonstrated the stimulating streak of scholarly journalism so characteristic of the efforts of the likes of Ben Tomoloju, Kole Ade-Odutola, Seun Ogunseitan (in those days), and Toni Kan, Molara Wood, Akeem Lasisi, Sumaila Umaisha, Edozie Udeze, Sola Balogun, Henry Akubuiro, Layiwola Adeniji, Akintayo Abodunrin (today). On account of the thoroughness of their research, the depth of their contents, their cogitative capability, and felicity of expression, many of Jahman’s newspaper articles sometimes found their way into my literary stylistics class at the university. (I often teased him and Tomoloju with the joke that if one strung their sentences together end to end, they would span the distance between Lagos and Ikere Ekiti!).