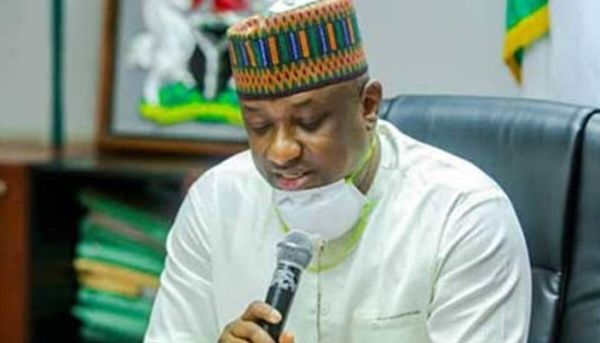 Plato made one eternal statement long ago – ‘The price good men pay for indifference to public affairs is to be ruled by evil men’. But the Nigerian experience is curiously different. Here, the so-called good men install evil men who they know are up to no good in power and watch them predictably ruin the country. Before addressing our minds to the hullabaloo being raised by Festus Keyamo, the APC presidential campaign chief spokesman, it will help to keep in view two incidents. Both will help form the canvas to paint the bleak future for the proposed Tinubu/Shettima presidency. As often said, those who elect bad leaders, especially knowingly and against clear and better options, are not victims of the attendant misrules but accomplices.

There is a video trending at the moment. It is of the 90-year-old Paul Biya, the president of Cameroon, who is now possibly overcome with dementia. He was guided to the stage to address the US/African summit. The multinational delegates were seated watching in bewilderment while Paul Biya stared at the paper just handed over to him by the aide who had sat him and prompted him to speak to the waiting embarrassed audience. Instead, Biya farted twice, completely oblivious to where he was and saying nothing.

There is also a picture of graduating schoolchildren said to have been taken in 1946 making the rounds for a while. The average age of the pupils in the picture was given as 9 years, which meant that one of the students named Amoda Ogunlere should be born most likely in 1937, making him 86 years old today. In traditional African society where the age grade system is in place Amoda Ogunlere and Paul Biya are in the same age grade bracket. What is more, that ‘ancestor’ called Amoda Ogunlere is believed to be the same as Bola Ahmed Tinubu, the same one the APC has put forward as its presidential candidate for the 2023 presidential election.

Paul Barthélemy Biya’a bi Mvondo, born February 13, 1933, has served as the president of Cameroon since November 6, 1982. He is the second-longest-ruling president in Africa. He succeeded Amadu Ahidjo as president upon the latter’s surprise resignation in 1982 and consolidated power in a 1983-1984 staged attempted coup in which he eliminated all of his major rivals. Unlike Ahidjo, Biya has refused to resign despite his debilitating health. More importantly, Biya came to power 41 years ago. His contemporary Bola Ahmed Tinubu (or is it Amoda Ogunlere?) is pushing to become president in 2023 despite all the visible health challenges similar to Paul Biya’s. Tinubu has been treating the nation to neologisms (new words) and word salad since his emergence as APC presidential candidate, indicative of a growing loss of touch with reality and deteriorating cognitive faculties.

Now, to Festus Keyamo growing drowning tantrums and APC desperate manoeuvres… The chief spokesman of the Tinubu/Shettima presidential campaign, Festus Keyamo, is getting increasingly desperate though for the right reasons. The tragic consequences of forcing ageing, sick, and integrity-challenged Bola Ahmed Tinubu as APC presidential candidate and pairing him with a fellow Muslim, Kassim Shettima, as running is producing all the grey hair Keyamo needs to grow in decades all in one go.

The self-inflicted injury is a product of impunity. Tinubu has insisted that it is his turn (Emi lokan) to govern Nigeria. It is all about turn-by-turn Nigeria unlimited and not the common good. With the 2023 presidential election standing barely 30 days away, Keyamo and other APC chieftains are being confused by the realities of that consequential action.

Come to think of it, what were Keyamo and the APC thinking when they chose Tinubu and Shettima? Here is a presidential candidate who could pass for a ghost. Nobody knows whether the man is Amoda Ogunlere from Osun state or Bola Ahmed Tinubu from Lagos state whose age, school, health, marriage, and more are all unknown and in doubt.

Two developments have kicked in and choked the ruling party. The main opposition PDP’s presidential candidate, Atiku Abubakar, has cornered the core north and Peter Obi of the Labour party has the upper hand in the south over Tinubu, even in his own Lagos. Keyamo and APC can easily see that Tinubu’s presidential bid is vanishing like the morning dew and the only thing left appears to them to be to blackmail Atiku out of the way. That way, they reckon, the north will back Tinubu and offer him a lifeline to revive his presidential ambition.

Desperation is a terrible cup to drink. It makes one lose sight of logic and commit most elementary mistakes. Otherwise, how come Keyamo conscripted one Michael Achimugu and his SPV story? I listened to the childish and badly concocted tape and heard the claim of Achimugu that he was an aide of Atiku when the latter was vice president and recorded him talking about special purpose vehicles (SPVs) and how to use the same to raise money to finance the party.

I asked a simple question when the charade broke: Where is Achimugu’s employment paper? To date, no one has provided it. Yet, Keyamo went to court seeking an order to disqualify Atiku based on the phantom claim of a blackmailer who the police ought to be processing to jail for his criminal act of blackmail and forgery.

Keyamo ought to know the path he chose is like a drowning man clutching at a straw. He and his party committed a gross error of judgment by imposing Tinubu and uninspiring Shettiman whose role in bringing on Boko Haram terrorism and the Chibok Girls saga is still being debated. Even moderate Muslims will not touch the ticket with a pole and APC is realising it in the country that has become so religiously charged.

Days ago, the same Shettima reportedly alleged that President Muhammadu Buhari and his vice Yemi Osinbajo are not supporting the party’s candidate. It was further reported that the APC governors were also up to something sinister against the Tinubu/Shettima ticket. Tinubu and Shettima ought to have listened to the president to know who his preferred candidate should be if they knew his support was crucial to their success at the polls. Instead, Tinubu muzzled his way and hijacked the ticket while screaming Emi lokan (it’s my turn).

The president’s body language seems to say, “since it’s your turn to rule Nigeria, why don’t you deliver yourself?” This is part of the developments now fueling Keyamo and APC’s desperation and producing poorly thought-out gambits like concocting the Achimugu’s cock-and-bull story.

APC had fine options. For example, a Yemi Osinbajo/Babagana Zulum ticket would have given the PDP a run for its money and there are also one or two possibilities. But blinded by impunity and belief that they could run with anything and shove it down the throat of Nigerians, they settled for Tinubu. But when they saw rather late that Tinubu would be a hard sell, the party brought in Shettima as his running mate in an attempt to cure the inherent poverty of the Tinubu choice. But Shettima proved to be an even harder sell and worsened the already bad ticket by alienating many more Nigerians further from the APC. This has ultimately imperilled the APC’s determination to retain power at the centre. The Tinubu/Shettima ticket is incurably defective and Keyamo knows it.

The APC is desperate. The first sign that the APC wants to avoid the ballot box at all costs was when its national chairman, Senator Abdullahi Adamu, told the world that Nigeria was not yet ripe for electronic voting. Unfortunately for the ruling party, BVAS has come to stay and the incidence form has also gone for good.

The unprecedented corruption and mismanagement in today’s Nigeria have reached a deep level so much so that the players, especially the cabal to which Buhari outsourced his presidency, would not easily allow another political party to take power and open the can of worms to angry Nigerians. They know the rot could spark cataclysms and convulse the nation with very likely devastating consequences for these predatory perpetrators.

It is now too late. Blackmailing Atiku to regain northern voters will not work. And Nigerian courts know how crucial this election is to Nigerians and will not come to the rescue of Tinubu/Shettima and APC. Better planning and less impunity next election season is all one can wish for Festus Keyamo and his co-voyagers in search of power through conspiracy rather than through the ballot box where the people will decide.