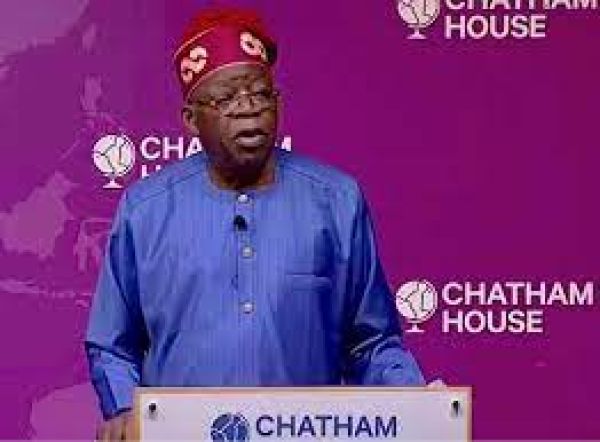 The much-touted lecture at Chatham House in London, England, where the presidential candidate of the All-Progressives Party (APC), Asiwaju Bola Ahmed Tinubu, was expected to finally come clean with the Nigerian people turned out a monumental embarrassment. But the press must not fall for its frenzy. It is nothing but a fragment of a long-running scheme. The apparent logic is that the show of shame would rapidly grow to overshadow the prevailing charges against the Asiwaju, especially a drug case.

But the Nigerian masses are no fools.

Like the audience at the Chatham House, the Nigerian masses will not backdown from probing the APC flagbearer on the serious allegations facing him. These allegations, of course, hover around his biographical details, such as name, age, state of birth and origin, education, career, and the source of his sudden billions. Throw in perjury, bribery, forgery, and so forth… And now the incident at Chatham!

There is also the issue of a failing health. Even blind men could see that the Asiwaju no longer has the physical ability nor the mental stability for any serious leadership position. Further, Nigeria’s misfortune with two ailing presidents—in Umar Yar’Adua and Muhammadu Buhari—is still fresh in our memory. Though both leaders would become largely incapacitated while in office due to ill-health; they never appeared as unhealthy or as impaired as Tinubu before they were elected.

Not to be forgotten is corruption. Running away to a foreign land or dodging the press will not cut it. The masses are keenly aware that despite Nigeria’s sleazy reputation, none of her leaders in history—whether military or civilian—assumed the governance of the country with a background as shady as that of Bola Ahmed Tinubu.

Of course, most of these charges have been proven beyond reasonable doubt, and ought to be very disqualifying. However, Tinubu’s montage of mess has lingered up to the point of shaming Nigeria at the Chatham House, because of the prevailing socio-political culture at home. The civil society is as wobbling as the country’s economy. The local press, which is typically vibrant, has become understandably overwhelmed or intimidated and thus appears to be treating anything relating to the Asiwaju with kid gloves.

BUT the allegation of drug trafficking is a new low in the Nigerian presidential politics. Tinubu and his handlers recognize its magnitude. They know it is like none of the other accusations and have been perfecting schemes that could overshadow the crisis. One could notice the pattern of the unending shows of shame in his campaign, including the Chatham calamity. The spirited shenanigan is a page from the Donald Trump political book: ‘The best solution to a crisis is another explosive crisis.’ Be that as it may, the Nigerian press must not allow the drug trafficking issue to be swept under the carpet without full investigation, no matter what.

The consequences are grave.

To refresh, the records show that Mr. Bola Ahmed Tinubu forfeited $460,000.00 to the authorities in the United States of America, allegedly for drugs trafficking and money laundering. The American country is also known to be very unforgiving of individuals who use drug proceeds to gain power in foreign nations. A perfect example is the case of Manuel Antonio Noriega, the former President of Panama.

Like Tinubu, Noriega had amassed a huge personal fortune but had a background tainted with drug allegations. Though the U. S. authorities initially turned a blind eye to the Panama president, allowing him to enter the country as he pleased, they chose the pertinent time to exhume his drug case. They eventually convicted Noriega, removed him from power, jailed him for life, and shamed his country forever.

A similar fate awaits Nigeria if Tinubu is ever to emerge president. Like the incident at Chatham, the world would like to know the Asiwaju. Since the former Lagos State Governor has continued to deny any connection to massive corruption in Nigeria, the logical question becomes: What is the source of this man’s sudden billions?

Any serious attempt to answer the above question must peep into Tinubu’s evasive past. The drug case that once led to his forfeiture of $460,000.00 will automatically take center stage.

Some legal commentators have argued that the narcotics case is barred by the Statute of Limitation and Double Jeopardy Clause of the Fifth Amendment to the US Constitution. But they are merely glancing the gist from a foggy lens. The objective fact is that the very nature of this high-profile case still presents prosecutors clear legal avenues to explore the Separate Sovereigns Doctrine to seek Tinubu’s indictment. Yes!

Instead of addressing the drug charges, the Tinubu campaign has deployed a cocky cocktail of coercion, intimidation, distractions, and deceptions, heaping insults on the media organizations, and going as far as threatening them with baseless lawsuits. In short, the APC flagbearer has been doing everything humanly possible to avoid being held accountable for his past or present. The man dodges press interviews. He dodges town hall meetings. He dodges presidential debates. He dodges the truth. Thus, the hullabaloo at the Chatham House was not unexpected.

THE PRESS must not succumb to the sheer arrogance and political chicanery. The men and women of the press should live up to their constitutional obligations and thoroughly interrogate the former Lagos State governor on the drug allegations. Please!!

Importantly, there must be consequences for bad behavior in the relationship between the press and politicians. The media organizations must not be seen to be promoting an anti-democratic character—in this case Mr. Bola Tinubu—who continually circumvents an integral role of the press, which is to not only ensure that people in a democracy are free to receive information and ask questions, but also to investigate individuals seeking public office without fear or favor.