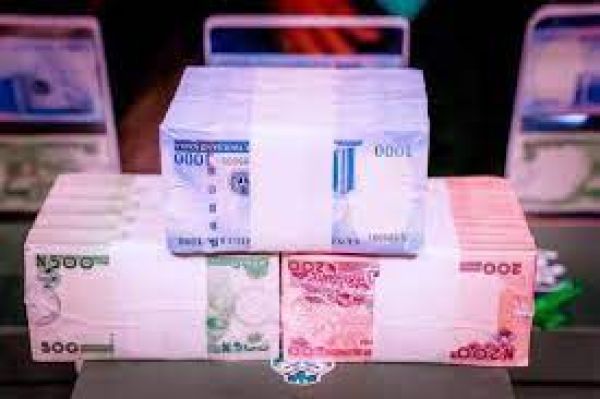 Stop and think for a moment that the WEEKLY over-the-counter (OTC) cash withdrawals by individuals and corporate entities would no longer exceed N100,000 and N500,000, respectively. How does this kind of policy directive help individuals and businesses?
Why do we often assume that the people who run that CBN know how to manage monetary policies that bring about economic stability and that they are acting in the best interest of Nigerians? How wrong to think so! Just take a look at the humpity dumpity tumbling state of the Naira in the last few years, despite crazy banking and monetary regulations. How have they helped the economy except impose hardships and welcome unbridled inflation?
So does the Central Bank of Nigeria (CBN) really think that a near cashless society is what we prefer as a people to the freedom and privacy that go with a cash based economy? Perhaps, our preferences don't matter?
The recently published policy directive of the Central Bank of Nigeria (CBN) on cash withdrawal limits is not only a recipe for untold hardships to be foisted on the people but a control measure that would strip Nigerians of the control over their money.
How then is it proper for the CBN to impose a 10% tax on every cash withdrawal of above ₦100,000 in a week?
Whereas I am in no way near being a professional economist, I claim the understanding of what constitute freedoms and civil liberties. Therefore, the mix use of cash and electronic money as we presently have, serve the interests of Nigerians better.
One of the cardinal principles of banking is secrecy yet we were quiet when were about to lose it and we intimately lost it in the name of fighting fraud and corruption. But corruption and fraud not only increased after we lost banking secrecy, they became enthroned in high and low places.
Banking secrecy guaranteed freedom and privacy. Therefore, at a time, nobody by our banking laws was permitted to know what was in another person's account. Even law enforcement agents were restricted from inquiring into certain accounts and the banks were expressly prohibited from disclosing details of any bank account with the amounts to its credit or debit. The is law is still there but overtaken by new policies and laws which haven't improved the system.
Banking secrecy and not necessary safety of funds is why business people take their money and hide them in safe financial havens. No serious business man would leave his money in a banking system where every bank teller who graduated from polytechnic yesterday can easily pry into their accounts and tell his friends about how rich or poor a certain bank customer is. But those were the consequences when we imported measures to fight illicit banking operations to combat money laundering, terrorism financing and now kidnapping, without considering our peculiar situations and the need to preserve freedoms and civil liberties.
We certainly have not contemplated much, the consequences of a near cashless society that the CBN plans to impose on Nigeria.
For example, as a lawyer, I have had cause to witness the many times the Nigerian Police obtains exparte orders of inferior courts to block bank accounts of anybody on mere complaints by another person. Just for merely organising protest, some #EndSARS leaders had their accounts blocked.
Nigerian citizens must learn and make up their minds to understand and get involved with public affairs as the future is coming faster than we thought and we don't seem prepared.
Have we considered how much control the authorities would have over citizens and their life when they can block bank accounts at will in a cashless economy?
Which person or business will exercise reasonable control over their affairs with the ridiculous cash withdrawal limits the CBN intends to impose?
We lost the right to privacy when they took away banking secrecy and we stood by. Now they want to take away the right own and control moveable property (money) and we are again standing by?
It is about what the Nigerian people want because they own this country even though the majority of them have been made to forget that fact.
Policy makers can't lord over Nigerians and take away their rights on the assumption that institutions know better and always act in the public interest. That's not often true.
Would the Nigerian people accept these restrictions of cash by the CBN? That question is up for the National Assembly to answer on behalf of the Nigerian people.
A once overzealous CBN Governor, Charles Soludo wanted to redenominate the Naira. Even when he got the approval of then President Olusegun Obasanjo, the National Assembly stopped him and Nigeria was later shown to be better off than countries which experimented with denomination.
This present CBN appears to have expired with ideas and has been merely experimenting. Perhaps, its time is up. Therefore, the National Assembly must now rise and interrogate it.
1552 times