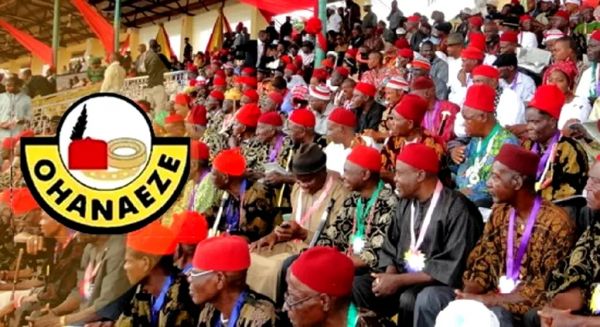 OHANAEZE Ndigbo has vehemently denied an allegation of demanding money to support the campaign for Nigerian President of Igbo extraction, ever since the agitation began.

The organisation described the accusation as “most fallacious, mendacious and callous of all the falsehoods aimed at tarnishing the image of the Igbo, and morally reprehensible fabrication from the pit of hell.”

Ohanaeze said that of its own volition, it has been on advocacy visits to many political and traditional leaders across the country, canvassing support for a President from the South East of Nigeria.

Ohanaeze spoke, as the Chief Whip of the Senate, Senator Orji Uzor Kalu of All Progressives Congress, APC, Abia North, took a swipe at the Presidential candidate of Labour Party, LP, and former Anambra State governor, Peter Obi, saying that the race for Presidency in 2023 should not be reduced to a regional contest, just as he appealed to the Igbo  not to make Presidency a regional issue, but wait for their turn and work with other zones in the country to achieve their ambition.

He also assured that the Igbo will benefit more from Tinubu’s presidency.

Ohanaeze said this while distancing itself from a trending social media clip alleging that Ohanaeze Ndigbo demanded payments from one Comrade Kennedy Iyere as a condition to support the campaign for a Nigerian President from the South East. Ohanaeze said such never happened.

Responding to the allegation, through the National Publicity Secretary, Dr. Alex Chidozie Ogbonnia, Ohanaeze Ndigbo stated: “Our attention has been drawn to a social media clip making the rounds indicating that Ohanaeze Ndigbo Worldwide demanded payments from one Comrade Kennedy Iyere as a condition to support a Nigerian President from the South East. This is the most fallacious, mendacious, and callous of  all the falsehoods aimed at tarnishing the image of the Igbo as the Judas category that values money more than human conscience.

“On the advocacy for a president from the South East of Nigeria, the Ohanaeze Ndigbo took the message to all parts of Nigeria; including former President Olusegun Obasanjo, the Sultan of Sokoto, His Eminence, Muhammadu Sa’adu Abubakar III; Chief E K Clark, Chief Ayo Adebanjo, former President Goodluck Ebele Jonathan, the British High Commission and so many other places.

“Several other Igbo activists and interest groups such as Nzuko Umunna led by Senator Chris Anyanwu, Arc. Ferdinand Agu, among others, were  also at the forefront of the advocacy.

“On December 13, 2021, I addressed an Open Letter to Asiwaju Bola Tinubu, reminding him that it is the right of the South East to produce a President for Nigeria and urged him not to contest the 2023 presidency on the grounds of equity, justice, and fairness. I also wrote Alhaji Atiku Abubakar, reminding him that the current Igbo travails are a result of our support for his candidacy in 2019.

“A simple search on the internet will reveal that Ohanaeze had made numerous press releases urging Nigerians and the international community to lend support to the quest by the South East for Presidency. Ohanaeze Ndigbo further propagated the advocacy to the Southern and Middle Belt Leaders, SMBLF, led by Chief E K Clark, and Chief Nnia Nwodo as the Coordinator-General.

“Our gratitude goes to the SMBLF for their irrevocable position to support an Igbo of the South East for Presidency in 2023. Similarly, we thank Chief Olusegun Obasanjo for receiving us in his Abeokuta residence about three times. Above all, the Ohanaeze message has found expression, resonance, and traction in the irrepressible power that is inherent in the Nigerian masses”.

Speaking specifically to the allegation on social media credited to one Comrade Kennedy Iyere, claiming that Ohanaeze demanded money to support Igbo Presidency campaign, Ogbonnia explained: “The truth of the matter is, in October 2020, Chief Damian Okeke Ogene, former President of Ohanaeze Ndigbo, Anambra State chapter was contacted by Iyere to invite the seven state presidents from the seven Ohanaeze states. Ogene explained to Iyere that members would be coming to Awka from distant places such as Port Harcourt, Owerri, Aba, and Ebonyi and that it would not be possible for them to go back to their locations on the same day. Iyere promised to secure a hotel accommodation for the seven persons, and that he would also pay for their transport costs.

“At the meeting  in one hotel at Awka, Iyere was seated with whitemen and he highlighted the unbearable injustice to the Igbo by the past Nigerian leaders and the equity in a South Easterner to become the President of Nigeria  come 2023. Paradoxically, we were very delighted and also curious that non-Igbo and white men were championing an Igbo cause.

“I am rather shocked by the depravity and a kindergarten shenanigan with which Iyere painted his encounter with the Ohanaeze Ndigbo; that Ohanaeze Ndigbo demanded payment from him to support an Igbo for Presidency. This is the most morally reprehensible fabrication from the pit of hell.

“Surely, we failed to attend his subsequent meetings for two reasons: through a Freudian slip, a stench character deficit became manifest in his maneuvers at Awka; second, he espoused hate, invectives, and unwholesome remarks against our then President General, Chief Nnia Nwodo, simply because, according to him, Nwodo did not pick his phone call.

“In the clip that has gone viral, several eminent Igbo sons were mentioned in a bad light. For  me, Comrade Kennedy Iyere is a pernicious sharp knife within; a conflict entrepreneur, social wasteland, political juggler, stumbling amateur, windbag, mischief maker, name-dropper, and a mundane predator, best to be avoided.

“Unfortunately, hard as he may try, most of the names that Iyere dropped in the social media are the cream Igbo titans, political avatars, tested moral edifice, pure, decent, and very much above reproach and his cheap and unreflective tarnish; the pillars of the current national movement”.