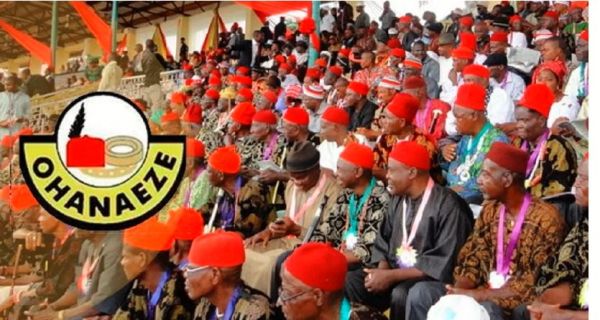 Apex Igbo socio-cultural organization, Ohanaeze Ndigbo Youth Council Worldwide has asked the people of Southeast to resist a full reign of terror being sponsored by enemies of Ndigbo through Simon Ekpa.

Ekpa, a self acclaimed discipline of the IPOB leader, Mazi Nnamdi Kanu had ordered Ndigbo to stay at home for five days.

Reacting, the National President of Ohanaeze Ndigbo Youth Council Worldwide, Mazi Okwu Nnabuike said it was now clear that Ekpa was being sponsored by enemies of Igboland.

He wondered how any right thinking person would ask people to sit-at-home for five consecutive days at a time the country’s economic woes were biting harder.

According to him, We are a few days away to the Christmas and New Year celebration, with a lot of bills for parents to pay, including house rent and school fees by January.

But someone who is in far away Finland, in the comfort of his room is telling parents and breadwinners to stay at home for five days.

It is even more curious that the said Ekpa has no regards for Mazi Nnamdi Kanu’s lawyers, yet he claims to be Kanu’s disciple. The IPOB leader, Kanu spoke this week through his lawyer that he did not give order for any sit-at-home. He spoke on the economic implications on the same people he is fighting for their freedom. So whose interest is Simon Ekpa serving.

A clear analysis of his statement clearly showed that enemies of Ndigbo paid him to ensure a total destruction of the Southeast economy. Both Ekpa and his sponsors are enemies of Ndigbo and Mazi Nnamdi Kanu. But we will no longer allow their reign of terror to continue. This will not be allowed to happen.”

Okwu urged the people of the Southeast to ignore what he called a baseless and senseless order. This is moreso as the IPOB leadership has also come out to declare that there is no such sit-at-home.