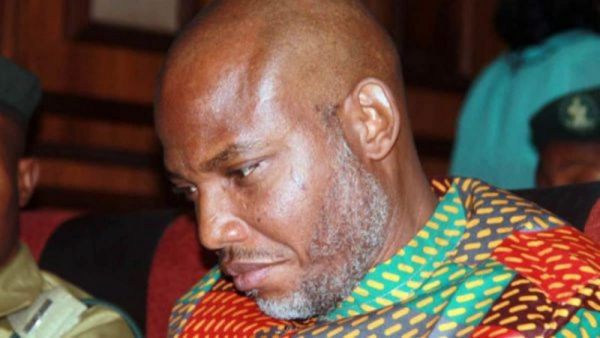 The apex Igbo socio-cultural organization, Ohanaeze Ndigbo has warned the federal Government that the detained leader of the Indigenous Peoples of Biafra (IPOB), Nnamdi Kanu must not die in the custody of the Department of State Services (DSS).

The national spokesman of Ohanaeze, Dr Alex Ogbonnia, gave this warning on Tuesday in a statement titled ‘Nnamdi Kanu must not die in prison.’

The group gave the warning while reacting to the current worsening health status of the IPOB leader.

Recall that Kanu’s lawyer, Ifeanyi Ejiofor, said the IPOB leader’s health has worsened as he had been diagnosed with gastrointestinal disorder following persistent heartburn.

The statement partly read: ‘The attention of the Ohanaeze Ndigbo Worldwide has been drawn to the deteriorating health of the Leader of the Independent Peoples of Biafra (IPOB), Mazi Nnamdi Kanu.

“Information reaching us indicates that ‘Nnamdi Kanu is currently suffering from gastrointestinal illness, which necessitates the constant use of antacids and other available medical treatments.’”

“It adds that ‘the DSS has refused to allow him have even the smallest amount of the prescribed painkiller, which could have given him short-term respite.

“Report from Ifeanyi Ejiofor, the IPOB’s attorney, further adds that ‘the DSS has repeatedly treated the existing court order—which specifically directed that Nnamdi Kanu should be granted access to his doctor for an independent review/investigation of his current health status—with the utmost contempt and disdain.”

It further said: “The above report should be very worrisome to any fair-minded patriotic Nigerian, the fair-minded and patriotic because it is self-evident that the Nnamdi Kanu phenomenon is a product of circumstances.

“The Governor of Sokoto State, Alhaji Aminu Waziri Tambuwal in a humane and patriotic candour stated that “the marginalisation of the South-East geopolitical zone by the Federal Government of Nigeria under President Muhammadu Buhari is crazy and unprecedented.

“Tambuwal adds: ‘I feel sad and disturbed each time I see the Igbo crying of marginalization. The Federal Government of Nigeria has been unfair to the Igbo. In all socio-economic activities is like the Igbo are not part of the nation.

“The President General of Ohanaeze Ndigbo, Ambassador Professor George Obiozor, an erudite professor and seasoned diplomat, has on several occasions advised President Buhari that the issue of Mazi Nnamdi Kanu is beyond the courts or the use of force; advising that it requires a political solution.

“Obiozor urged the federal government to embrace the values of justice, equity and fairness in their true sense for real peace, progress, unity and development to thrive in Nigeria. He argued that all over the world, the moment the populace becomes conscious of the existence of governance based on selective morality, outrageous paradox and double standards, the expected legitimacy from the people becomes well-nigh unattainable.”

“The Ohanaeze Ndigbo, the apex Igbo socio-cultural organization and several eminent Igbo have repeatedly appealed to the heart of Mr President to release Mazi Nnamdi Kanu on the premise of a political solution.

“The only living legend among those that fought for the Nigerian independence and the minister of Aviation in the First Republic, Chief Mbazulike Amechi presented the request to President Buhari when he visited Abakiliki, Ebonyi State, as his last wish.

“Earlier before that, Mbazulike had also met President Buhari in Aso Rock, Abuja for the same reason. In the interim, common sense will ask: why deny Mazi Nnamdi Kanu the necessary access to a medical doctor? This is very curious and raises a lot of questions.

“Finally, it is common knowledge that the incarceration of Nnamdi Kanu has rather contributed to the enormity of insecurity in the South East and one wonders what will happen if by the utter carelessness, negligence or unnecessary victimization, something untoward happens to Mazi Nnamdi Kanu.

“Instructively, many uninformed Nigerians share the base reasoning of the proverbial ostrich; the ostrich buries its head in the sand, joyously flapping its wings, and believes that it has escaped from reality. As in the ostrich, the civilised world is watching!”