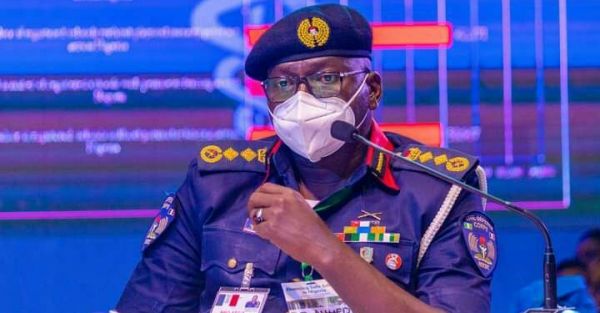 The Nigeria Security and Civil Defence Corps (NSCDC) says the federal government (FG) will need to do more in the area of technology if insecurity and oil theft are to be combated.

Speaking during a News Agency of Nigeria (NAN) forum in Abuja, Ahmed Audi, commandant general (CG), disclosed that the available technology was not enough to combat the menace.

He stated that the corps had arrested and prosecuted many of the pipeline vandals.

“I had a tour last month to pipeline locations, especially in Niger Delta, it is very sad, very, very sad and very devastating,” NAN quoted Audi as saying.

“If you see the amount of vandalism where you will see people go inside the river, sea and puncture pipes.

“I don’t know how they do it, I don’t know whether they have divers who go inside, puncture a pipe, use a valve, dig a hole and then they will connect the pipe to a house that is close to the river and begin to take the fuel.”

Audi added that the NSCDC was working to find the bad eggs among its personnel who may have compromised in the course of discharging their duties.

The CG assured that any of the personnel found culpable would be dealt with decisively.

“Anybody no matter how highly placed, no matter his level or rank that is involved in colluding or conniving or in some form of compromise with oil thieves would be severely sanctioned,” Audi said.

Speaking further, the NSCDC noted that the corps was in need of new technologies to tackle the level of pipeline vandalism and other criminal activities in the country.

“We have realised globally now that what is used to tackle insecurity is technology. It is easier when you have the technology,” he said.

“So, it is a challenge now in the corps that we don’t have enough, of course, you can never have enough, so we want to plead with the government just like Oliver Twist for more.”