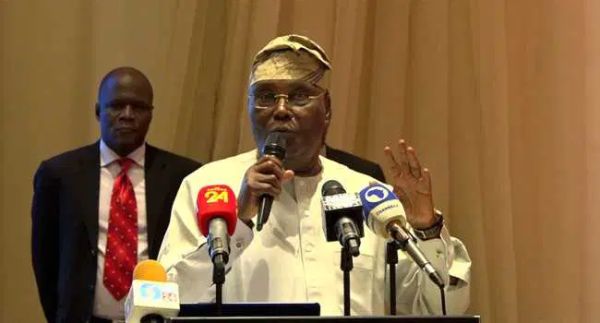 Atiku Abubakar, presidential candidate of the Peoples Democratic Party (PDP), says Nigeria was in safe hands when the opposition party was in power.

Speaking when he visited the Ooni of Ife, Adeyeye Ogunwusi, at his palace in Ile-Ife, Osun state on Tuesday, Atiku said Nigeria witnessed unprecedented growth and that it was a much more better country when PDP was in power.

The PDP standard bearer subsequently called on Nigerians to give his party “another opportunity” during the 2023 elections.

Atiku said the country enjoyed its “greatest growth” when the PDP was in power for 16 years.

“You’ll all recall that from 1999 to 2015, Nigeria witnessed its greatest growth, biggest prosperity and peaceful coexistence during the PDP era,” he said.

“So that we can secure this country again, make the nation more prosperous than any other country in the continent of Africa.

“If the mandate is given to PDP, the unity, peace and stability will be achieved across the nation which will lead to government of national unity.”

Atiku also said that his administration will ensure that power is devolved to states, local government councils and traditional rulers.

“We’ll also ensure that national assembly amend the constitution to give power to all traditional rulers,” he said.

“I’ve not come here in this palace to campaign but I am here to give respect to your Royal Highness.”