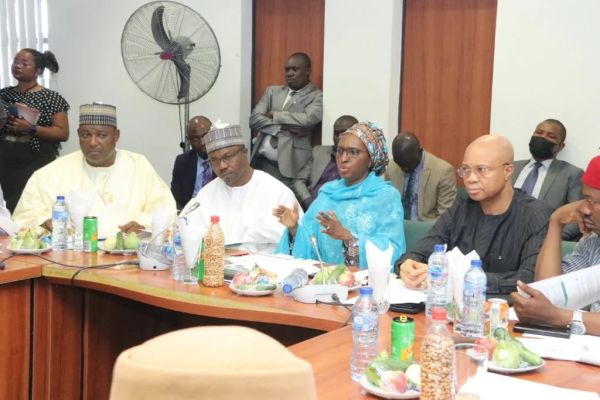 In a statement issued by Yunusa Tanko Abdullahi, special adviser, media & communications, ministry of finance, the minister said this on Tuesday at a meeting with the house committee on appropriation.

Ahmed, who dismissed the budget padding allegation, explained that the N206 billion was an oversight.

The minister said the N206 billion was for the national social safety nets project funded by the World Bank and domiciled in the humanitarian ministry.

She noted that the wrong coding resulted in the item being wrongly captured as “purchase of security equipment” and had nothing to do with budget padding but an oversight.

According to her, the minister of humanitarian affairs and disaster management should have called the attention of the budget office to the anomaly like her counterparts in other ministries.

She disclosed that the ministry of defence, ministry of power, among others, also committed the same error.

Ahmed, however, called for collaboration among ministries, departments and agencies (MDAs) to forestall such oversight.

The statement added that Sadiya Umar Farouq, minister of humanitarian affairs, backtracked and exonerated the finance ministry at the committee’s meeting.

“Before I comment on the content of the comment, let me comment on the context. I was at the briefing when the minister was asked a question about the code, and she said that she did not understand that and that she would get clarification. Then the chairman obliged that the clarification will be brought and the matter was closed,” the statement quoted Farouq, represented by Nasir Sani Gwarzo, permanent secretary, finance ministry, as saying.

“One of the members then, in his summary, insinuated that that was padding, and that was what the press took. So, the minister of humanitarian affairs did not mention or use the word padding.

“She requested time to correct this mistake that she observed. Secondly, we did not go to the media refuting or challenging, rather we wrote a letter to the ministry of finance, budget and national planning seeking clarification. Therefore, I concur totally that what has been provided in the budget is part of our project. The only mistake was the coding which has been clarified even before this interactive meeting.”

The statement added that the permanent secretary, who stood in for the minister, distanced her from the budget padding statement.

Farouq, who had appeared before the senate committee on special duties to defend the 2023 budget proposal, claimed that the ministry requested some projects for the North East Development Commission (NEDC) and the National Social Safety Net Project in the 2022 budget, which were not released.

She said that her ministry was surprised that the money inserted was then 10 times the 2023 proposed budget for her ministry.

“Yes we made mention of the projects for 2022, which was not released, and part of it was for the NEDC,” she had said.

“The money was not released and now we have seen it recurring by almost 10 folds, and we are also going to clarify from the Ministry of Finance to know why this increase, despite the fact that the previous year, the money was not even released for the project. So, we will get the details and then send them to you on that.

“This is all I can say for this. I cannot give full details of how this amount is going to be utilised because it is something that was negotiated between the Ministry of Finance and World Bank.”

Aliyu Betera, chairman, house of representatives committee on appropriation, expressed the displeasure of the committee with the humanitarian minister over her continued failure to appear before the committees of the house when summoned.

Betara asked the humanitarian minister to appear and defend the ministry’s budget.