Many persons, including two children, are believed to have been killed in a fire outbreak at the popular Nembe-Bonny Jetty Waterfront in Port Harcourt, Rivers State.

Several boats and goods worth millions of naira were also destroyed in the inferno.

The cause of the fire outbreak is yet to be known as of press time but sources at the jetty said a boat loaded with petroleum product suspected to be kerosene caught fire which extended to other boats packed at the Jetty.

A source attributed the incident to the handwork of those he described as dealers of illegal and adulterated products.

He said the particular boat that ignited fire was loaded with petroleum products suspected to be kerosene.

He said the men of fire service arrived the scene of the incident after several boats and goods belonging to traders at the jetty were gutted by fire .

“The cause of the fire outbreak is not far from those who carry out illegal selling of petroleum products at the Jetty.”

“The particular boat where the fire ignited from was said to have been loaded with petroleum products suspected to be kerosene.

“The fire later extended to other boats packed at the Jetty as well as goods worth millions of naira belonging to many traders that do business at the Jetty,” he said.

The State Police Command Public Relation Officer, SP Nnamdi Omoni, could not be reached for comment.

Nembe-Bonny Jetty Waterfront is notorious for all kinds of criminal activities such oil bunkering and illegal trading on petroleum products. 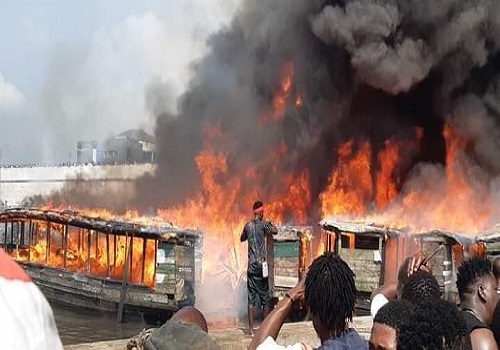 Gumi: Bandits Commit Terrorism But They Are Not Terrorists

Fuel Subsidy Removal: Nigeria is between the devil and the deep blue sea – Dr Muda Yusuf

EXPLAINER: What to know about Omicron, new COVID ‘variant of concern’

Nigeria can be peaceful, united if leaders value every section of Nigeria – Jonathan

‘Why we ‘warned’ Uba against challenging Soludo’s victory’

Ortom: I Didn’t Want To Return As Governor But God Rebuked Me

FG disburses N6bn to 6 colleges for curriculum devt, others

Investigate Me Over Insecurity In Imo - Okorocha Challenges IGP

2023 Presidency: No Southern candidate can win without northern support – Yakasai

No basis to beg Buhari to release Igboho - Afenifere