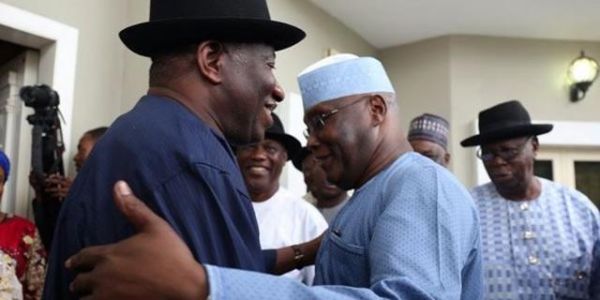 Nyesom Wike, governor of Rivers, says former President Goodluck Jonathan was asked by the camp of Atiku Abubakar to withdraw from seeking re-election in 2015.

He said this on Tuesday at the inauguration of the Akpabu-Omudioga-Egbeda Road in Emohua, Rivers state — the event was also attended by Dave Umahi, governor of Ebonyi.

Wike has been at the centre of the calls for Iyorchia Ayu to step down as the national chairman of the Peoples Democratic Party (PDP) on the grounds that the presidential candidate and chairman cannot be from the same region.

According to the Rivers governor, Jonathan went to London to appeal to Abubakar, who had defected to the All Progressives Congress (APC) at the time, to support his re-election bid for the 2015 poll.

“What I don’t like in people is that we forget history easily. In 2015, when Jonathan, as a sitting president, had won his primary, Jonathan went to London, in Dorchester Hotel,” Wike said.

“He went to plead with this our presidential candidate today, Atiku Abubakar, saying ‘please, my brother, come back to the party and support me’.

“You know the condition they gave to Jonathan? He should relinquish his ticket not to run as the president of Nigeria.

“That was a sitting president and the presidential candidate of a ruling party. They gave him condition.”

Wike insisted that it is in the interest of justice for Ayu to step down as PDP national chairman, adding that he had no problem with Abubakar as the presidential candidate.

“I don’t understand how people who made us lose election in 2015 can now say they are defending the party,” he added.

The Rivers governor also told Umahi to advise the APC not to bother to campaign in the state, adding that “here, everywhere is sealed up” in support of the PDP.