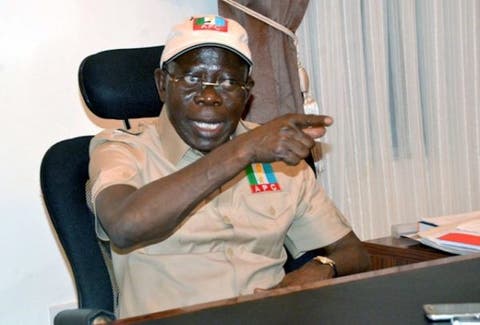 The National Chairman of the All Progressives Congress (APC), Adams Oshiomhole, has scored the administration of President Muhammadu Buhari high as it marks its first 100 days in office.

Oshiomhole, while interacting with journalists yesterday in Abuja, said that Buhari could beat his chest to say he started well in his second term, adding, “you cannot call him Baba go slow now, this time he is Baba fast.”

According to him, “Everything is about comparism because in 2015, after a 100 days, we did not have a federal cabinet, the President had not appointed ministers.”

The APC National chair said that from his interaction with a number of ministers, even the budget for 2020 was already being prepared.

He noted that the ministers having been assigned to their various ministries, had already started the process of taking over and trying to understand the challenges.

Oshiomhole explained that government is already effectively on ground, saying, that alone shows a remarkable departure if you compare what the President has done in 2019 to what he had done in 2015.

“You notice that this time, the President also organised a retreat for ministers immediately they were appointed. That retreat was not about entertainment, it was to discuss about Nigeria and the administration’s policy choices; and of course reminding the ministers about the fact that there is huge expectation out there at a time of dwindling resources.

“Now, government’s challenge is where do we cut cost so that we can find resources we need to sustain investment in infrastructure?”