Protest in Abia as soldier kills motorcyclist over N100 bribe 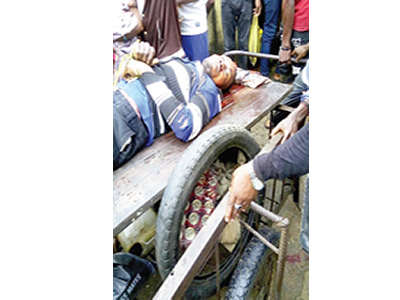 This came barely a week after soldiers in Aba forcibly shaved youths who wore dreadlocks after flogging them mercilessly.

Witnesses said the deceased had rode pass the checkpoint and refused to part with N100 to the soldiers.

Apparently angered by the action, one of the soldiers was said to have taken a motorcycle and gave Nwogu a hot pursuit.

The soldier was said to have trailed him to his village at Umuokereke Ngwa community in the same local government and shot him dead right in front of his father’s compound.

It was learnt that Nwogu’s wife is heavily pregnant.

“It is painful that life has become so cheap that a soldier can just kill without cause.

“Now, Chimaobi’s wife is heavily pregnant and may soon put to bed. He left three children, who is going to take care of them?” a witness said.

The killing of Nwogu caused panic in the area as youths of the community took the body to Ohanze and set the military checkpoint on fire, even as the soldiers watched without fighting back.

During a protest yesterday, human and vehicular movement was disrupted as vehicles heading towards Opobo Junction made detour in order not to be caught in the mayhem.

They also set ablaze was a makeshift Mobil police outpost, while policemen on duty were chased away, but later returned to disperse the protesting youths with tear gas and heavy gunshots.

When our correspondent visited the scene, bonfires made with disused tyres and other objects were seen at various points on Ikot Ekpene Road, just as the police van was still on fire under the downpour.

Gunshots were pouring like rain from the military checkpoint and heard from afar probably to warn the protesters of the danger of going too close when the tension got too high.

The youth further erected barricade on Ehere, Umuola and Ukaegbu roads as they paraded the body publicly.

At 6.15p.m., a contingent of mobile policemen was seen at a strategic area of the Opobo Junction as people hurried home to avoid being caught in the web.

The police were later joined by a convoy of military vans, who arrested some of the protesting youths.

Efforts to reach the Assistant Director, Army Public Relations, 14 Brigade, Ohafia, Major Kadiri Aliu, were not successful as he refused to pick his calls nor respond to messages sent to his mobile number.