The loquacious and narcissistic Aisha Muhammadu Buhari is in the news again. Basking from the euphoria that greeted the notoriety of her previous outbursts, Mrs Buhari is gradually walking the periphery of nuisance to the alleyway of jebs.

She is giving irredentists fuel for their angst towards her husband’s regime and forcing discerning minds to fact-check her double-entendre. We remember that in 2015 while Buhari was waiting for his boka to exorcise Jonathan’s Villa, Aisha hurriedly packed in.

Mrs Buhari is the opposite of Sai Baba’s fake ascetism.  Her sartorial appearance is an album of arrogance and wanton display of opulence. She took a pot shot at her husband while he was convalescing in London, because she was eager to hijack the Presidency if the so-called cabal had let her.

She loudly called out the Permanent Secretary of the State House with complaints about capital projects at the Aso Clinic arguing that the existing structure lacked basic analgesics.

The criticism was packaged to look like altruism until one realizes that a fully equipped Aso Clinic brings additional unqualified privilege for the over pampered First Family and not the welfare of the citizenry.

It wouldn’t have stopped Muhammadu Buhari from his exclusive health tourism because he later explained his long obsession with his London doctor from way back when he was petroleum minister.

By Buhari’s admittance, he is the archetypal hypocrite who in 1993 while maintaining consultation with his London physician lamented that the nation’s hospitals were mere consulting clinics.

Four years under his watch, those same hospitals consult only rats and cockroaches. Citizens don’t even trust their dead relatives with its morgues.

Mrs Buhari’s next verbal punch was a fake threat not to campaign for her husband’s second term except things change in consonance with his electoral slogan. Change has yet to happen to anyone outside the coterie of the yes group in the Villa.

Mrs Buhari ate her words and vigorously campaigned for her husband’s re-election making sure her ballot box was within eyeshot of his zebra neck. Already, she has benefited from Umra, smiling all the way back like a Naijabet lottery winner.

While Mr Buhari claims to be austere and indigent, Mrs Buhari’s wardrobe, according to the fashion police could eradicate the poverty in Katsina and Adamawa combined.

Truth is, Mrs Buhari knows how to gain and maintain cheap popularity while enjoying mouth-watering state opulence. When the time came for projects, she went to Katsina and Adamawa. Aisha qualifies for a medal as the nation’s false wailer-in-chief, a position that undermines her husband’s talakawa goodwill and remains a national embarrassment.

With no constitutional role, Aisha is the archetypal hypocritical mourner crying more than the bereaved because she lives on taxpayer’s goodwill. We, the people pick her tab and she should stop ridiculing millions of the poor outside her husband’s misanthropic policies and alienated from privilege.

Her frequent outbursts expose a power hungry woman who wants ministers to pick her brains on project implementation so that she could take her slash of nepotism to her home.

Our abused constitution doesn’t support that and she needs to read Michelle Obama’s White House memoirs – Becoming. Her first outburst seemed expedient and cautionary and could have been interpreted as the wailing of a concerned wife.

But under her nose, Yusuf her son crashed an expensive motorcycle pursuing a dangerous hobby that is antithetical to his father’s claim to frugality. Buhari blamed his son’s lack of self-control on the inability of security details to prevent him from endangering his own life.

Those details would have been penalized under a regime that binges on official sycophancy. Yusuf was evacuated to Germany to be treated like his father – at public expense.

His wealthy mother did not pick the tab. Indigent children die from real accidents trying to live. The Buhari family are a curious bunch. Aisha, the wealthy tycoon did not put her abundance to work when her husband was raising funds from indigent people to purchase his nomination form.

The money she has ‘donated’ to charity shows she could have gifted that form as her contribution to her husband’s ambition, but she didn’t. In her beloved state of Adamawa, which she now wants primed for poverty-alleviation projects, she reportedly positioned her own brother as a frontline candidate and went ballistic when the party did not handpick him demanding the annulment of the entire process. Here is nepotism united.

I am for the emancipation of northern women from the backward claws of patriarchy but not at the risk of sacrificing propriety. Mai gaskiya needs to work on his domestic front. It is a disaster to entrust apex national responsibility to anyone incapable of maintaining domestic entente.

The presidency is not a spousal joint ticket. Spouses exert quiet influence at home, not blatantly undermining their significant half in public. If Mrs Buhari thinks she has political pedigree, she should pick a form and contest or lobby her hubby to include her on the next ministerial list to test her feet in political waters. Barring that, she should in Buhari-speak work from the kitchen, the sitting room and the other room where she is confined 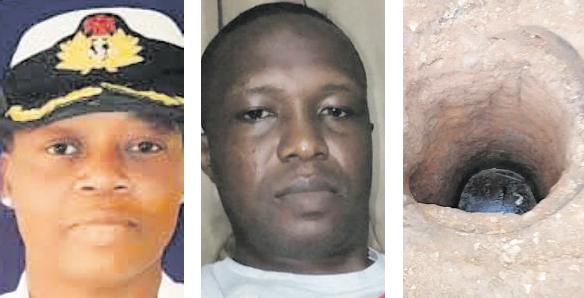 Navy Commander’s murder was planned in a church