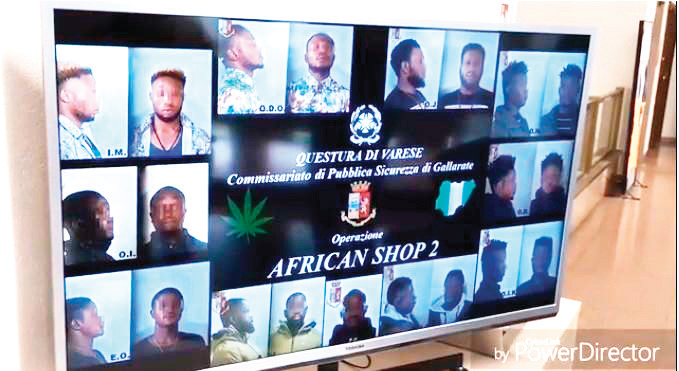 Police detectives in Italy have arrested 10 Nigerians for allegedly dealing and selling marijuana on the streets of Gallarate city.
The suspects, who were asylum seekers, were allegedly arrested by the policemen in the act of selling the drugs in the street.

According to www.national helm.com, the suspects, between ages between 21 and 32, were arrested over the weekend with other African asylum seekers. This was after an investigative team of officers led by the deputy prosecutor, Nadia Calcaterra, went on patrol of the city.

The investigation includes the use of video recording and analysis of telephone records, identified methods used by the suspects to keep the marijuana and how they sell them on the streets.

Calcaterra, in December 2017, said that a survey activity called, “African shop” was completed by the police, which led to the arrest of seven African drug dealers, including Nigerians.

Calcaterra disclosed that another operation, codenamed, “African shop 2,” was launched and another blow was struck against the drug dealing organisation. The organisation is said to be operated by Nigerians.
According to the report, those who are found guilty after investigations are concluded will be deported from Italy.

In a related issue, about 9,824 people were arrested for drug-related offences at various ports and border posts across the country in 2018.

The National Bureau of Statistics (NBS) disclosed this in Drug Seizure and Arrest Statistics for 2018 posted on its website.

The bureau, according to the News Agency of Nigeria (NAN), said 9,122 of the suspects were males while 702 were females.

In addition, the report said that 316,365kg of drugs was seized by the National Drug and Law Enforcement Agency (NDLEA).
It also said that a total of 271,812kg of cannabis, also known as marijuana, was seized in the year.

According to the report, this represents 85.9 per cent of the total drug seized within the period under review.

It added that Tramadol followed closely with 22,562kg seized representing 7.1 per cent of the total drug seized.