President Muhammadu Buhari appears to have been appointed as a special ambassador to Indian social media site Koo, with the app promising to give “exclusive updates from him only on Koo App!”

In June, the app Koo, which is comparable to Twitter, was released in Nigeria. This came shortly after the Nigerian government imposed a ban on Twitter and its operations in the country.

President Muhammadu Buhari threatened to punish regional secessionists in the country’s South-East area in a tweet that was removed by Twitter two days later.

According to the federal government, all social media platforms functioning in Nigeria must now be registered as a corporate entity in the country. One of the preconditions for the lifting of the Twitter ban was that the same condition be met.

Since then, the Indian microblogging site has moved in to capitalize on the trend, preparing to open a physical presence in Nigeria and engage with key influencers.

“@kooindia is available in Nigeria. We’re thinking of enabling the local languages there too. What say?”

Within days after the Twitter suspension, Koo was accessible in the Apple and Google app stores, and employment openings for local language speakers were advertised on LinkedIn.

The circumstances surrounding Koo’s launch to Nigeria are identical to those surrounding its introduction to its home market. 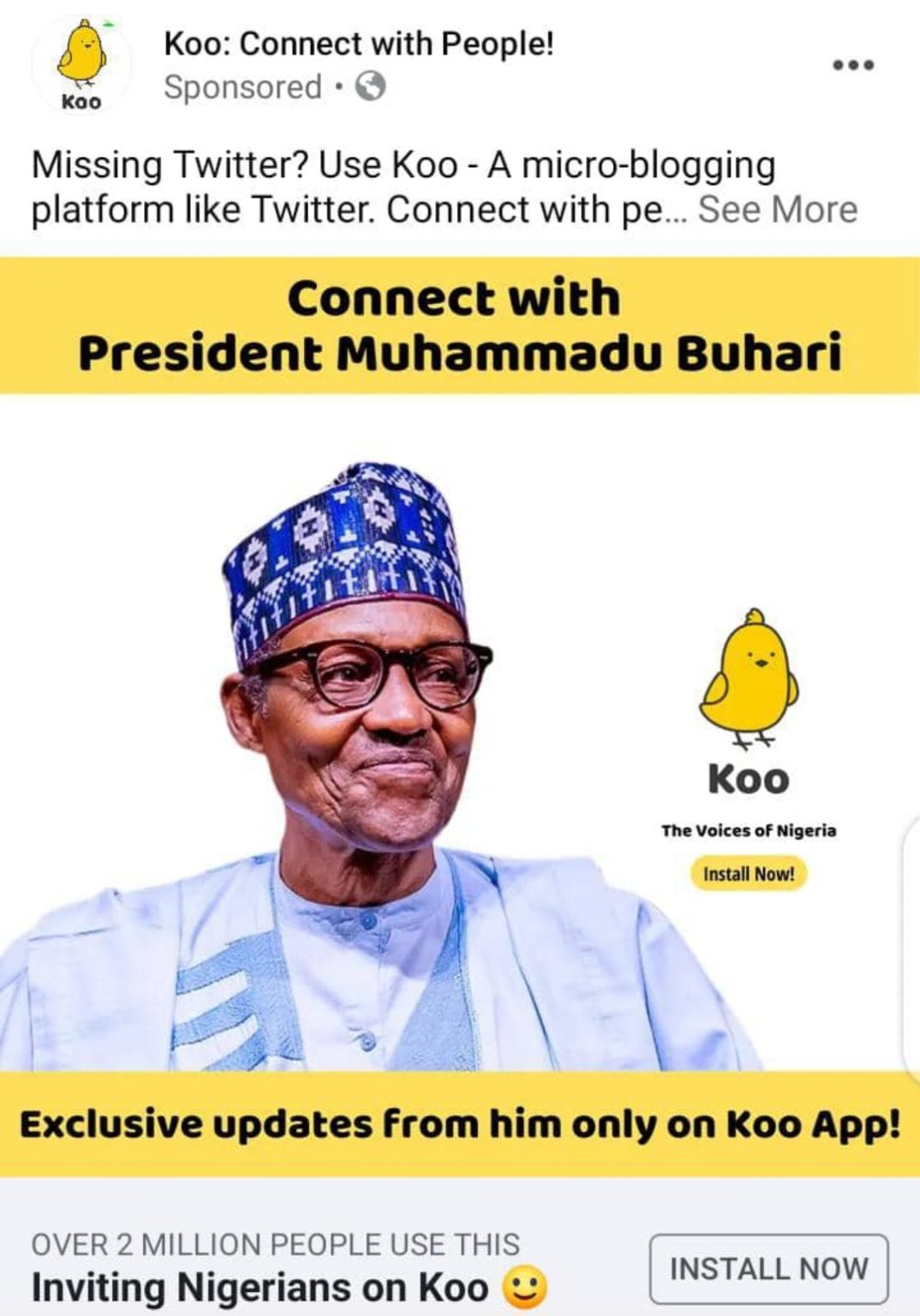 Thousands of farmers began protesting three unpopular agricultural legislation once Koo was introduced, and many others resorted to Twitter to express their displeasure. The Indian government has ordered that Twitter remove accounts belonging to various news organizations and political parties, claiming that they are propagating false information.

Because the Prime Minister Modi-led government did not accept Twitter’s outspoken support for freedom of expression, Koo positioned itself as a government-friendly alternative. As a result, it became a platform for spreading anti-Muslim propaganda and hate speech.

In Nigeria, the Buhari-led administration has been loud about their goal to impose control over social media, which has been widely utilized by activists and opposition groups to question government narratives.

Under the pretense of combating “misinformation,” Nigeria’s ministry of information and culture has enforced increasingly strict controls.

The current advertisement featuring Mr Buhari as the face of Koo in Nigeria has been slammed by the Center for Democracy and Development (CDD), a civic society organization.

“Its a shame the #TwitterBan has persisted till now, despite the economic disaster it has proven to be for youths who depend on #twitter for their livelihoods.

For obvious reasons, we find this ad by #koo, another microblogging platform, both immoral and distasteful.