Usain Bolt, Jamaica’s Olympic sprint legend, has surprised fans with the announcement that he has welcomed the arrival of twins — two boys — with Kasi Bennett, his partner.

The Olympic gold medalist broke the news via his social media handles on Sunday to mark Father’s Day celebration.

The Jamaican retired athlete, widely considered to be the greatest sprinter of all time, also announced the names of their newborn babies as Saint Leo Bolt and Thunder Bolt.

The 34-year-old, who holds the world record in the 100m, 200m and 4×100 meters relay, accompanied the post with a photo shoot of his growing family.

,” the retired sprinter captioned the photo. 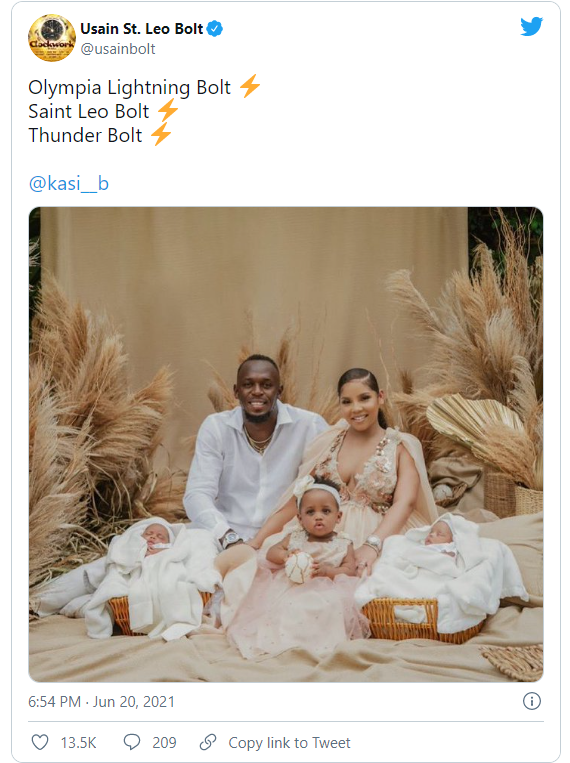 Bennett, a 30-year-old business woman, also posted a photo on her Instagram page with her three kids.

She described Bolt as the “greatest daddy” while wishing him a happy Father’s Day.

The Bolt family seemed to have kept the pregnancy and birth away from fans and the media only to announce their new additions while celebrating Father’s Day.

Bolt and Bennett welcomed their first daughter in May 2020.

#TokyoOlympic2020: D’Tigers Crash Out Of Tokyo 2020 Games After Defeat To Italy

I was disvirgined by a prostitute - Sammie

Hushpuppi to be sentenced in October –US court

[OPINION] Democracy is not just a game of numbers - Tonnie Iredia

Nobody can disqualify APC’s presidential candidate in 2023 - Omo-Agege

[OPINION] In 2003, south-east voted for Obasanjo against Ojukwu – why? - Fredrick Nwabufo

Finding Out About Your Death Was The Worst News Imaginable — Wife Of Usifo Ataga, Super TV CEO Mourns At...

BBNaija2021: My Mother Had Me At 16 - Angel Makes Stunning Revelation

Britain To Assist Nigeria In Fight Against Terrorism – Johnson

2023: Kalu urges INEC to conduct all polls in one day