There was a drama, on Tuesday night, as the Chairman of Nigeria Bar Association, Makurdi chapter, Justin Gbagir, was allegedly beaten up by operatives of the Economic Financial Crimes Commission (EFCC).

Gbagir who is recuperating at the State University Teaching Hospital, Makurdi told newsmen, on Wednesday, that he was beaten up in the presence of the Head of Office of the commission, Oseni Kassim.

While narrating how the incident happened, the NBA chairman said he had visited the office of the anti-graft commission, on Tuesday evening, to intervene in the release of one of his members, Mrs Ave Shima who was detained by the commission.

Gbagir said he was informed that Mrs Ashima, a law officer with the Ministry of Justice and assigned to give legal services to the State Universal Basic Education Board was detained when she went with the officials of SUBEB to the commission’s office.

He added that as soon as he was informed, he rushed to the EFCC office, adding that some colleagues were with him but were not allowed to enter until the arrival of the State Attorney General, Michael Gusa and Solicitor General.

“As we entered (the office of the EFCC zonal office), the Solicitor General introduced me to the EFCC Head that I am the Chairman, NBA Makurdi Branch and offered his seat to me. And as I made to sit down, the EFCC Head, (Oseni Kassim) said I cannot sit down because I am “an agitator.”

Gbagir said he queried the decision to keep him standing and made it clear that since he was not an accused he would leave. 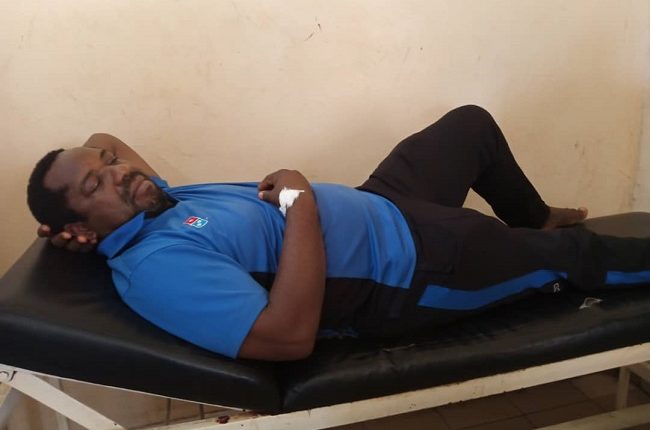 He said, “As I made to leave, the personnel of EFCC numbering between seven and above pounced on me and started beating me. They broke my recommended eyeglasses in the process and pushed me out of the premises.

“Infuriated (by the action), the Attorney General, Solicitor General and SSA to the Governor on Legal Matters also walked out of the premises and met us with other lawyers including the Director of Public Prosecution who were outside that we should leave.

“I then decided to come to BSUTH where I was admitted and is receiving treatment. I slept off after the hospital administered several injections to relieve the pains and woke up in the early hours of today (Tuesday).

“Meanwhile, I am still having serious bodily pains around my neck, left eye, waist and on my right and left hand.”

However, the anti-graft commission, in an unsigned statement posted on the platform of the EFCC in the state denied the allegation.

The Information Officer at the office, Adebayo Adeniran said, “You people should wait and get a formal press release from the EFCC spokesperson in Abuja, Wilson Uwujaren.”

“I have carried out an investigation into the allegation that the NBA chairman, Makurdi branch was beaten, it is not true.”

Alleged sexual assault: Baba Ijesha to be arraigned on June 24

Don’t mention unknown gunmen to me, they are not spirits – Gov LaLong to Police

No school is safe until govt negotiates with bandits - Gumi

My faith in young generation is unshakable — Aisha Buhari

Buhari’s borrowing, not a sin - Fashola

[OPINION] Dear Nigeria: What To Understand About Gender Based Violence? Lessons For Federal, State And Local Governments - John E....

Many escape death as Truck falls off Oshodi Bridge

Buhari has accepted dialogue to address agitations in south-east - Ngige

Why We Hiked Tuition Fees In Kaduna – Commissioner of Education

Nigeria to save $156m on Maritime insurance