“A first-class graduate of mathematics tilling the soil?” “This nation just has a way of sacrificing its best.” “Nigeria will break you.”

These were some of the responses to TheCable’s first story on Emmanuel Nworie, a first-class graduate of mathematics from the University of Nigeria, Nsukka (UNN). Michael Taiwo, a US-based Nigerian and sponsor of MT Scholarships, alongside Suraj Oyewale, founder of JarusHub, a career and education platform, were the ones who first drew attention to Nworie, a golden ornament hidden under the rubble.

Despite the laurels, commendations and respect Nworie’s sterling academic record has fetched him, life is still a tough battle. The demise of his father was a big blow on him and his family. However, the COVID-19 pandemic made it worse, leaving him with no choice than to go back to farming. With weeks stretching into months, his struggles seem endless. Nevertheless, he keeps hope alive that one day, fortune would smile on him. In this interview with TheCable, Nworie shares the bittersweet experiences of his life and why he is determined to push harder.

What has been the response since the first story published on TheCable?

Nworie: People have reached out to me, individuals and organisations and they have made some offers. But I am just being careful because you know we are in a country where everything is politicised. I have been encouraged to write GRE exams. But none of them has promised me scholarship. Some said they will add me to a group while some said they will mentor me. Somebody from outside Nigeria is willing to help with money for GRE. I have also got two job offers in Port Harcourt and Lagos.

You graduated from secondary school in 2008 at age 15. What was the immediate plan you had after?

Nworie: I have long wanted to be a mathematician. But after my dad passed away, I was deterred because at some point when I was trying to save for undergraduate studies and after two years I couldn’t save enough, so I was frustrated. As a secondary graduate, I couldn’t get a place to be paid enough for me to save for further education.

I started having challenges in 2005 when we struggled with the health of my dad. He gave up in January 2009. He was a classroom teacher and the breadwinner of our family. So I had to start looking for something else to help the family. 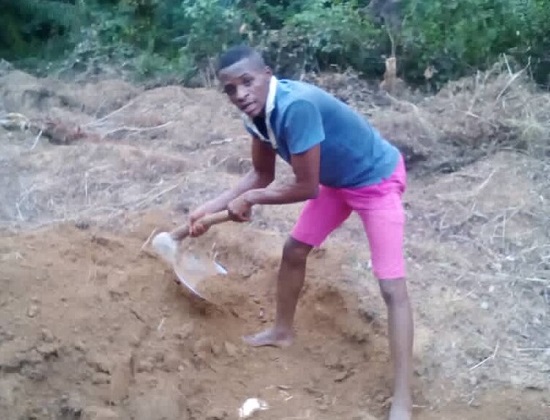 Harvesting cassava at the family farm where he sometimes spends five hours a day.

I had to teach so we could raise money, my mum had to farm. It was a setback but it didn’t stop the dream.

After secondary education, I took a job in the same secondary school where I finished and I worked there from 2008 to 2012. My pay was N5,500. I was there while my father passed away after suffering from diabetes and hypertension.

Your dad was a mathematics teacher, did he influence your love for mathematics?

Nworie: He contributed somehow when he was alive because there were times he helped with my homework while I was in primary school. But then it wasn’t fully. When I was 10 years, I was thinking of becoming a barrister. But when I got to SS1, I started noticing my interest in mathematics so I felt I would do better there. 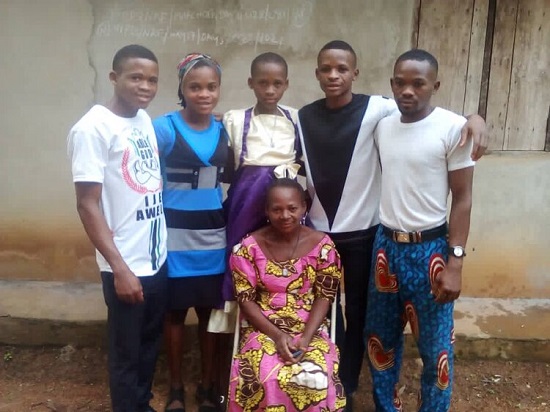 Emmanuel (2nd from right) with his mother (center, front) and four of his seven siblings; their house is in the background.

At that time I didn’t really know where a mathematician would work but I just enjoyed solving mathematics. Even at that point, I was still indecisive until 2008 when I came out top in a cowbell mathematics competition in my state.

In 2011, you became best mathematics Olympiad teacher in Ebonyi state. How did you feel about the award?

Nworie: A student I taught came out top in the competition so I was rewarded as the teacher. It was a three-year effort the contributed to that.

So when did you decide to quit the teaching job?

Nworie: If I had saved enough money the way I wanted, I would have applied to the university directly. But I had to change to polytechnic because I knew that I would be able to work during my one year internship programme and save money before proceeding with my HND.

But Akanu Ibiam federal polytechnic which I gained admission to in 2012 didn’t offer Mathematics. They offered me Statistics. I graduated with a distinction from the OND programme in 2015 — after series of strikes. 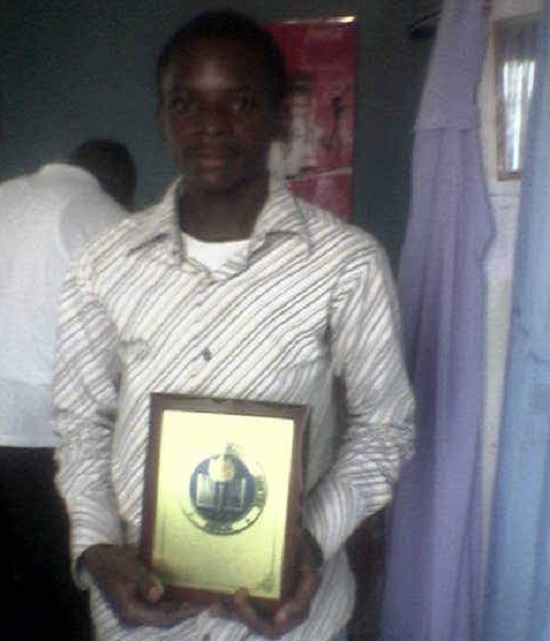 After your OND programme, what was the next thing?

Nworie: After that, I moved to Abakaliki (capital of Ebonyi) and I taught in another school; that was from February till December 2015. I was paid N11,000. Rather than continue with statistics, I felt a focus on mathematics will lead to better fulfilment. I applied for mathematics at the University of Nigeria, Nsukka, and gained admission through direct entry. This was seven years after graduating from secondary school. I spent four years at home after leaving secondary school, two years in the polytechnic and one year for internship.

What was the feeling like when you gained admission into UNN seven years after leaving secondary school?

Nworie: I was kind of happy that I was going to study mathematics but I was also worried about how I would sort my bills knowing that the savings would not take me all through. My mum had to borrow so we merged the money.

When I gained admission, there was a policy that we had to own a laptop. Since I had no choice, I took it and paid in installment. They made it N70,000 if we were to pay at once but those of us who didn’t have full payment were given the option of three-year installment, which is N25,000 per year.

How did you survive while in UNN?

Nworie: I had no choice but to squat. So l squatted during my stay in school and feeding was not too much of a problem, coming from a family that knows how to make garri (a Nigerian staple). So I used to go home, get garri and return to school. 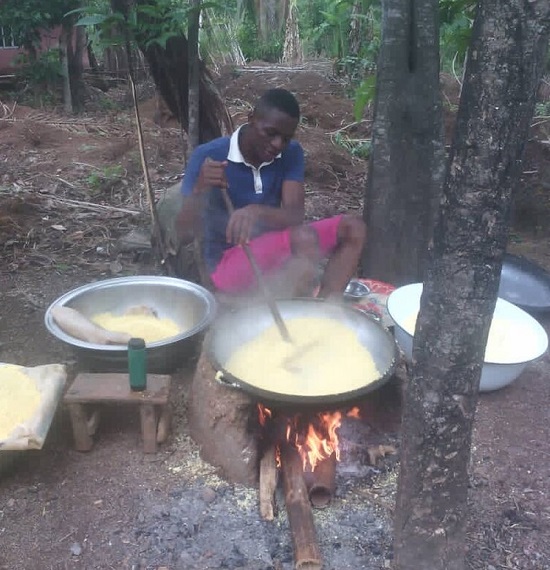 How did you get to know about the national mathematics competition?

Nworie: My school got to know about it in 2017 when I was in my third year. So they asked me to join the final-year students in preparing for it. In my final year (2018), I contested and won.

When you gained admission to UNN, were you confident that you would graduate with a first-class degree?

Nworie: Where I come from, there is a kind of feeling they have about academics because we haven’t had people go into it and conquer. So there were many people looking up to me and I didn’t want to disappoint them. Going to the polytechnic, I planned to make a 4.0 but since it didn’t pan out the way, I aimed for a 5.0 at the university.

After meeting expectation of people and setting a good academic standard,  how did you feel?

Nworie: I came out top in my department and faculty. I came second best graduating student in the university. My community people were very happy. 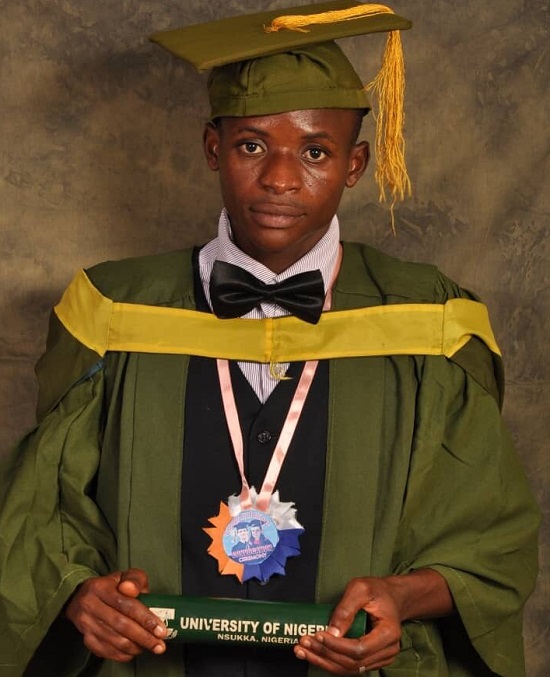 Nworie in search of a golden opportunity

What was your expectation regarding jobs after school?

Nworie: I knew we are in a country where a 5.0 can’t guarantee you a job. But I was determined that I would move further with my education. However, I needed money to pursue postgraduate studies but the funding wasn’t there. I was also looking for scholarship opportunities, I applied for some but I was unable to secure any.

My expectation was that UNN would give me an opportunity to come back, stay with them and contribute to their research development but I was turned down after NYSC. I later got job at a school but during the coronavirus period, the school was shut down and there was no way to survive. So, I had to go back to the village to help my mum with planting on the farm. We farm to feed ourselves. We plant cassava, yam, etc. We engage in subsistence farming and some, I spend up to five hours on the farm. 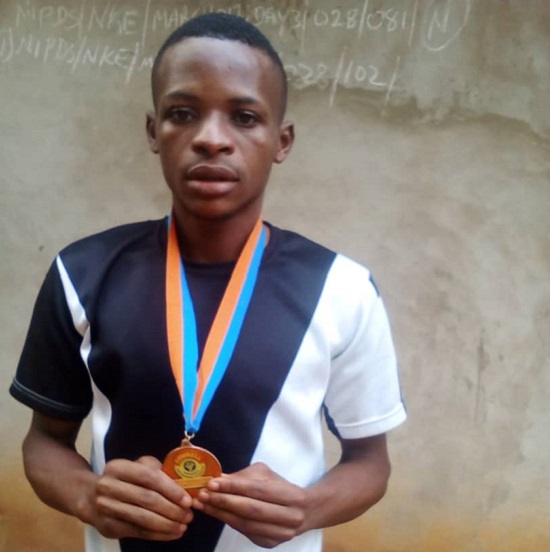 TheCable: What do you consider as your most disappointing moment in life?

Nworie: Everyone that worked as I did, spent some night in class, days in school and when it actually paid off, I expected that I would be asked to stay back but after returning to the institution, I was turned down. It pained me so much; I felt disappointed.

And back home, no network or electricity. You have to trek a long mile to make calls or browse the internet. Sometimes, you have to go to the next local government to charge your phone.

Aside UNN, which other jobs did you apply for?

Nworie: I applied for an opening at MTN but they said my certificate is better off in the academic sector and not in the telecommunication sector. I also applied at Federal University of Petroleum Resources, Effurun (FUPRE), but up till now, I have not got any response. There are some other jobs I applied for but there has been no response till now.

What do you want to achieve?

Nworie: I believe that there are a lot of things we can do with maths. I intend to apply my maths into data analysis and machine learning. But if I see the opportunity to lecture, I will take it. I would want to go abroad but the funding isn’t there yet. I can only hope for a fully-funded scholarship. I applied for Commonwealth scholarship last year but they said I should send an email to a nominating body in Nigeria. So I sent an email to the federal scholarship board, asking them to nominate me for the scholarship. I sent all the necessary things. But up till now, I didn’t get any response and my application was dropped. I want to put my mathematics to use but there is no platform to help me achieve that yet.