Angry youths on Saturday evening disguised as EndSARS protesters and broke into the Taraba state Covid-19 warehouse and carted away food palliatives stored in the warehouse.

Tribune Online reports that the residents of Jalingo took advantage of development as citizens numbering over 2,000 trooped into the premises of the warehouse to get their share. 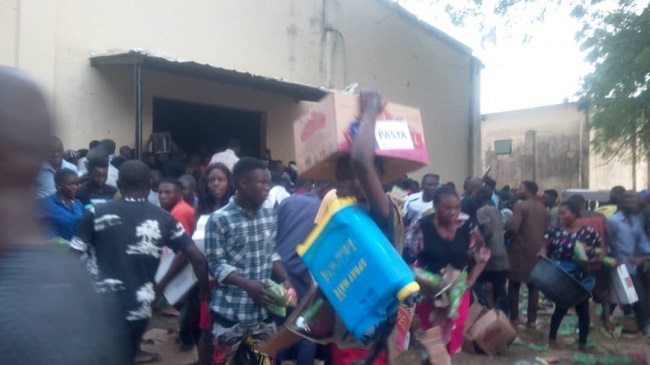 Tribune Online also reports that men of the Nigeria Police Force who went there could not prevent the angry youths from their action due to the overwhelming crowd.

Findings revealed that the angry youths went on the rampage in protest of the state government’s negligence of the people, as well as the unbearable hunger in the state.

It was also gathered that the looted palliatives were brought to the state between May and August 2020.

End SARS: No one was killed at Lekki toll gate – Gen Buratai

[Book Review] “Two Decades of Forensic Advocacy at The Inner Bar: A Festschrift in Honour of Yusuf Ali,...

PHOTOS: “Two Decades of Forensic Advocacy at The Inner Bar: A Festrchrift in Honour of Yusuf Alli, SAN,

2023: It’s too early – Goodluck Jonathan speaks on return as president

How we were shot at Lekki Tollgate –#EndSARS protest victims

We Won’t Allow Reckless Use Of Social Media – Lai Mohammed

Customs Officer Missing After Attack On Patrol Team In Ogun

Pensioners fume as govs back plan to borrow N17tn from pension funds, others

Maina Is Not Trustworthy, I’m withdrawing my surety for him — Ndume

Man dies mysteriously after stabbing co-tenant to death in Osun

Youth must be commended for holding End SARS protest – Aregbesola

Maina To Remain In Prison Till Trial Ends

My wife, family planning to poison me over properties – Duncan Mighty

Maina Back In Court For Trial After Extradition From Niger