Buhari stated that the death of 23 people, as confirmed by the Federal Road Safety Commission, “represented another disturbing and saddening incident in the litany of tragedies that have befallen our country.” 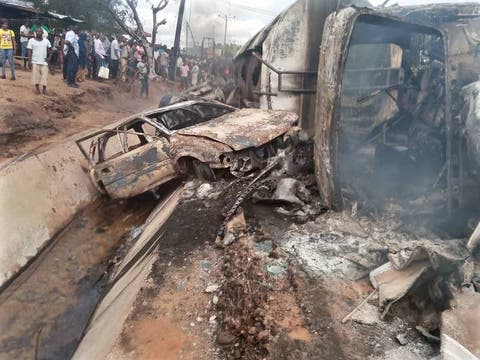 Reacting to the petroleum tanker explosion earlier this Wednesday in Lokoja, the Kogi State Capital which claimed the lives of travellers, school children, bystanders, including some students of Kogi State Polytechnic, Buhari said that “I am seriously worried about the frequency of these unfortunate and large scale tragedies in the country which cause needless deaths.”

According to him, “these frequent incidents that result in loss of lives and property are a national scandal caused by our indifference to safety standards.”

He explained that “many accidents are preventable if proper proactive and precautionary measures are put in place or properly observed as routine policies.”

The President regretted that “ours is a country where we move on whenever tragedies occur instead of taking preventive safety measures to forestall future calamities.”

Buhari called on the county’s transport authorities, traffic and road management agencies as well as law enforcement officials to sit up and enforce safety standards with more seriousness, adding that “refusal to do the right thing can cause potential tragic problems that harm innocent people.”

He condoled with Kogi State government and the families of the victims of the tragedy.