Mojisola Odegbami did not anticipate that a trip to the United States would land her a part in a visual album by one of the most popular music artists in the world -- Beyoncé.

The 69-year-old Nigerian grandmother appeared in two music videos in Beyoncé's highly anticipated "Black Is King" album, which premiered on Disney+ on Friday. 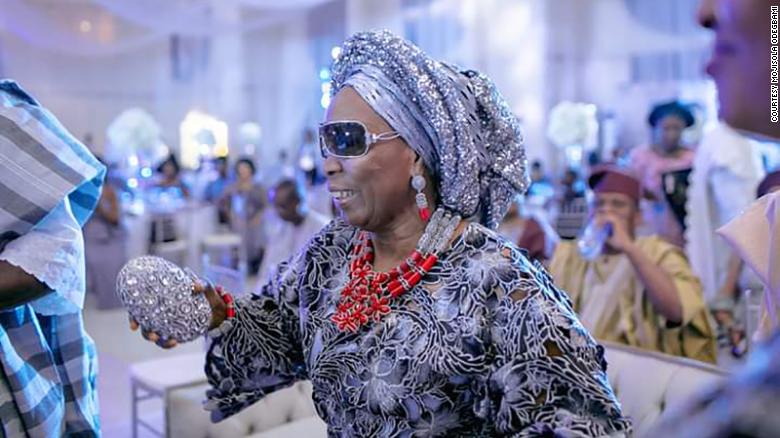 Mojisola Odegbami got a role in "Black Is King" in July 2019.
The album is based on the singer's soundtrack album, "The Lion King: The Gift," which was created for the 2019 remake of the original Disney film "The Lion King."
In a video, speaking about the release of the album, Beyoncé said the goal of the project is to show that "black is regal and rich in history, in purpose and in lineage."
Multiple African artists including Nigeria's Yemi Alade, Ghana's Shatta Wale and Cameroon's Salatiel also appeared in the almost 90-minute album.
Odegbami appeared in "Bigger" taking on the role of an African queen, and in "Mood 4 Eva" where she was dressed in African attire, including a gele, a traditional head wrap commonly worn in West and Southern Africa.
She told CNN that her journey to being cast began with a medical trip to California in July 2019, where she met Folajomi "FJ" Akinmurele, a young actor. "I was staying with my daughter's friend, and this friend of hers has a 7-year-old son. The son, FJ, is the main character in "Black Is King," Odegbami explained.
"Each time he needed to go for practice, I was the one who drove him there cause his mum would have gone to work. At that point, Beyoncé's staff got to know me as grandma Moji," she added.

Participating in 'Black Is King'

Even though Beyoncé's staff knew Odegbami, she did not get invited to cast in the album until her daughter's friend took a leap and signed her up with the talent agency responsible for choosing characters for the album.
"I was out shopping one day and she called me, and asked that I come home immediately. I was scared, you know. She said "Grandma, it's very important I need you to please come back home," she said.
When Odegbami got home that afternoon, she said her daughter's friend confessed to signing her up for a part on the album.
"That was how I found myself on the way to L.A .that same day for a part in the album. I initially didn't want to go but she kept begging me, so I agreed," she said.
After a two-hour drive to the set of "Black Is King," in Los Angeles, she was ushered in by Beyoncé's staff and given instructions on scenarios to act.
She was tested with fun parts to play like receiving a baby, holding it, and putting a mark on the baby's forehead. "I was just having fun, you know. Everything was going on smoothly, playing those parts I was asked to," she said.
Right after acting out the scenarios, Odegbami said everything happened fast. She was told she would be featuring in the album and meeting Beyoncé.

Cameras and phones were not allowed on set so she did not get photos of her with the Grammy-winning singer, she said.
Odegbami also was required to sign a nondisclosure agreement, preventing her from revealing details of the video shoot to the public until after the album was released.
"They dressed me up, did my makeup, and chose outfits for me. And then they showed me where to stand on set waiting for Beyoncé," she explained.

What an incredible opportunity! I am on @goodmorningamerica!!! Thank you my daughter @mojidodo and my son Sam of @afritalent_agency and special thanks to @beyonce

The team was able to guess her size correctly from photos and videos her daughter's friend had sent to them, she said.
In a scene in the "Mood 4 Eva" video featuring Jay Z, Childish Gambino, and Malian singer Oumou Sangaré, Odegbami was seated directly at Beyoncé's back, dressed in a colorful pink dress with a cape.
She also wore dark shades, and purple gloves matching her extravagant gele.
And the "Better" video featured her dressed in all-white while walking behind Beyoncé and FJ.

Odegbami said meeting Beyoncé was a wonderful experience. Everyone on set, she said, was receptive and kind.
"I mean before that day I knew there was a singer called Beyoncé, but I had never seen her. My children are her fans. In fact, my last born is always referred to as the Beyoncé of our family. Her siblings call her that," she said.
She added that like her children, she is now a fan of the singer.
Odegbami, who lives in Abeokuta, southwest Nigeria, told CNN that she feels happy to have represented Nigeria, and by extension Africa, in "Black Is King."
It was an opportunity to showcase Nigerian culture through her appearance, she said.
"I give credit to my daughter's friend who saw me fit to represent our culture. She didn't even know what I was going to do on set, she just felt I'd be a right fit to appear in the album," she said.  | src: CNN

Only states, local govt can help Nigerians not FG — Fashola

Why Nigeria can no longer break up – Keyamo

[email protected]: Check Out The Incredible Way This Nigerian Woman is Celebrating

NigeriaAt60: It makes no sense to sell fuel cheaper than Saudi Arabia ― Buhari

[OPINION] Nigeria and the Class of ‘60 - Olusegun Adeniyi

‘I killed 50 kidnap victims because they could not pay ransom’

Nigeria @60: Time to invest in our youths is now - Atiku

How my mum died on my father's birthday - Davido reveals

WHO okays emergency use of China’s COVID-19 vaccine