Adams Oshiomhole, former national chairman of the All Progressives Congress (APC), is back in the news for chewing corn on the streets.

In 2016, the then governor of Edo was the talk of the town when alongside Godwin Obaseki, his successor, he patronised a roadside corn seller.

Both men chewed roasted corn publicly and smiled for the cameras.

However, when the “comrade governor” returned to the streets four years after, he was without his companion in 2016, who has decamped to the Peoples Democratic Party (PDP) following his disqualification from the APC governorship race. 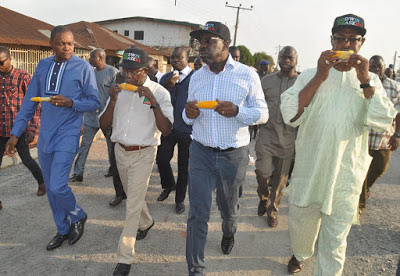 Will the corn ‘magic’ work this time around?

In a video, Oshiomhole was seen standing in front of a roadside corn seller as some passersby circled him, chanting: “Osho baba!”

Shortly after paying for the corn, the politician who neither wore a mask nor maintained social distance, had a taste of the corn while the praise singers cheered him on.

It is not clear when or where the event took place but the video is currently trending online.

Oshiomhole is now campaigning for Osagie Ize-Iyamu who was Obaseki’s opponent in 2016.

On Monday, he appologised to the people of Edo for selling a bad product to them in 2016.

The governorship election is slated for September 19.

Below is the video:

- Edo state Residents sing in joyful praises as Oshiomhole hit the street to buy roasted corn from a road side corn seller.

311 Nigerians Arrive In Abuja From UAE

El-Rufai reveals region that should produce next president in 2023

Pharmacist dies during sex romp with prostitute in Lagos brothel

In Defence of Democracy: Full statement of Tinubu on Edo Assembly

Edo is now Syria. Obaseki is Assad while Jagaban is Nathanyahu - Shehu Sani

Nobody Can Stop Obaseki, Not Even Buhari Or Oshiomhole – Nehikhare

Edo election: I sympathise with Buhari for endorsing Ize-Iyamu – Obaseki

We will resist plot to impeach Obaseki, rig election - Wike

No force can stop Tinubu in 2023 – APC chieftain

Boko Haram ordered me to renounce Christianity or be another Leah Sharibu – 28-year-old trader, shares her ordeal

You can’t stop power rotation until Igbo have their turn in 2023 –Ex-governor, Chukwuemeka Ezeife

What Edo Assembly Legislative Chamber Looks Like After Rooftop Removal

Another new virus on the rage in China