From left: Southampton professors Ratko Djukanovic, Donna Davies and Stephen Holgate, founded Synairgen decades ago after finding patients’ defences against viruses could be boosted if a missing protein were replaced.

Three professors at the University of Southampton school of medicine have this week made a “major breakthrough” in the treatment of coronavirus patients and become paper millionaires at the same time.

Almost two decades ago professors Ratko Djukanovic, Stephen Holgate and Donna Davies discovered that people with asthma and chronic lung disease lacked a protein called interferon beta, which helps fight off the common cold. They worked out that patients’ defences against viral infection could be boosted if the missing protein were replaced. 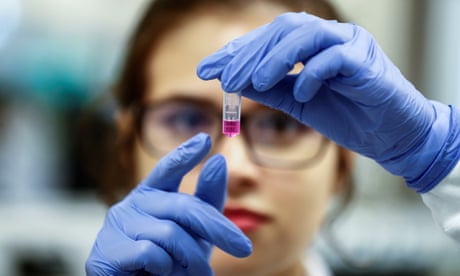 Experimental lung drug to be tested on UK coronavirus patients

The academics created a company, Synairgen, to turn their discoveries into treatments. It floated on the stock market in 2004, but a deal with AstraZeneca to treat viral infections in asthmatics fell through, and the shares collapsed.

Fast-forward a few years to the coronavirus pandemic, however, and suddenly any potential therapeutics for breathing difficulties were in high demand.

Richard Marsden, Synairgen’s chief executive, said the company had been deeply involved in a trial using the interferon beta drug to help people with chronic bronchitis or emphysema. “[But] when the coronavirus pandemic emerged, even back in January we realised that we might have an important role to play in defence against this virus,” he said. “So we set about getting a clinical trial set up in February and March in anticipation of the virus coming to the UK, [and] it did. The trial was in place when people started to fill the hospitals up.

“It is part of the coronavirus’s strategy to interfere with the immune system and suppress interferon beta, so if we can put it back in, we can have dramatic effect.”

Results of the initial trial, published this week, showed that coronavirus patients in hospital given a special formulation of the professors’ interferon beta drug, called SNG001, delivered directly to their airways via a nebuliser, were two to three times more likely to recover than those given a placebo.

The study of 101 people found that the odds of patients developing a severe version of the disease were reduced by 79%, and their breathlessness was also “markedly reduced”, the company said.

As soon as the clinical trial results were published, on the morning of 21 July, the shares spiked, and by lunchtime had risen by 540%. Djukanovic, aged 65, a professor of medicine, saw his 0.56% stake in the company jump in value in one day from about £300,000 to £1.6m. The 0.59% stake held by Holgate, 73, a professor of immunopharmacology, rose to £1.7m. It is understood that Davies, aged 67, the third founder and a professor of respiratory cell and molecular biology, holds a similar-sized stake through a separate company.

So far this year Synairgen’s shares have risen by more than 3,000%, to 204p at market close on Friday, valuing the company directors’ combined 2.6% stake at more than £7m.

Marsden, who holds 0.3% of the stock, described the share price reaction as “reasonable”. “It is a major breakthrough in the treatment of hospitalised Covid-19 patients,” he said. “We couldn’t have expected much better [trial] results than these.”

He said coronavirus had caused “financially a massive problem”, with global economies shutting down to slow the transmission of the virus. “If we’re successful then we would help people clinically, but they’d obviously be a very successful commercial product as well.”

He said it was difficult to work out how valuable the drug might be, but it could help restart more normal working conditions. “What is the economic impact of this virus in the world? If a drug is as effective as this data suggests it might be, this drug could be very valuable indeed,” he said. “Everyone uses the word ‘unprecedented’. We need a more powerful word than that.”

Marsden said the three scientists were excited about the economic prospects, but for them the real accolade was “to have been lucky enough to be the academics who have seen their discovery go all the way through to the marketplace”.

“That’s a very long shot,” he said. “[For them] it doesn’t get better than seeing a drug you created treating real patients, and the side-effect of that is you make money … If people are clever and find something useful, they should get rewarded economically,” he said.

Mark Brewer, an analyst at FinnCap, Synairgen’s house broker, said: “Valuing the Covid-19 opportunity is nigh on impossible; however, we upgrade our target price to 360p but recognise this could go substantially higher, based on upcoming discussions with regulators,”

While the founders have made a packet, long-suffering investors in Neil Woodford’s former flagship fund have missed out. Woodford, who was known for taking bets on early-stage medical stocks, had been one of the biggest single investors in Synairgen through his equity income fund. But the administrators sold the fund’s holdings in Synairgen last month for less than £10m, about a quarter of the value of the shares today.

Synairgen, which is still based at Southampton general hospital, is now presenting its findings to medical regulators around the world to seek approval for the next stage in bringing the treatment to market. New drug approval procedures often take months, but governments have promised to speed up the process to get promising coronavirus treatments approved.

The company has also expanded the trial to patients suffering from milder coronavirus infections at home. “It has surprised us how well it has worked in hospitalised patients,” Marsden said. “Now if we can give it to people early enough they might not ever get near hospital.”

Synairgen has already ordered the drug manufacturer Rentschler to start producing supplies, with the aim of getting more than a million doses ready for a possible second wave of coronavirus in the winter.

In the future the drug could be given to healthcare workers and vulnerable groups prior to a second wave of Covid-19 or another new virus.

“Imagine if we had done this work five years earlier, this drug could have been stockpiled by governments,” Marsden said. “And, when coronavirus emerged in Wuhan we could have given this to all healthcare workers and anyone exposed on cruise ships or elsewhere.”

‘Why Western Countries Refuse To Sell Weapons To Nigeria’

Man abducted as toddler 32 years ago reunited with parents

Until corrupt politicians get death sentence, voting should be abolished in Nigeria - Nollywood actress, Ruth Kadiri

‘You will be punished if you insult, President, Governors, Senators, others in Nigeria’