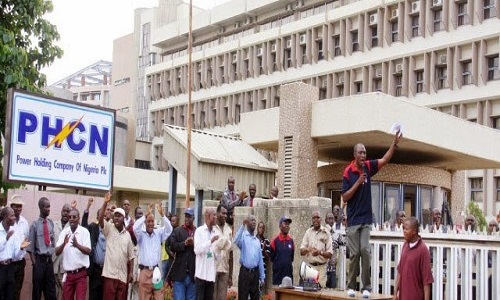 Nigerians heaved a sigh of relief on Thursday when electricity workers called off their two-day old strike after reaching an agreement with the Federal Government.

The strike  was already  taking a toll on businesses and public institutions in many cities. Osogbo, the Osun State capital was thrown into darkness as the workers shut down the National Control Centre (NCC),  before the National Union of Electricity Employees (NUEE) made the U-turn.

NUEE General Secretary Joe Ajaero who announced the suspension of the after a marathon meeting with the Minister of State for Power, Goddy Jedy-Agba,  and other representatives of the government, said all the issues raised by the union were addressed.

A communique at the end of the meeting which held at Reiz Continental in Abuja, quoted the government as saying that about N350 billion had  been paid to some workers of the defunct Power Holding Company of Nigeria.

President of NUEE, Martin Uzoegwu; Ajaero; Jedy-Agba; Director-General of the Bureau for Public Enterprises, Alex Okoh, and a representative of the Federal Ministry of Labour and Employment, Hosea Musa, signed the  communiqué.

In a statement, government promised to process the verification of 600 workers and forward   their  details to the office of the Accountant-General of the Federation for immediate  payment.

It said 200 former workers of  the  defunct Power Holding Company of Nigeria could not be verified.

The communiqué added: “On the issue of 16-month underpayment of severance benefits as well as the 7.5 per cent pension component, the Director-General, Bureau of Public Enterprises, Alex Okoh, acknowledged that this was pending and promised that modalities would be worked out on the payment.

“The DG- BPE promised to obtain the condition of service (CoS) from the GenCos and DisCos within a week and hand them over to the Minister of State for Power.

“The Minister of State for Power promised to visit the GenCos with the Managing Director of NELMCO, along with officials of NUEE  to see things for himself and resolve the issue of unionisation in the GenCos and the non-remittance of the deducted check-off dues.

“The meeting resolved that Discos/GenCos be advised to negotiate with their bankers to ensure sufficient cash flow to enable them pay salaries as at when due.

“DG BPE promised to intervene in  the non-remittance of Contributory Pension to PFAs especially for Kaduna, Kano and Jos.

“The meeting also resolved that the DisCos should be advised to stop casualisation of workers where it exists.

“The Minister of State for Power advised that DisCos and GenCos should be encouraged to renegotiate with their respective bankers on terms of repayment of loans secured so as to allow sufficient funds for staff salaries.

“The meeting resolved that all staff who participated in the industrial action should not be victimised in anyway.

“DG BPE explained that the pre-retirement training was processed but there was no cash backing to carry out the training.

“On 10 per cent equity, the DG, BPE explained that the percentage share has not been worked out because the 40 per cent is yet to be determined. On till then, staff can access their own share.

“In line with the above resolutions, the industrial action is hereby suspended.”

Some hours after the suspension of the strike, Ajaero led other executives of NUEE  to honour an invitation by the House of Representatives over the  demands of the electricity workers.

At the meeting which was presided over by Speaker Femi Gbajabiamila, were   the Minister of  Labour and Productivity, Chris Ngige and  Jedy-Agbo.

The meeting almost turned rancorous as Ngige and Ajaero openly disagreed over the legality of the suspended strike.

Ngige fired the first shot by saying that as a union in the essential service sector of the economy, it  should not have embarked on the  strike without  adequate contact with his ministry.

But Ajaero said NUEE gave the government adequate notice before commencing the strike.

Ngige said: “Let me say that I am highly displeased with what has happened. Electricity is an essential services and they know this. In Nigeria, it is number two after health. But outside Nigeria, it is even number one.

“If you withdraw your services abruptly, lives could be lost. The   law spelt out how you deal with services that are essential in nature. They should have done what is necessary and allow us to apprehend the situation.

“I did not find what happened funny at all. The whole economy was shut down and the nation thrown into darkness.

“They even locked the Minister of Power out of his office and forced other staff to run away from their duty posts in the name of picketing.

“Picketing is not to forcefully stop the minister from entering his office or prevent others from working.

“I want this to be the last time this will happen. If you write a letter and copied me, there is a limit to which I can act. They should have come back to me to say we have reached a brickwall with our employers. Even with a phone call, they could have reached me and I will apprehend this situation.

“The issues they raised have been there, but they are being addressed. My friends have offended me and they have to apologise to me.”

Ajaero said the union took exception to the minister’s use of the words abruptly and sudden withdrawal of service. He argued that a 21-day ultimatum which lasted one month could no longer be regarded as abrupt.

He called for a review of labour laws in the country to give the Minister of Labour what he called biting power.

“Right now, the minister of labour has teeth, but cannot bite,” the union leader said and went ahead to blame Ngige   for not taking steps to halt  the strike since  the law allows  him  to step into any matter  whenever   hears about it.

Gbajabiamila, assured the NUEE leadership that the agreement would be implemented.

A statement by Lanre Lasisi, the Special Adviser to the Speaker on Media and Publicity, reiterated that the leadership of the House was determined to ensure the implementation of the agreement.

The statement said: “From all indications, this matter will be resolved permanently.

“This issue has unintended consequences on Nigerians. Within the hours you were on strike, a lot of things may have happened. But they may not be reported.

We want to make sure that agreement a tripartite agreement and include the House of Representatives as part of it. We want to be part of the agreement as witnesses so that you can hold us accountable. That way, we’ll ensure that the government meets its part

In Osun State where a transmission station was shut by the union members, electricity supply was restored around 4pm on Thursday in Osogbo  and other communities in the state .

A staff of the transmission compan , who preferred annonymity, said the NUEE might have reason to resume another round of strike  if  government failed to implement the fresh deals.