Joshua won by unanimous decision as the three judges gave him the fight.

He is the heavyweight champion of the world once more!

The Mexican had knocked out Joshua in seventh round in June 2019 to claim the WBA, IBF and WBO titles, but a determined Joshua fought excellently well in Saudi Arabia to reclaim his titles from Ruiz.

Six months on from the night where Ruiz stunned boxing, Joshua risked his career being left in tatters with a second defeat but served up 36 minutes of movement and well-timed punching to take the IBF, WBA and WBO titles back to Britain.

After cutting his Mexican rival inside the first round he simply never looked back and picked out smart jabs and right hands throughout before being serenaded with chants of “AJ, AJ, AJ” by the 14,000 or so fans in the largely full Diriyah Arena.

Ruiz never looked close to landing a knockdown and when scores of 118-110 118-110 and 119-109 were read out, Joshua jumped up and down in the ring in celebration, just as the man who had wrecked his US debut did in June

An elated Joshua said after the fight that he remains humble in victory and also praised his opponent Ruiz, for being a great fighter.

“A man like me don’t make no excuses, my boy (Dereck) Chisora said I am ready to win this if I am ready to D.I.E. This is about boxing, I am used to knocking people out, but last time I got hurt, so I gave the man his credit, said I would correct myself again, I respect Andy so much.

“The sweet science of this sport is about hitting and not getting hit. Never a change in mentality, you know the saying ‘stay hungry, stay humble’ – I am hungry and I am humble.”

He added: “I said I didn’t want to get too carried away but it is emotional. This is about the public, and about British boxing. They won tonight and we created history by opening the floodgates.

“To Andy Ruiz and his family and team, love and respect and I want to see him in the ring again because he is very talented. l can box but I like to fight. I’m a warrior at heart, and sometimes when you’re used to knocking a man out, it can happen to you.

“I’m a man that has made mistakes and when I was on losing path in life, I matured and bounced back. After I took my loss I had to mature as a fighter. Life is in boxing and that is why I love it because they go hand in hand.”

“This is a purpose-built stadium for a purposeful night. Shout out to the travelling fans. I’m just appreciative of the journey and for the fans that witnessed history. It’s about everyone involved and I’m just humbled. I know certain people had doubts but I didn’t.

Here is a round-by-round analysis of the bout, courtesy of USA Today:

FIRST ROUND: Ruiz leading with jab. Joshua counters with his own jab. Ruiz looks a full 283 pounds — even without the sombrero. Not much action yet. Fighters carefully assessing. But Ruiz is the fighter moving foward, albeit measuredly. Joshua throws a right that lands. Joshua more active now. Joshua appears intent to box rather than brawl. Joshua lands a big right and draws blood from around Ruiz’s left eye. Joshua 10, Ruiz 9.

SECOND ROUND: Ruiz stalking, but he has yet to land big. Now Ruiz does land, a left. Two jabs, in fact. Joshua reopens the cut with a hard right to Ruiz’s face. Joshua looks to be in control. An exchange of punches. Solid. Ruiz still stalking and Joshua on the move. Now Joshua lands another big righthand. But Joshua has suffered a cut over his left eye. Ruiz connects again. Joshua 20, Ruiz 18.

THIRD ROUND: More of the same: Ruiz pressing the action, and Joshua content to punch and move. Ruiz throws a big left and a right. Whiff, whiff. Boxers measuring each other. A lull in the fight here. Not much action. Joshua now firing jabs. And lands. Another stinging jab. And a hook to the body. Joshua 30, Ruiz 27.

Anthony Joshua dodges a punch from Andy Ruiz Jr during their heavyweight title fight between in Diriyah, Saudi Arabia on Saturday.
FOURTH ROUND: The 6-foot-6 Joshua keeping the 6-foot Ruiz at bay with that long jab. For now, anyway. More jabs from Joshua. Potentially racking up points here. Big right by Joshua. Misses. But the jabs still landing. Ruiz lands a notable jab. Then a right. Joshua landing jab after jab. Now throwing bigger punches, but they miss. Ruiz nails Joshua with a right. Feeling generous with Ruiz here on the scorecard. Joshua 39, Ruiz 37.

FIFTH ROUND: Joshua still looks in control by leading with the jab. But Ruiz sitll moving forward. Ruiz eating again — jabs from Joshua. Joshua just teeing off with that lefthanded jab. But Ruiz looks like he’s got plenty of energy left to unload if given a chance. Which is a big “if.’’ Joshua 49, Ruiz 46.

SEVENTH ROUND: Ruiz comes out with a very swollen face. Taking a beating from those Joshua jabs. Joshua lands a strong left hook and follows with a right. More of the same from Ruiz, and it’s not working. Plodding, plodding, plodding forward. Might need to start opening up. Joshua lands a couple of big punches. Looks like he might get drawn into a brawl again, and that could spell trouble. Another good right frm Joshua. Ruiz lands too. Joshua 69, Ruiz 64.

EIGHTH ROUND: Fighters in a clinch. Ruiz will need to take advantage of these situations — close quarters. No luck this time. Joshua showing he’s about more than the jab. Throwing bigger punches too — lefts and rights. Ruiz throws a signature chopping right hand to the top of the head. Ruiz lands a hard right to head. Follows up with a couple of other big punches. Ruiz at last makes presence felt. Ruiz now throwing big punches. Boxers exchanging words as round ends. Best round yet for Ruiz. Joshua 78, Ruiz 74.

NINTH ROUND: Let’s see if Ruiz can capitalize on his big finish to the last round. Doesn’t look to be in a hurry. Joshua looks more tentative now. Knows Ruiz has pop in those punches and is dangerous when they’re close. Now Ruiz landing some jabs. Back comes Joshua with his jabs. And Ruiz counters with a big right. Joshua 88, Ruiz 83.

10TH ROUND: Ruiz lands a right. Looks more comfortable now. Appears to be finding more openings, which were nonexistent in the early rounds. Joshua back to his early strategy — stick and move behind that jab. Ruiz gets in close and fires twice. Nothing big landing. This round is getting away from him. Joshua appears to be talking trash again as the round ends. Joshua 98, Ruiz 92.

11TH ROUND: Ruiz seems to understand he’s going to need to score a knockout in these last two rounds — or give up those belts to Joshua. Throws an awkward right. Nada. Another big right, awkward right. Nada, again. Joshua clearly not interested in brawling with Ruiz like they did in their first fight — certainly not that he’s now obviously leading big on the scorecards. Ruiz looks tired of chasing Joshua. And Joshua looks likes the Energizer Bunny. Joshua 108, Ruiz 101.

12TH ROUND: Ruiz looking to close the distance and get close enough to brawl. Looks desperate. And Johsua lands a big right. But he’s back to the same, jabbing and moving. Appears content to win this fight via scorecards. Blood leaking from above Ruiz’s eye — that cut never closed. Blood even running down his belly. Ruiz throws a big right. Looks way too late. Pleading to get Joshua to center of ring. Joshua 118, Ruiz 110.

Below are photos from the bouts

See full video of the fight below: 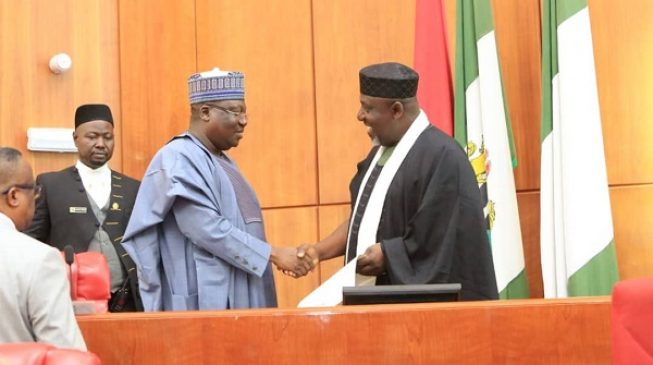 Okorocha calls for creation of happiness ministry to tackle suicide