I thought my husband’s kidnappers were robbers 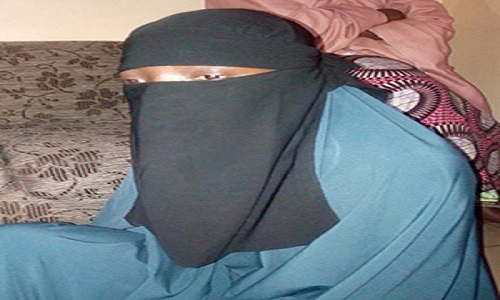 We haven’t lost hope of his return, say colleagues

It has been four months since Abubakar Idris, a lecturer with the Federal University Dutsinma (FUDMA), Katsina State was abducted from his Kaduna home in his own car. His wife, Khadija Ahmad, who said she hid herself watching the sad incident of her husband’s abduction, said she initially thought her husband’s kidnappers were car snatchers.

Speaking with our correspondent in an exclusive interview in Kaduna on Thursday, Mrs. Ahmad said she had suspected that something was amiss the moment Idris’s abductors walked into the compound as he made to park his car that night.

She said: “My husband arrived from a journey around 1 am on that fateful day. He opened the gate and drove his car into the compound. I opened the curtain and I saw him as he drove in. As he was about to alight from the car to go and close the gate, two people walked into the compound.

“I was still watching from the window when I saw the two men move towards him, one on each side of the car.

“I became suspicious and called one of my neighbours to explain what I had seen, saying that we needed to contact security. She dropped my call and called the police. She then called me back to say she had called the police, but that I should not panic or come out since we did not know who they were.

“When I saw them initially, I thought they were armed robbers. I was tempted to go out, but my neighbour called me again, asking me not to go out, that the police would soon come. Then she asked me for his vehicle’s registration number, make and colour of the car, and I told her.

“At that time, I even forgot to tell my neighbour that my husband was actually coming from Kano, not Katsina. He had told me that, he went to Kano from Katsina and that he was coming home from Kano.

“So, by the time the police came, I had forgotten all those details. I only told them that he was coming Katsina. It was later that I told them he went to Kano before coming to Kaduna.

“Initially, I didn’t know he was going to come home too until we spoke on the phone around 12 am. That was when he told me he was on his way back to Kaduna.

“Before I could leave the bedroom where I was watching them from to the sitting room, I discovered that they had put him back into the car. So, I called my neighbour again that, I was no longer seeing my husband standing, because I initially thought they were armed robbers planning to snatch his car. But she still asked me to calm down, that if God willed, the police would nab them.

“I don’t know how they came or whether they brought a car. But one of them drove out the car with my husband inside, while the other remained in the compound. He waited to lock the gate, then he went out too.

“So, since that night they drove him away in his car, his phone has been switched off and we have not heard anything. They have not called anyone.

“A while after they had gone away with him, the police came. The police came around 2 pm. They made calls and assured us that the culprits would be arrested; that they had called for every road to be blocked.

“One of the policemen that was calling their colleagues in other places told us that their colleagues had seen the vehicle heading towards Tudun-Wada, but since then, we never heard anything again.

“We the family are appealing to whoever is holding my husband to please release him. Whatever he might have done to them, they should please pardon him and release him. But, to the best of my knowledge, he did not have any problem with anybody.

“My husband is a very friendly person, he relates with people well, but he doesn’t hide his feelings about things.”

Concern over continued silence of abductors

The abduction of Idris, a lecturer in the Department of Languages and Linguistics at FUDMA, and the ominous silence by security agencies, the governments at federal and state levels and even his abductors who have neither spoken with the family nor demanded a ransom, has left the academic community and members of his immediate family in a despondent state.

Summing up the concern of the academic community over Idris, his colleague and Chairman of the FUDMA branch of the Academic Staff Union of Universities (ASUU), Comrade Yahaya Mohammed, said: “On October 11, 2019 the branch submitted a letter to the office of the Commissioner of Police, Kaduna State, formerly reporting the case and soliciting his quick intervention to trace his whereabouts, but up till now, there has been no positive response.’’

Similar requests allegedly made by the union and the family of the abducted lecturer made to the Governor of Kaduna State, Malam Ahmed el-Rufai through his deputy was also said to have suffered the same fate till date.

The ASUU boss added: ’’We call to formally notify Nigerians of the mysterious abduction of one of the branch members. He was abducted from his residence at Shagari Low-cost, Barnawa, Kaduna State on the 2nd of August, 2019 at about 1:00 a.m. by unknown persons.

“Mr. Abubakar Idris is a lecturer in the Department of Languages and Linguistics, Federal University Dutsinma, Katsina State. His family formally reported the case to the police and other security agencies in the state, but no positive response has been received from any security agency.

“His abductors have till date neither called for a ransom nor stated any other reason for his abduction. If he has done anything or committed an offence, he should be brought before the court of law and charged.’’

He recalled that the union submitted a letter to the Kaduna State Commissioner of Police on October 11 this year, soliciting his quick intervention to trace Idris’s whereabouts but there was no positive response.

The union viewed the abduction of its member as inhuman and an abuse of his basic human right, leading to tension and uncertainty among the members of the university community and his family in particular.

ASUU therefore implored the security agencies to be more proactive in “finding out the whereabouts of our missing member and his immediate release. We also appeal to well-meaning Nigerians to support us in this crusade.”

On its part, the management of FUDMA called on ASUU nationwide and other Nigerians to pray for the release Idris, who is being held without trace.

A statement issued by FUDMA’s Acting Director Public Relations and Protocol, Habibu Matazu, also appealed to his abductors to release the lecturer.

He said: “The university notes that since the abduction, there has been no trace of the victim, as there was no demand for ransom or any other lead as to his whereabouts.

“The university’s management had reported the matter to all the relevant security agencies and Governors El-Rufai and Aminu Masari for their intervention.

“It is inhuman and an abuse of human rights the abduction of a family man like Abubakar Idris whose detention had generated tension and uncertainties for members of the university community and his family in particular.

“The university appeals to his abductors to kindly release him so he can report back to his work place and loved ones.”

The management also assured members of the university community that it would not relent in working more closely with security agencies to get the lecturer back home safely.

The statement added that the management had approved financial support for the family of Idris and had delegated a three-man committee to sympathise with them over the incident.

The lack of reaction from the security agencies and the Kaduna State Government over the kidnap of the varsity lecturer appears most worrisome, considering the fact that past cases of abduction and criminality in the state were given wider publicity and followed by relevant agencies and the state government.

Previous incidents of abduction in the state, including the abduction of school pupils and their teachers at a secondary school on Kaduna-Abuja Road, were constantly in the news with regular updates by security agencies and government until the victims were eventually freed with or without ransom paid on their release. But in Idris’s case, there has been absolute silence or contradictory response from those concerned.

Gambo Isah, a Superintendent of Police and spokesman of Katsina State Command, absolved the command in the case when he reminded The Nation during an exclusive interview in Katsina that the crime was committed in Kaduna State hence it is the response of the Kaduna State Command that should be sought in the matter

We haven’t lost hope of his return — HOD

When our correspondent visited the Department of Languages and Linguistics, Federal University of Dutsinma to seek their reaction on the missing lecturer and colleague, the mood among the members of the department and students was pensive.

Dr Oni Funke, the Acting Head of Department of Language and Linguistics, said the department was still waiting for him to resume his teaching duties in the department.

She said: “The university has not retired him or relieved him of his appointment, so his work is here waiting for him. The school has been magnanimous to him, knowing he did not abscond from duty; just that he was kidnapped.

“His abductors should show mercy, he is a family man. I am sure his wife and children are missing him.

More in this category: « Father of 15 allegedly chains and drags daughter through the streets for missing school 'Hungry' man, 21, arrested for beheading a woman before 'eating her brain' with rice »

This is wrong!: Tiwa Savage threatens to sue Fatoyinbo, COZA