Following the decision of the supreme court affirming the rights of Muslim female students in Lagos state to wear hijab to school, Malcolm Omirhobo, a Nigerian lawyer, has caused a stir by dressing as a traditionalist while appearing in court. In this interview with TheCable, the lawyer speaks on his unusual dress style, and what he thinks the supreme court would do regarding the hijab verdict.

TheCable: Are you against the supreme court decision on hijab because you practise another religion? 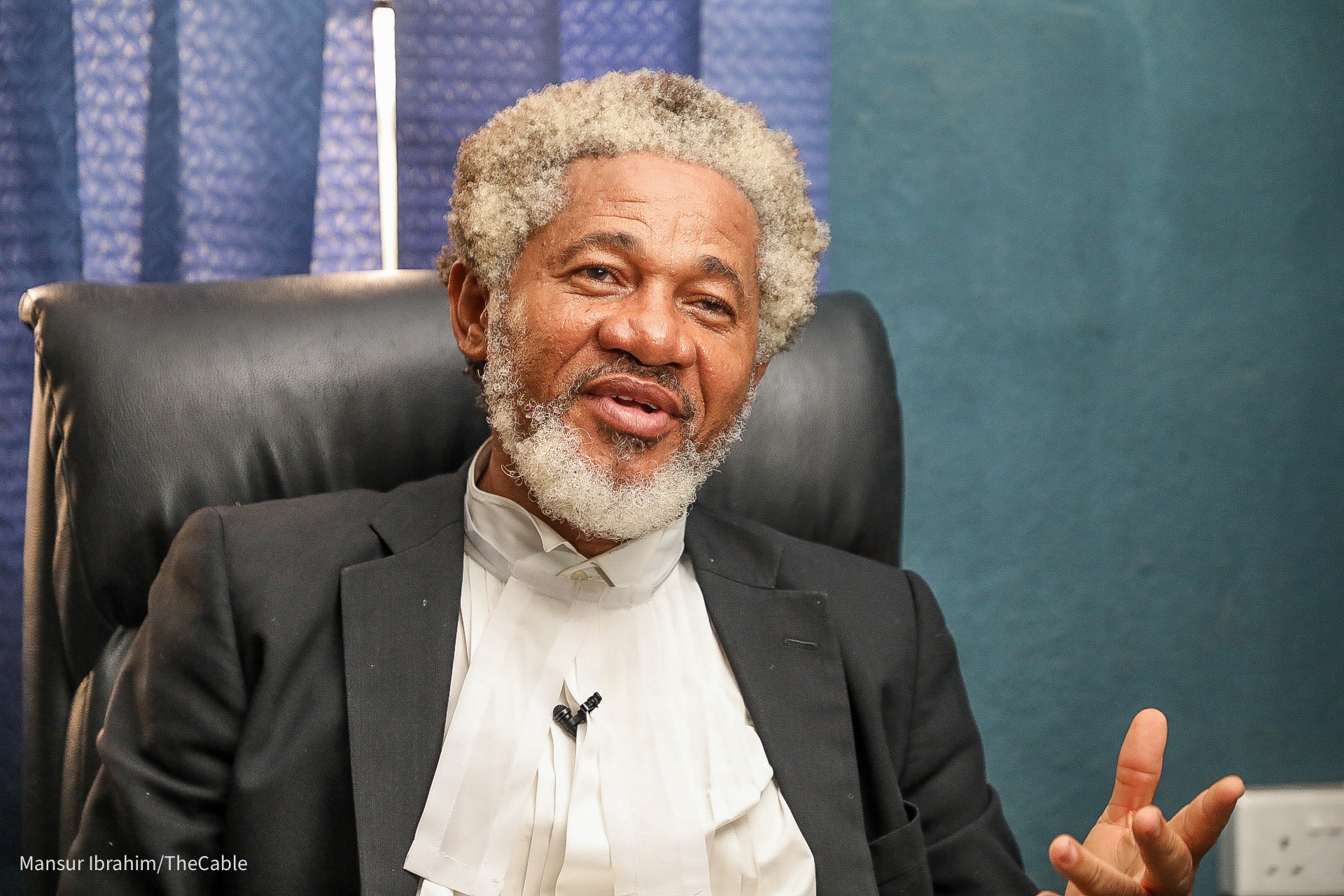 Omirhobo: I’m not particular about the hijab. The truth of the matter is that we are looking at the secularity of Nigeria — that all religions are equal and no religion is above the other. That is to say Nigeria has no official religion, so no religion should be favoured. What is good for religion A is also good for religion B and C. Nigeria is a multi-ethnic and multi-religious nation, and we must respect each other’s religion.

TheCable: What is your position on the notion that wearing traditional regalia to court is not equivalent to the use of hijab? 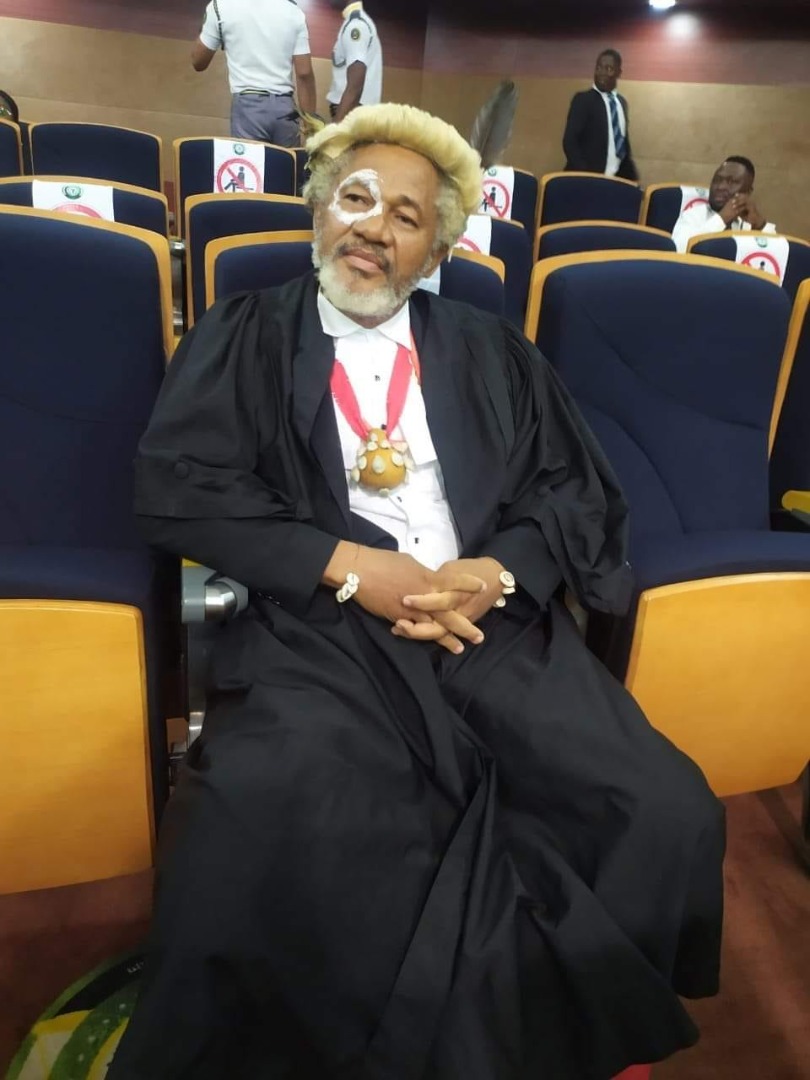 Omirhobo, dressed in traditional attire, in a courtroom in Abuja.

Omirhobo: Who are they to question my spirituality or my religion? My religion is my religion; it’s something private to me. How I worship, how I pray, how I communicate with my god(s) or ancestors or divinity is my personal thing. It’s none of their business. The whole issue is that there is no difference between the hijab issue and if a legal practitioner dresses the way I dressed, there is no difference. Uniform is uniform. The black, white, wig and gown are uniforms. The school uniform of those students is a uniform.

When those students came to the school, they were told they were going to wear some certain type of uniform. You cannot come into the school and say you want to add your own to the uniform; it’s not possible. But the supreme court has ruled that it’s possible — that students should wear hijab and that it’s their mode of worship and any attempt to stop them will violate their rights as per section 38 of the 1999 constitution.

What I did was in line with the constitution, and the supreme court decision. So, I don’t understand what the court was saying when it said I do not have the right of audience.

TheCable: Some of your colleagues have criticised you, saying you’re doing it to draw public attention. Is this correct?

Omirhobo: That’s insulting, I have not been in the public glare before, but do you know that I have been on this case for more than 10 years? Do you know I’m the most litigious lawyer in Nigeria and Africa? I have filed so many cases on behalf of the public. I have filed cases that should be in the Guinness Book of World Records — which is over 1,870 paragraphs. It cost me over N1.8 million to file that case.

So, I don’t know why they call me a media lawyer, just because this one just went out. It’s insulting. I’m not seeking anybody’s attention. What I’m fighting for is the secularity of Nigeria, so that Nigeria should return to where we put religion as something private not in the public.

TheCable: Do you not worry that you may be disbarred?

Omirhobo: I don’t have the fear of disbarment. And If I have to be disbarred for saying the truth, the obvious or fighting for the public, so be it. I’m ready to sacrifice anything. What is the status quo? A wrong status quo. It doesn’t mean that if 1,000 people are wrong and I’m right, it doesn’t change the fact. The fact remains. Even if one million lawyers or Nigerians say I’m wrong, as long as I know I’m right, it doesn’t make them right. I’m ready for disbarment, even if it will cost my life. I don’t mind; I’m not scared of anything.

TheCable: In all of this, what is the sole intention that you wish to achieve? Omirhobo: If what I’m fighting for is achieved, a teacher would not have to come to class and physically identify students based on religion or their mode of dressing. It won’t go well for the country if we start putting religion before the public. It will bring about disunity, hatred and distrust. If these things are not there, we will work as a team, as a family and move the country ahead.

Look at America, religion has been taken away from the grip of the government. I’m looking at a situation in which we will operate a secular state, where religion will be taken away. When you’re in your house and community, you practise your religion there. But when you’re in public, you don’t. Religion is not a state’s affair, and if we leave it so, it will advance us. If we do that, it will kill away the religious problem that we have in this country. At least, it will now remain ethnicity.

The two evils of Nigeria are ethnicity and religion. So, if you take out religion, we still have one issue to deal with. That’s what I’m fighting for.

TheCable: What will happen if the supreme court does not overturn its decision?

Omirhobo: They will reverse it. We are just starting; we will follow it up. We have a long way to go. We’ll still take this case to the supreme court in one way or the other. Maybe not directly reverse, but there will be a decision that will kind of overshadow this one. There is something they call locus standi. In law, before you bring a case to the court, you must have sufficient interest. So, most times, especially when it’s public interest cases, when you bring it, they will throw it away and say you don’t have locus standi and that you’re just an individual.

But gradually, we started moving away from it, thanks to Gani Fawehinmi who pursued it to the extent where the court now said an individual, as long as you can prove that you have sufficient interest in a case or a matter, you can be heard. That case where they say you can’t be heard is that of Abraham Adesanya vs federal government. When some people cite this, the court would say it has advanced beyond that, that the case you should be citing is Fawehinmi vs federal government.

So, it will come to a time when you’re citing this last case that gave judgment on the hijab, they will tell you that it’s an old decision. That is the way the court reverses itself — by a more recent decision.

Another way is that if the leaders are sincere, they can sit on the issue of the hijab and inform the house of assembly to pass a law that nobody will wear religious attire to the place of work. Once they pass that law, it becomes a statute.

TheCable: Are you ready to wear your traditionalist regalia till either of the two scenarios plays out? 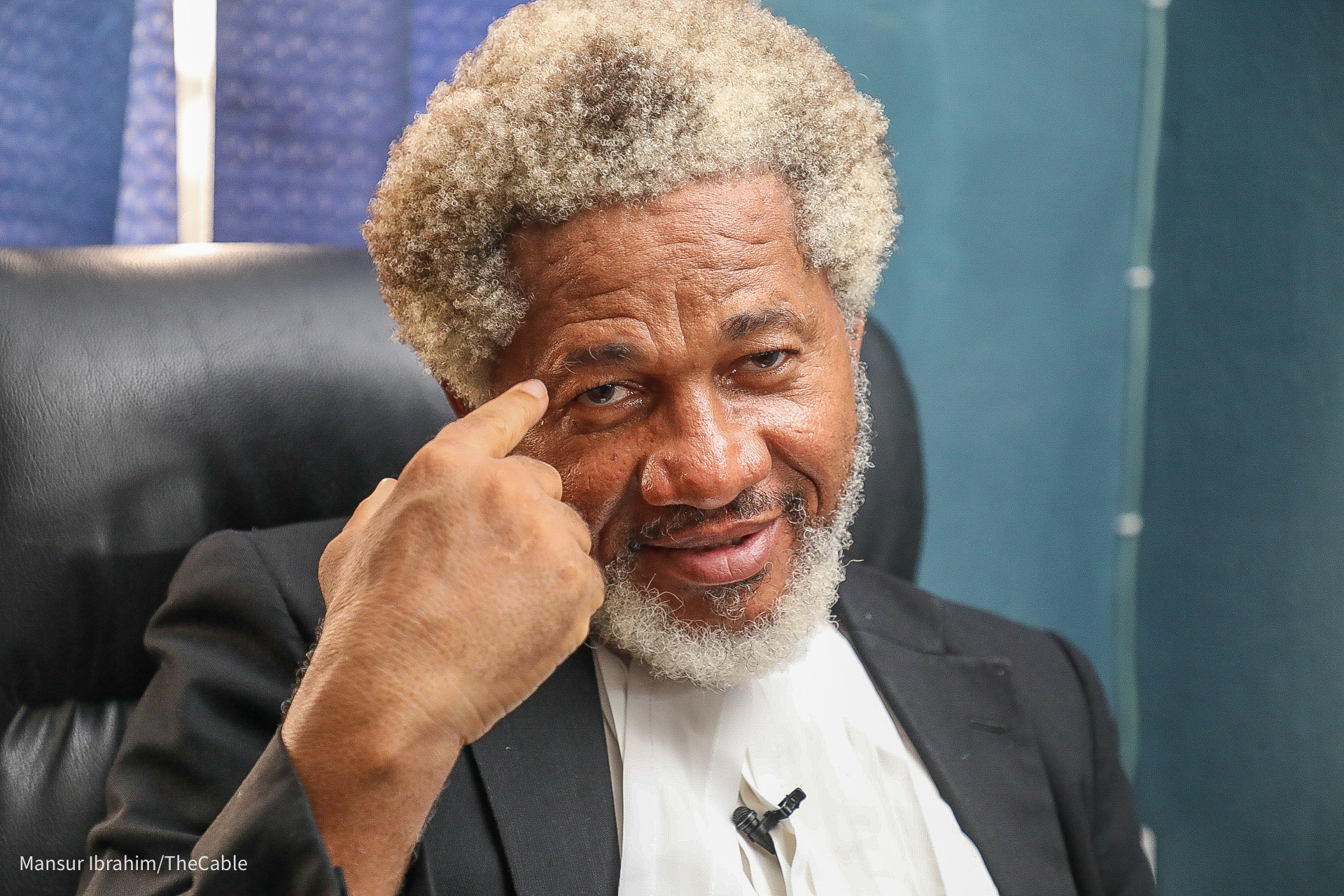 Omirhobo: It depends on the leading of the spirit. Olokun is a dynamic spirit. I consult before I leave the house. Someday, it will tell me to put the spiritual eye on and wear my beads and to make sure that my legs are touching the ground because that will save my life.

TheCable: But Muslims don’t have to pray to Allah for permission to wear their hijab. 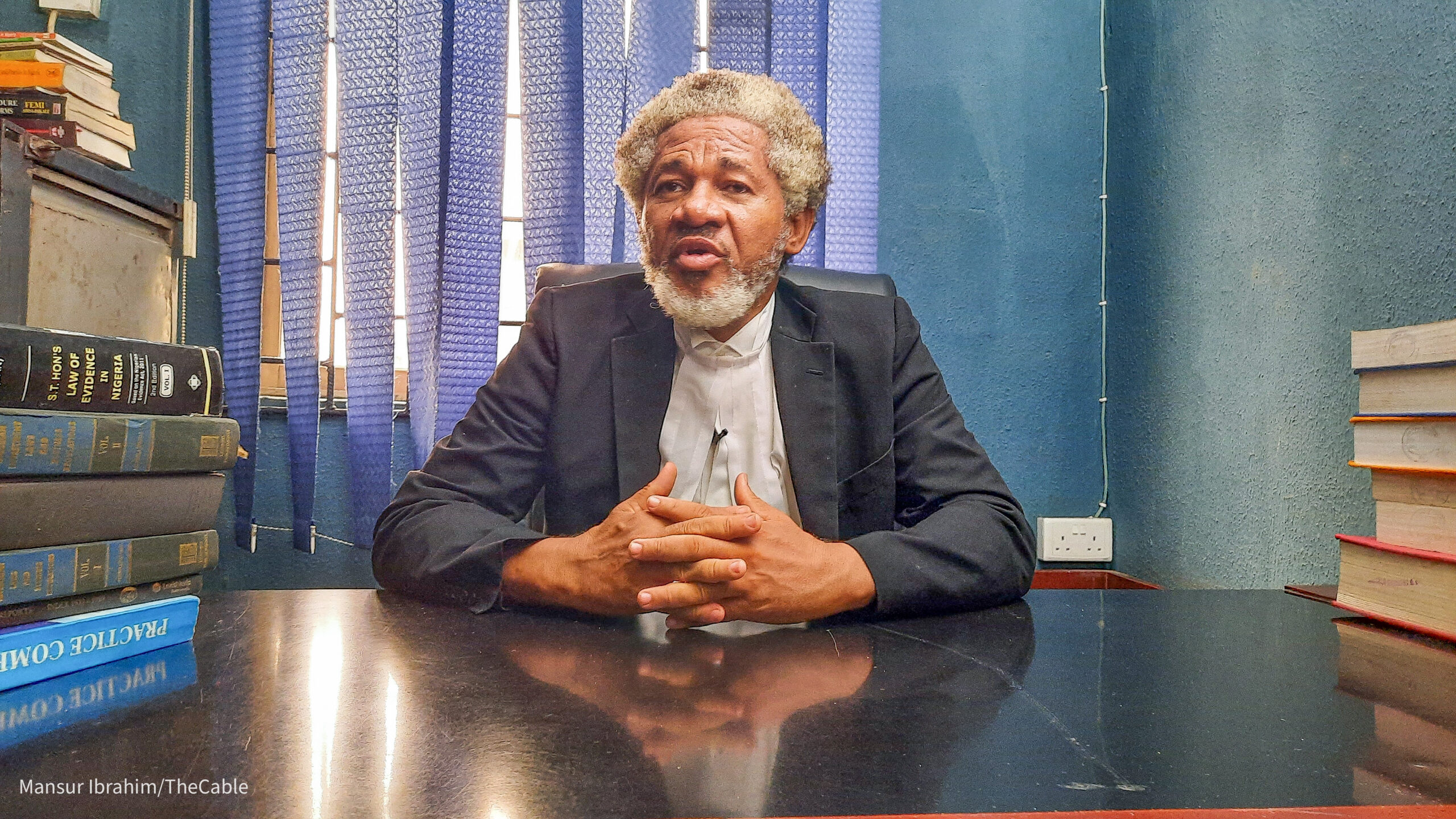 Omirhobo: I attended more than six primary schools. I had my secondary school in Isolo Grammar School. I’m one of the beneficiaries of Jakande. I did free education for five years and I didn’t pay a dime. I did my A levels in Suleja federal school of arts and science, and from there I went to BENSU where I read economics education as a first degree. I served in Minna, Niger state. I proceeded to Rivers State University of Science and Technology, where I read law and I went to law school in Lagos. Education is continuous, so I intend to go further.

I do general practice, but basically, I see myself concentrating more on constitutional law, because of my love for the needy, oppressed and voiceless. I have a foundation. We have done a lot of donations. During COVID, we covered the prisons and police stations in Lagos state. Almost all the homes for the old and orphanages, we went there to donate sanitisers, soaps, water dispensers and all that. I also do lot of pro bono cases.

BBNaija: Beauty’s brother under fire for saying ‘she gave the most content’

2023: El-Rufai Speaks On Joining PDP As Party Chieftain Woos Him

Wike: We will teach those underrating Rivers lesson with our votes

Ex-Govs Dariye, Nyame jailed for fraud, out of prison - 4 Months After Pardon

2023: Tinubu Will Be Next President – Yoruba Elders